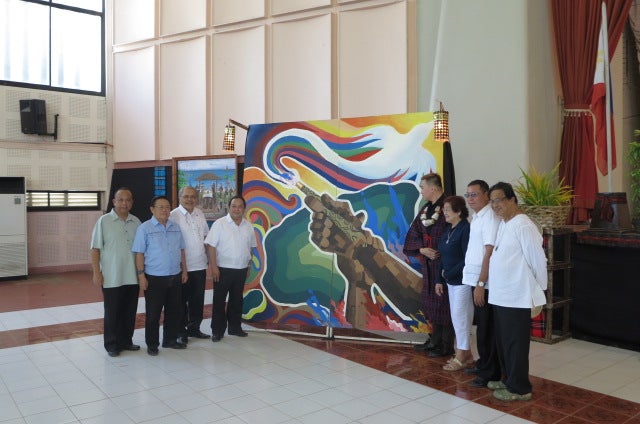 ‘Cultural renaissance’: Bohol strives to rise from the ruins

DESPITE the massive damage inflicted on the province by the 2013 earthquake and 2014 Tropical Storm “Seniang” (Jangmi), the Bohol provincial government and local artists and cultural workers continue their show of unity to revitalize and promote the province’s cultural destinations.

This undertaking was stressed recently by local officials led by Gov. Edgar Chatto during the opening program of the 2015 National Arts Month at the Bohol Cultural Center in Tagbilaran City.

The event, with the theme, “Highlighting local cultural genius to promote pride of place: Boholano artists transcending all challenges,” was organized through the National Commission for Culture and the Arts (NCCA) and the National Museum.

Highlighting the event were cultural performances by the Vanguardians Dance Company, Bohol Master Singers and Bohol Island State University’s theater group, and the unveiling of a commemorative mural done by the College of Architecture and Fine Arts students of the University of Bohol.

“The artist’s flare of imagination should continuously be fueled. It is therefore important that they recognize the art that is their own, take pride in it and develop their transforming capacities,” said Napeñas quoting De Leon.

It is in this sense of pride that the local government is stressing the importance of culture and the arts.

“We encourage the young people to look back to their own cultural roots so that these will not die out,” said Marianito Luspo of the Bohol Arts and Cultural Council.

“We are very, very conscious here in Bohol of preserving culture, and we hope that through this the advocacy of the provincial government for the cultural renaissance would be fast-tracked,” he added.

Luspo said this was part of the eco-cultural revitalization of Bohol especially after the earthquake of 2013 and “Seniang” in December 2014.

An example of that revitalization is the Santa Monica Church in Alburquerque town, a structure declared as an important cultural property by the National Museum. 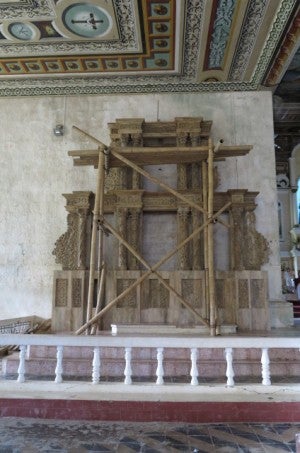 Restorations on the Alburquerque church were already being done before the earthquake of 2013, according to Luspo.

The old ceiling with paintings was brought down in pieces and replaced with a new one painted by famed artist Guy Custodio. The torn-down pieces of the old ceiling were framed and now can be seen at the first floor of the church convent.

The church-side retablo are also being replaced by Baroque-style retablo carved by local carvers. The main retablo will also be replaced.

Leading these carvers is Arsenio Lagura.

“They don’t have a tradition of woodcarving,” said Luspo referring to the people of Alburquerque.

“It just happened that they need that, and they discovered a local carver who’s not really a carver at first. He was an ordinary carpenter who dabbles into carving,” he added.

Lagura has now a following, and they are doing intricate carvings for the church.

“I believe that if given the opportunity and they see they are being appreciated for it, [I think] we can still revive an ancestral craft here in Bohol,” said Luspo, adding that this could eventually provide employment for the locals.

Luspo stressed the need for more local stakeholder involvement in the restoration and reconstruction of the churches “because these churches were built through the efforts of our elders.”

“We cried a lot during the aftermath of the earthquake because we feel that somehow we are umbilically tied to these structures. These are not just structures, they are part of who we are as a people,” he said.

Luspo said locals were left out during the experts’ conference on the Bohol rehabilitation in November 2014. He said they were made to sit only as observers.

“If we build these structures again, we don’t want to cut that umbilical connection,” he said. “This can be done only if they feel part of the reconstruction.”

Aside from the paid workers, Luspo said volunteer work from the ordinary people should also be encouraged, “simple jobs that will remain with them and further the bond between the structure and the people.”

“Kung hindi nila i-consult ang locals (If they are not going to consult the locals), they would miss these small details [of the churches] that really go into the whole picture.”

Luspo said the National Museum had already been informed about this concern. He said he hoped for a deeper partnership between experts, funding agencies and locals.