Family is in the details | Inquirer Lifestyle ❮ ❯ 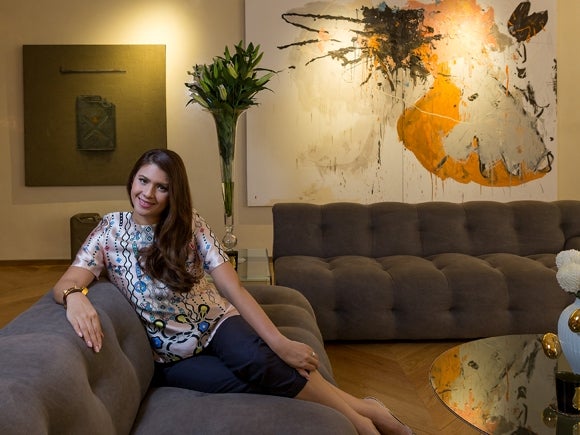 Family is in the details

After living in her mother-in-law’s Makati condominium unit for six years and in her parents’ Quezon City home for several months, Baby Magazine editor in chief and Cocoon columnist Juana Manahan-Yupangco knew exactly what she wanted when it came time for her and husband Rick to finally invest in a place of their own.

Partial to the practicality of condominium living, the Yupangcos were also keen on amenities for their two children, six-year-old Jaime and Rosanna, three. A search led them to one of the older residential towers in vibrant Taguig City.

Boasting bigger cuts than the newer developments, the 15-year-old edifice also enticed the young couple with its sprawling garden, playground and pool area. “They also have a parlor here,” says Juana enthusiastically. “When I found out, I was like, ‘Here, here! I want to live here!’”

At 298 square meters, the three-bedroom unit proved the perfect blank slate, so to speak, an opportunity to apply lessons on decorating she learned from the past. “I was 25 when I got married, and I just kept buying things that looked cool and funky but didn’t serve a purpose,” says Juana. “After two or three years, I told myself, ‘Why did I buy this? What was I thinking?’”

With interior designer and childhood friend Chat Fores on board, the couple “literally got rid of half of our old stuff,” says Juana, and instead focused on achieving a space “that would give you a sense of who we are as people, what our personalities are like.”

“Art lovers” is the first thing that comes to mind when you walk into their bright, super-spacious abode. Though their taste appears varied—there’s a Gus Albor mixed-media piece in the foyer and a muddy green painting of a reserve tank and its three-dimensional counterpart by Bembol de la Cruz in the living room—it’s clear that the couple favor oversized, colorful and busy visual art.

Appropriately, the walls they are hung on are of a neutral hue; the lightest of yellow in the living room and a serious gray in the dining area allow technicolor paintings to pop.

Furnishings are likewise subdued in style and color. Save for the modern yellow Hydra Enif chair by Poltrona Frau (an item Juana had admired when she spotted it during her first job for another magazine years ago), the cushiony gray sofas, ottoman, and black-and-blue chaise lounge from French company Roche Bobois, as well as the lean, linear dining set from Molteni & C and metal Chinese chairs from Caligaris do not distract the eye from admiring a room teeming with bold art.

Aesthetic inputs also came by way of Juana’s creative family. Her dad (foremost director Johnny Manahan), mom (noted surface decorator Tats Rejante-Manahan) and sister (home accessories designer Lilianna Manahan), were so into the nitty-gritty of the renovation and design of Juana and Rick’s new home, for a while, it was the hot topic of their gatherings. (“Oh my gosh, what are we going to talk about when she moves in?” Lilianna complained jokingly.)

“My family is so… interactive,” says Juana with a laugh. “You cannot do anything without them saying something.”

Still, she is proud of their contributions.

Lilianna’s various creations, from an organic plant arrangement that reminds Juana of a coconut drink (“all it needs is a straw,” she quips) to a menagerie of quirky animal accents, are found all around the house, as are sentimental keepsakes from dad. As they were growing up, a sculpture of a child with missing hands, possibly an angel, says Juana, was a fixture in the Manahan girls’ bedroom. Johnny gave the piece to Juana when she gave birth to Rosanna; the piece is now part of an eclectic setup in the foyer. The director also gave his daughter framed Chinese prints from home and a painting by Francesca Enriquez as a housewarming gift to the couple.

Meanwhile, Tats’ jaw-dropping contributions range from meticulous hand-painted walls in the powder room and Rosanna’s bedroom, to a unique and painstaking wall treatment involving layer upon layer of Italian plaster. Sporting faint brush strokes and a high-gloss finish, the result is often mistaken for marble or granite. “I made my mom promise not to do it for anybody else!” announces Juana gleefully.

Of course, the man of the house had his say, too. Rick, whose portrait by Bembol de la Cruz, hangs at the end of a short corridor leading to the bedrooms, didn’t stop until he tracked down someone to assemble the chevron-pattern wood parquet in the living and dining areas.

Another unexpected element, the changing light colors in the dining area’s ceiling, was also his idea. “We thought he’d be modern and clean,” says Juana of her husband’s style, “but his taste is actually funky and bright. When my mom painted his ‘man cave’ in our old place, he asked for red and purple.”

Admittedly, this young mom of two growing children didn’t factor in the child-friendliness of their interiors. She didn’t have to: Raised by their parents to be respectful of their and other people’s homes, Jaime and Rosanna do not plant stickers anywhere or knock down décor as they chase each other around the house. “When their playmates see our couch, they immediately want to jump up and down on it,” says Juana. “Jaime is the one who tells them, ‘No jumping on the sofa!’”

But boys will be boys. When his mom beckons him and his sister to continue drawing in the kitchen, Jaime follows—by sliding to the room with his tummy on the floor. Juana can only smile at her eldest’s antics; this is home, after all.