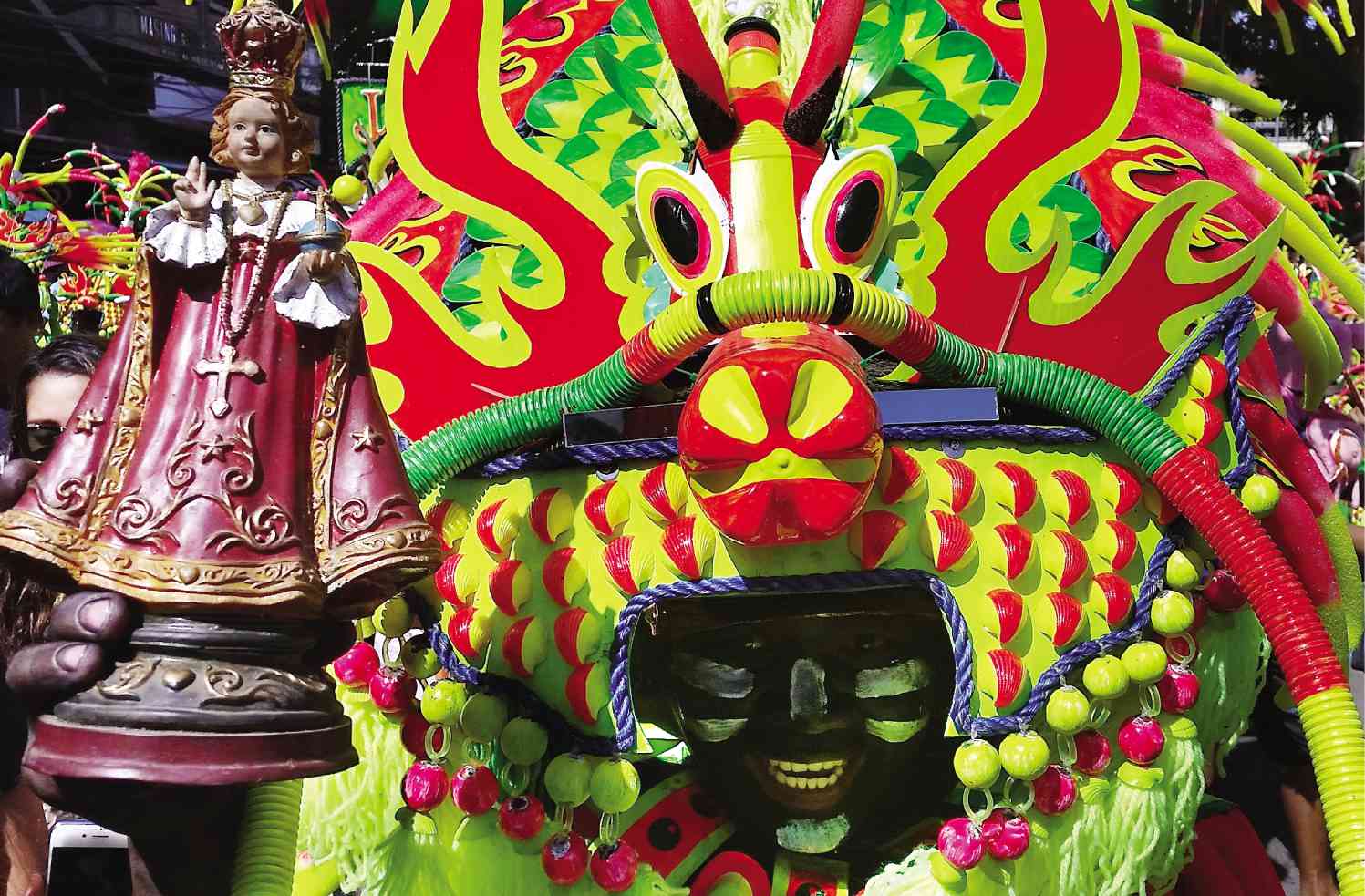 DRUM AND DANCE The street-dancing contest of the Kalibo Ati-Atihan Festival draws dancers from 20 Ati tribes on Saturday. Shown here is a dancer holding an image of the Santo Niño as he leads his companions in performing to rhythmic drumbeats along a main street of the city. The festival is held annually in honor of Señor Santo Niño de Kalibo. NESTOR P. BURGOS JR./INQUIRER VISAYAS

KALIBO, AKLAN—Hernany Lao lined up along with hundreds of devotees at the St. John the Baptist Cathedral here.  When his turn came, a lay worker placed the feet of a six-inch wooden image of the Child Jesus Sto Niño de Kalibo on Lao’s head and gently moved it to other parts of his body.

“I prayed that I would be cured of diabetes,” Lao said, adding he has participated in this healing ritual known as “paepak” (to be stepped on) for the past 50 years.

The paepak is one of the highlights of the annual Ati-atihan festival, one of the oldest and most popular festivals on Panay island, which will culminate this weekend with its well-known street dancing contests and general revelry.

But for many ordinary people who trek to Kalibo every third weekend of January, the come-on is the paepak ritual and devotion to the Sto Niño de Kalibo. Since Jan. 8, throngs of devotees have been lining up at designated stations, open from from

Editha Macahindog, 25, of the neighboring town of Banga, came  with her husband and two children. “We try to come here every year. We only fail to be at the paepak when there are too many people and the lines are very long,” she said. They brought their 1-year-old son, Nikko Jay, who was coughing, and daughter Neskierubin, 4, who suffers from asthma.

“I pray that they will recover from their ailments,” Macahindog said.

For healing and protection

Lay workers who administer the rite noted that more devotees had come for  this year’s paepak and Ati-atihan.

The devotees, many with loved ones with disabilities and ailments in tow, pray for healing and for protection against disease. Devotees also bring their own images of the Sto Niño and other religious items to have them blessed by priests.

Chona Sobremesana, 59, who joined the festival for the first time, traveled from Bacolod City with a friend and former classmate.

“I felt compelled to come here. Maybe it’s a call from the Lord,”  she said.  Unlike other festivals, there is a deep sense of religiosity in the Ati-atihan and the focus is on one’s faith, she said. Chona  bought a 12-inch  image of the Sto. Niño which she had blessed by Fr. Joesel  Quan, one of  eight priests at the cathedral.

Quan said devotees had come from as far as Catanduanes and other parts of the country.

Eight tribes joined the Balik-Ati category or those that use indigenous materials  such as abaca fibers, shell, and feathers and leaves. The Tribal Small  category (maximum of 60 warriors) had six competing tribes while the Tribal  Big (more than 60 and maximum of 120 warriors) had eight participants.

The winners will be announced on Sunday evening.

On Sunday morning, a Mass will be celebrated by Kalibo Bishop Jose Corazon Tala-oc in front of the cathedral.  In the afternoon, a religious procession and street dancing are expected to be joined by tens of thousands of devotees and revelers hoisting images of the Sto. Niño on the main streets of Kalibo. The procession, expected to last at least eight hours, will culminate on the grounds of the cathedral.

Ati-Atihan festival kicks off in Aklan

Santo Niño through the ages