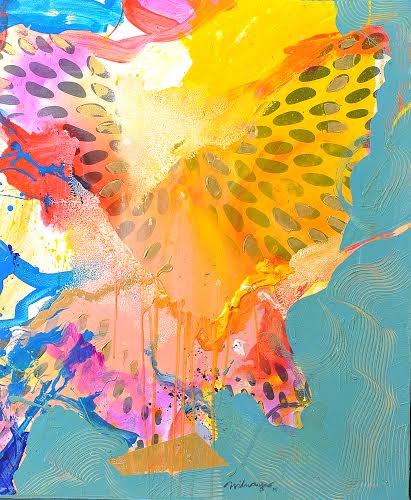 AS CURIOUS children we observed with rapt fascination the repeated “eyes” around the pineapple which Mother was about to peel.

Out on the beach, we lay on the sandy shore, awaiting with thrill the endless rushing of wave upon wave washing over us.

Indeed, as art students, we learned that the most famous Oriental painting was Hokusai’s “Great Wave.” More incredibly, centuries ahead, the Renaissance genius Leonardo de Vinci, in his Deluge sketches, did the same repetition of curling little waves.

These experiences and memories came rushing back to mind, yes, like waves, when we were invited by the artist Edwin Wilwayco to view his latest series of works on the theme of fractals! Fractals was first used by the Polish-born, French-American mathematician Benoit Mandelbrot in 1975. He derived the word from the Latin fractus meaning “broken” or “fractured.” Thence he “extended the concept of fractional dimensions to geometric patterns in nature.”

In the case of Wilwayco’s Fractal works, critic Josephine Fatima Martins had referred to the artist’s substrate, the underlying fabric that has been printed with fractal designs.

What Wilwayco has done to this substrate is to engage it in a skirmish of his own volition, setting up a tension by asserting his own fractal trademarks in the form of repeated furrowed lines, effected from the “combing” of a top layer to reveal the multiplicity of colors and designs underneath.

While the substrate underneath may be regarded as pre-fabricated, the artist’s armory of fractal devices are his own sheer fabrication. Between the two, the viewer perceives a contrapuntal encounter, by turns, adversarial in their competitiveness and collegial in their amicable harmony of colors and shapes. Their intensity of one is modulated by the other; each is either a heightening or a weakening of the other; the gracious give-and-take is the artwork’s awareness that the measure of the painting’s “success” is their compatible interchange.

Moreover, what is palpable is the contrast between the permanent state of the fabric fractals and the unpredictable fractal potentialities of the pigments, in the seemingly restless hands of Wilwayco, who has already proven himself as a master manipulator of oils.

Through four decades of oil painting, Wilwayco, who was mentored by the pioneer exponent of Abstract Expressionism in the Philippines, the late José Joya, has acquired such an identification and an affinity of feeling with the material that he can now liken himself to a juggler capable of throwing bowls of colored pigment up into the air and knowing with sureness where each will land, transforming whatever “accidents” that may ensue as being willfully ordained from the start.

For while the fractals can proceed into infinity, a series of paintings presupposes a beginning and an end. After all, Monet could paint only so many haystacks and cathedrals; the apples of Cézanne’s eyes were by then overripe; and Josef Albers knew there were limits to his squares within squares. And as for Wilwayco, he is fully aware that, whether the series continues or not, his fractal attraction will always be there to color his existence.

On the occasion of its 10th anniversary, Artes Orientes gallery at Serendra presents Edwin Wilwayco’s celebrated “Fractals” series in “Fractal Attraction.” Exhibit opening reception is on Jan. 23, 7 p.m. Artes Orientes is on the second level, The Shops at Serendra, Bonifacio Global City, Taguig. Exhibit will run until Feb. 5.