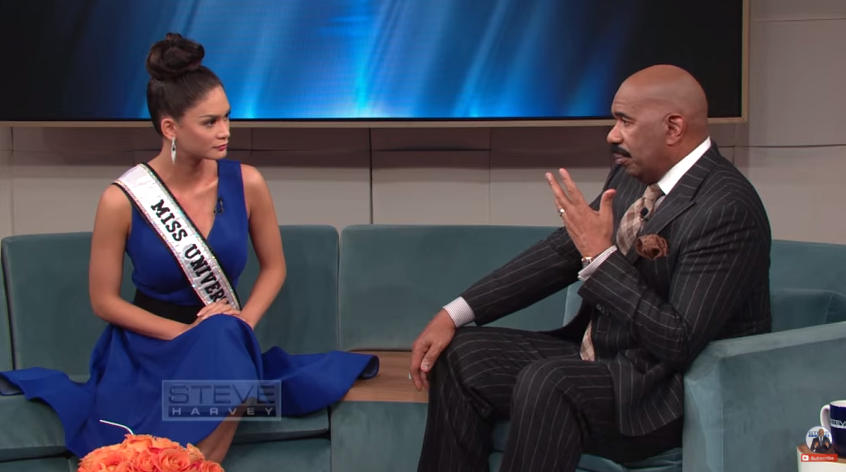 Almost a month after he fumbled announcing the correct Miss Universe on live TV, host Steve Harvey finally got a chance to do a sit-down interview with winner Pia Wurtzbach, and called her an “absolute class act” for accepting his apology.

During the pageant’s coronation night last December, Harvey mixed up the results of the pageant after he initially announced Miss Colombia Ariadna Gutierrez as the winner.

He later apologized and declared Wurtzbach as the rightful winner.

During the interview on the “Steve Harvey Show,” Wurtzbach recalled keeping a “safe distance” from Gutierrez because she was concerned with how the latter was feeling.

“I tried to keep a safe distance from her so as not to disrespect her. I didn’t want her to feel bad. I was being sensitive to her feelings. So when I was standing there, I was very happy, I was excited. But I was also thinking about her; I could not help but think about how tough this must be for her,” Wurtzbach said.

Harvey apologized again, saying he hopes there could be healing for Wurtzbach and Gutierrez, and that he wished they “could have all gotten it right” during the night of the pageant.

The 26-year-old beauty queen from Cagayan de Oro City said that while the controversy has shadowed her coronation, she hopes that she would still be able to inspire many people.

“I wish I had more time to tell people about my life back in the Philippines. It wasn’t easy,” she said.

“But I think I have the whole year to tell them about my story. And I do hope that I get to inspire people that people could throw stones at you but, I read this one quote, “a real queen knows how to make an empire with the same stones thrown at her,” so that’s what I want people to learn,” she added.

She then consoled Harvey, who admitted earlier in the show how difficult it was for him and his family to deal with the backlash following the mix-up.