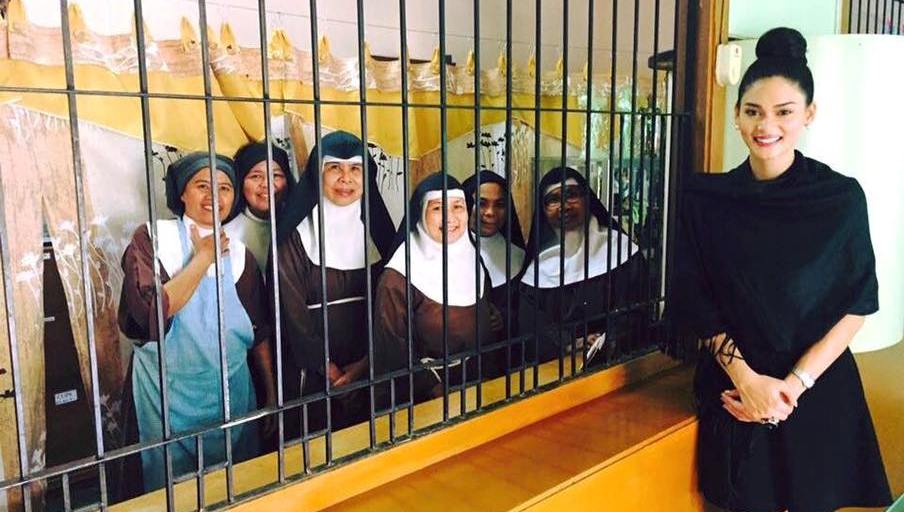 Pia Wurtzbach with the Poor Clare nuns of Kidapawan behind convent grills, before she flew to Vegas for Miss Universe pageant

Before Miss Universe, Pia asked Poor Clare nuns to pray for her

“Aseldom mentioned aspect of the personality of Miss Universe Pia Alonzo Wurtzbach is her religiosity. It is understandable in a world where vanity and physical attributes are believed to be of great importance.

“Before she flew to Manila to proceed to the Miss Universe contest in the US, Pia was invited to an event in North Cotabato. While she was in Kidapawan City, she asked if there was a nuns’ convent in the area. She was brought to the nuns of the Monastery of St. Clare in Balindog, not far from the city; 25 years ago these nuns came from the monastery of Santa Clara in Katipunan, Quezon City.

“The rest is history. Even with the momentary hesitation about who the real winner was, everything was straightened out and Pia was crowned Miss Universe 2015.

“When she returns later this month, she might remember the nuns in Kidapawan; but even if she would be too busy to visit them, she has affirmed that those women who have given their lives to prayer and contemplation in the cloister are ‘beauty queens’ in their own right before the Lord.

“Miss Universe has set a precedent that the Poor Clares’ prayers are answered, not just for good weather and successful exams, but even for winning an international beauty contest.”

He said the dramatic victory of Wurtzbach in the Miss Universe—made more dramatic by the well-known
“comedy of errors” that accompanied it—should show the power of prayer and that beauty is also “inner.” Definitely, it showed that the Poor Clare nuns of Kidapawan are “beauty queens” in their own right.