Miss Colombia chides Steve Harvey: You have to learn how to read | Inquirer Lifestyle ❮ ❯ 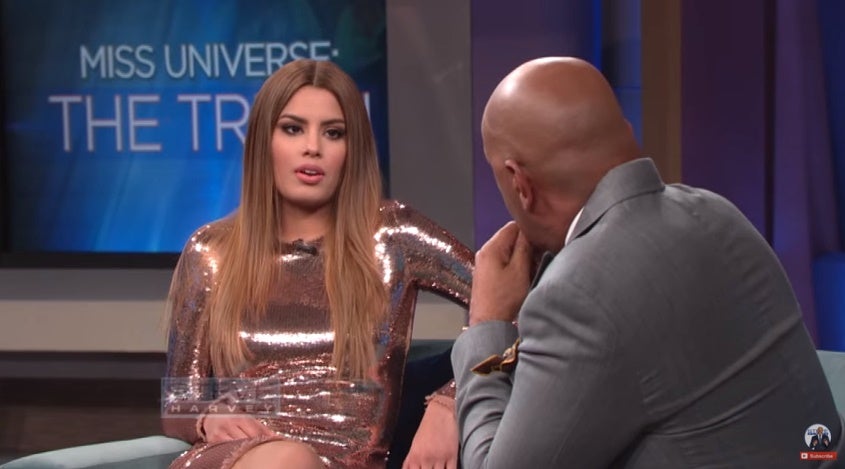 Miss Colombia chides Steve Harvey: You have to learn how to read

After making the flub that was seen around the world, comedian Steve Harvey finally had the chance to meet Miss Universe first runner-up Ariadna Gutierrez for the first time after wrongfully crowning her as Miss Universe 2015.

Last December, Harvey crowned Gutierrez as the winner, only to rectify his mistake minutes later and announced that it was Miss Philippines Pia Wurtzbach who won.

In the interview on “The Steve Harvey Show,” Gutierrez playfully chided Harvey and said that he should learn how to read.

“You have to learn how to read cards,” the Colombian beauty queen told Harvey before she burst out laughing.

“Because it was on the card. You wanted me to win, you know?” she added.

To which Harvey responded in jest: “Yes! I really wanted you to win! Yeah! I’m off the hook. I can leave it at that.”

On her part, the 22-year-old beauty queen said that she thought Harvey was just making a joke when he announced that he made a mistake on announcing the winner.

“If you can see the videos, you can see me laughing because I thought you were going to make a joke.

While the announcement mix-up has been a nightmare for her, Gutierrez said that she has since moved on from the incident.

“I already moved on. This is our destiny. That’s why were here,” she said.

During the interview, Harvey fought back tears when she apologized for what had happened.

“You’re the one person…you’re the one person that I really want to talk to because of the mistake I made. I cast you into a spotlight or place that I never intended to, that I would not want to happen to anybody. I just want to say how sorry I am. I’m beyond sorry for what happened that night, that it was you. Really at the end of the day, we walk away from here with something special,” the comedian said.

On Monday (Manila time), Harvey also got to talk to Wurtzbach, who said that everyone should move forward from the incident already.

“Don’t beat yourself up anymore. Let’s move forward and let’s be happy,” Wurtzbach told Harvey, who heaved a sigh of relief. AJH/IDL