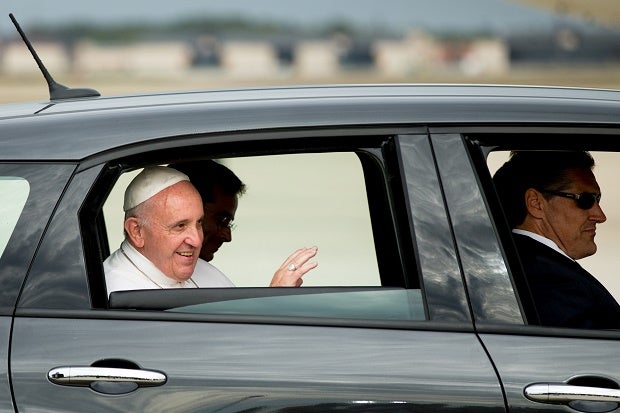 In this Sept. 22, 2015, file photo, Pope Francis waves from a Fiat 500L as his motorcade departs Andrews Air Force Base, Md. ,after being greeted by President Barack Obama and first lady Michelle Obama. One of the two Fiats used by Pope Francis during this visit to Philadelphia last year is going up for auction. The car will be up for bid as part of the Philadelphia Auto Show black tie gala on Jan. 29. Bids will be accepted in person and online. AP File Photo

NEW YORK, United States—It was the tiny car that whisked Pope Francis around Philadelphia and wowed Americans reared on gas-guzzling automobiles. Now it’s being offered for auction to lesser mortals with deep pockets.

At least one of two Fiat 500Ls, custom-made for the pope’s visit to Philadelphia and fitted with Secret Service license plates, goes on sale January 29, kicking off this year’s Philadelphia Auto Show.

READ: Who needs a limo? Pope Francis opts for a more modest Fiat

The second Fiat, which Catholic authorities said they may sell at the same auction, will go on display at the auto show, which runs from January 30 to February 7.

The Max Spann Real Estate and Auction Company has valued the car at $30,000 but declined Wednesday to estimate what price it might ultimately fetch.

Potential buyers can bid in person or online and the proceeds will benefit four charities run by the Archdiocese of Philadelphia.

“Being that it was used by the pope, there are intangibles. So it’s really hard to predict” what price it will fetch, he said.

Fiat Chrysler made two Fiat 500Ls for the pope’s use in Philadelphia and the US Secret Service provided the vehicle identification numbers, the archdiocese said. Fiat Chrysler donated the cars to the church, it added.

The pope also used models of the same vehicle in New York and Washington during his September 22-27 inaugural US tour, drawing massive crowds and delighting Americans with his humble manner.

“When we learned that these vehicles would be given to us, we wanted to find some way for the public to see them and answer Pope Francis’s call to love and care for the poor,” said Philadelphia Archbishop Charles Chaput.

Money raised by the sale of the car will go to charities run by the archdiocese that benefit the poor.

“The Fiat is such an icon of Pope Francis’s visit,” said Donna Crilley Farrell, executive director of the World Meeting of Families – Philadelphia 2015.

She said several Catholic charities would enjoy “simply incomparable” benefits as a result of the auction.

The archdioceses of New York and Washington said they also anticipated each taking possession of two Fiats made available for the pope in their cities, but had not decided what to do with the vehicles.

A spokesman for Fiat Chrysler Automobiles said the pope’s ride “greatly enhanced the Fiat brand’s image in the US” and coincided with the commercial launch of the 2016 Fiat 500X.

Fiat 500L sales were up 35 percent in December from the previous month, and Fiat recorded its best December sales ever, the spokesman told AFP.