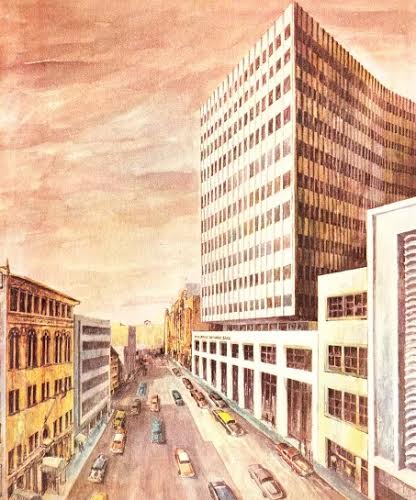 ARCHITECTS and other heritage experts have condemned the demolition of the iconic Philippine National Bank (PNB) building on Escolta, laughing off the claim of Manila Mayor Joseph Estrada that it had to be torn down since it was structurally unsound.

Architect Paulo Alcazaren said the building designed by the late Carlos Arguelles, one of the country’s most distinguished architects, was a great example of the mid-20th-century International Style architecture.

“The building is a robust structure, as most of those built in that era, and the fire last year is perceived by many as just an excuse for the demolition,” he said.

The architect and heritage advocate added he had not seen any report of the building’s condition by a structural engineer.

Alcazaren and former education and culture secretary and Intramuros Administation head Jaime Laya noted that, because of the demolition, the country would again lose another landmark heritage structure.

“The city, which owns the building and the lot, will probably sell it to the highest bidder; most probably a condo developer,” Alcazaren explained. “This company would then maximize the opportunity by building a tower much taller than the PNB.

“This will add yet another skyscraper in a district already unable to support such a high density [of tall buildings] because of inadequate transport, power, drainage and sewage-treatment infrastructure,” he added.

Laya, also a former governor of the Central Bank, said he regretted that Manila continued to lose “architectural masterpieces that give character to the city.”

He lamented that the historical or cultural value of sites was not often considered in zoning and building regulations despite the passage of the National Heritage Law of 2009, which states that structures that are at least 50 years old may be considered “important cultural properties” (ICP).

“The identification and full protection of select structures, plazas and parks, districts, sightlines, and other examples of built heritage would make Manila worthy of its proud nomenclature, Pearl of the Orient,” Laya explained.

Philippine Institute of Architects (PIA) president Joel Rico said the government should be blamed for the demolition because of its failure to put the PNB building on the list of ICPs needing national government protection despite its having been over 50 years old.

He said it was ironic Arguelles was himself a former president of PIA.

Rico added the building should have been restored 10 years ago, way before last year’s fire.

“Given the ideal circumstances, it should not have been demolished, but there may be compelling reasons for the demolition,” he said, citing the damage caused by the fire and the asbestos-made outer architectural elements.

“In fairness to Erap (Estrada), he considered public safety for the demolition,” he said.

However, Rico explained that structurally the building should have been retrofitted and adaptively reused rather than demolished.

He deplored the building was sacrificed due to the “lack of vision” of both the national and local governments.

He added Manila City Hall should be strongly blamed for the building’s fate since it abandoned the structure and did not allocate funds for its restoration.

Engineer Rannie Ison, former president of the Association of Structural Engineers of the Philippines, said that, from the legal standpoint, Manila had the prerogative to demolish the building because it was the owner.

Since 2000, Manila has been hounded by heritage conservation issues, starting with the demolition of the Jai Alai building, a beautiful prewar Streamline Moderne structure on Taft Avenue designed by Juan Arellano, upon orders by then Mayor Lito Atienza.

Other heritage controversies include the construction of the Park n’ Ride and Universidad de Manila buildings in Mehan Gardens; the tearing down of the Army-Navy Club on Roxas Boulevard; the demolition of the Art Deco Admiral Hotel and Michel Apartments in Malate; the uncertain fate of El Hogar building in Binondo.

Universidad de Manila was itself the old City College of Manila that used to occupy the PNB building on Escolta.

Since Estrada became mayor three years ago, more heritage issues have cropped up, such as the demolition of the old Meralco building on San Marcelino Street in Ermita, also designed by Arellano and with a giant relief by the Italian expatriate sculptor Francesco Monti; and, of course, the erection of the Torre de Manila that heritage advocates say destroy the skyline of the Rizal Monument in Luneta.