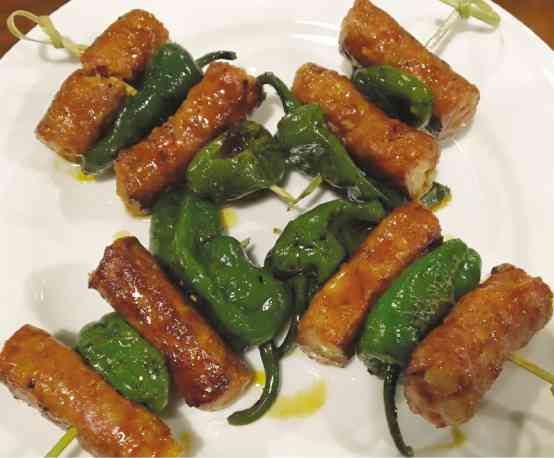 My kind of speakeasy–because it’s all about the food

But surely gourmet burgers started way back in 2014, and if there’s one thing that’s going to be big this year, it’s going to be all about street food. Third wave coffee is on the back burner and second-and-a-half wave is all in—all the punch and caffeine of third wave without the poncy pretentiousness and the hipster beards.

But Shake Shack and maybe 5 Guys and Chipotle are coming in, so 2016 is when the local fast food scene finally levels up.

It’s all too complicated. There are rumors swirling about, and vast sums of money being channeled in from other, less glamorous businesses; any food writer who thinks he or she can make a succinct prediction about this being the year of anything is talking out of their hat.

One swallow does not a summer make. Neither do two swallows, but by the third you can start talking about a trend.

I have been trying to play catchup with my knowledge of Spanish food lately, and Bar Pintxos is the latest establishment I’ve visited lately with a modern, sophisticated take on the little platters that are supposed to be had with alcohol.

What is the difference between pintxos and tapas? The correct answer is that it really depends on where you are in Spain, what kind of bar you’re in, and how loosely the establishment interprets the definition.

Pintxos, etymologically, should be pinched, with a skewer or toothpick, that is. The short answer is that in Manila the pintxos are smaller and cheaper and more likely to be side orders or appetizers, and the tapas are larger and more substantial.

But because San Sebastian and all things Basque are very trendy right now, most places will call themselves a pintxos bar rather than a tapas bar, even if they serve both.

Bar Pintxos is not easy to get to, and even harder to find. But don’t let that put you off, because it’s worth the trip. It is (don’t panic!) in the side streets of Muntinlupa, accessible by the service road of the South Expressway or through the bowels of the no-man’s land between Makati and Alabang.

There’s no sign for the establishment, so your landmark is that the building has a Pancake House on the ground floor. Hidden behind that is a small alleyway, and when you open the door you will find a clean, well-lighted space, unassuming interiors, and tables booked up with, as it turns out, just about every foodie in town.

It’s a food speakeasy. There’s no secret VIP room behind the main secret room, at least not that I know of, but this is my kind of speakeasy because it’s all about the food.

The acoustics are poor, the tables and chairs not the last word in comfort, but you know where they’ve put their attention. We were with a foodie couple with impeccable taste, so my wife and I just let them take the lead and order.

The first salvo of dishes that came out of the kitchen were amazing: I was especially taken by the skewer of padrón peppers and chistorra sausage, and the slice of bread topped with boquerones, uni and caviar.

We gamely started on a bottle of red wine but switched to beer when we tasted the house draft, which is one of the best ales I’ve ever had anywhere in the world (there is an entire chalkboard of other interesting ales and stouts if your tastes differ from mine).

This appeared just in time for the best dish of the evening, which was strips of pig’s ear, sliced into thin strips and then deep fried, served with aïoli and a bowl of chopped peppers to kick it into high gear.

For the latter half of the meal, we moved from pintxos territory firmly into larger tapas plates. By this time I had stopped taking notes, but I believe we had veal cheeks on mashed potatoes, a kind of slow-cooked embutido of beef, and the only dud of the evening, a non-so scintillating lamb paella that seemed to have been precooked and reheated.

The owners, Miguel Vecin and Martin Gonzalez, are the kind of restaurateurs foodies love to like: creative but unpretentious, passionate and uncompromising. It may not pass many people’s standards of being a “proper” restaurant; and the usual problem of not having a progression of starter and main dish in the Franco-Anglo tradition will prove to be a deal-breaker for some.

Purveyors of voluptuous drapes and silver cutlery need not apply. But the food really is very good, and those with adventurous palates and adventurous, er, navigational skills, should really head out here.

Coming home, with a belly full of good food and one’s mind massaged by alcohol, it seemed a very short drive away indeed.