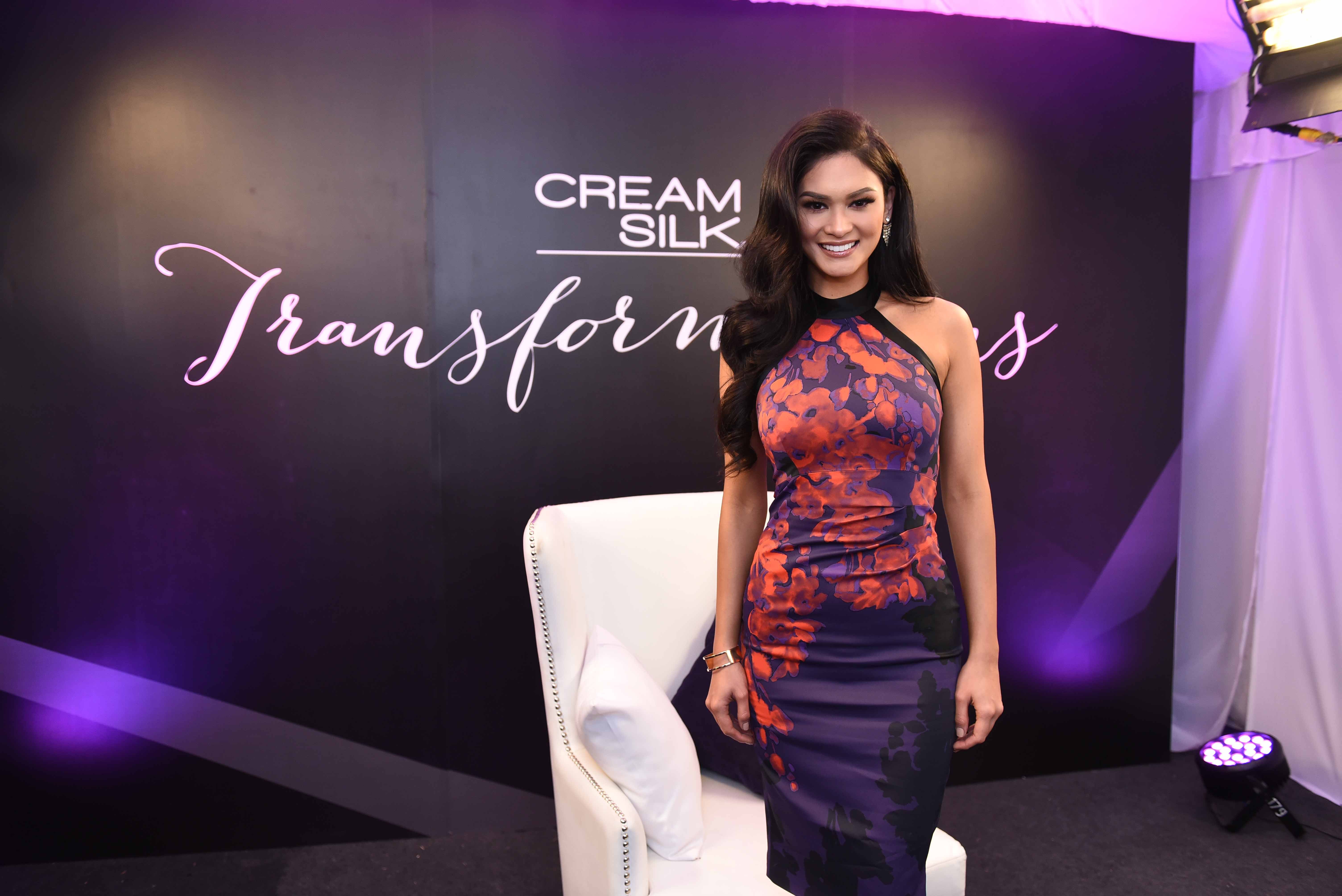 How to transform yourself, according to Pia–and also Nadine, Julie Anne, Rachelle Ann

Miss Universe 2015 Pia Alonzo Wurtzbach is today’s most inspirational millennial. She joined Binibining Pilipinas thrice before finally competing for Miss Universe and taking home the coveted crown, showing women around the world that grit and perseverance pay off.

As the glowing queen says, “If you have a dream, hold on to it. Do not give up on your dreams. All it takes is determination and discipline.”

And her message to the modern Filipino woman: “Transform from good to better, and better to best. Take on the universe!”

Wurtzbach recently graced the Creamsilk “Transformations” event at World Trade Center in Pasay City—her first appearance in Manila as Miss Universe. Looking stunning in a figure-hugging red-and-plum dress and big, wavy hair, she launched the Creamsilk campaign which aims to put the spotlight on the modern Filipino woman.

Creamsilk, a leading hair conditioner brand from Unilever, advocates Pinay fierceness. As Gina Lorenzana, Unilever vice president for personal care, says, “Women are embracing bigger and better roles, and the modern Filipino woman has evolved into a fearless and trailblazing individual determined to realize her dreams and make a positive mark in the world.”

Inquirer Lifestyle asked them about their biggest transformations.

Lustre is a prime-time TV sweetheart and half of the mega-popular JaDine tandem with partner James Reid. They appear in the drama series “On the Wings of Love”—Lustre as the bubbly and outspoken Leah, whose trademark motto is “Achieve!” It was surprising to know that Lustre used to be a shy kid.

“I was an introvert who played computer games all the time,” Nadine said. “I was home-schooled in high school and I didn’t even want to go to regular school.”

Her biggest transformation was accepting her flaws, which gave her the confidence to enter show biz. “I accepted myself, went full time into show biz after high school, and learned how to talk to people.”

Her tip to young girls like her: Work around your insecurities. “Girls always think about what’s wrong with them, that their skin or hair is not too nice, but really, acceptance is key. No one is perfect.”

Lustre aims to be a modern Filipino woman people can look up to, so she makes sure to watch her online attitude, which she considers “very crucial.”

“I don’t like people fighting on my accounts,” she said. “I’m protective of my fans. If I see a comment that I know will spark bad blood, I delete the message and block the poster.”

She also shows her followers (1.7 million on Instagram and 700,000 on Twitter) how to take care of themselves, especially their hair.

“My hair gets really dry from blow-drying, so I have it treated with Creamsilk at home,” she noted. “It is also important to clean your hair before you sleep if you’re putting products on it.”

“They will find reasons to ruin you, so I just focus on people who love and support me,” said San Jose, who transformed herself from a “teeny-bopper into a young lady.”

“I am innovating in terms of style, my fashion and my music,” she said. “I used to sing country pop, and now I’m into pop-R&B.”

San Jose explained that a modern Filipino woman is “confident, strong, beautiful inside and out, and able to inspire people by being fearless and unfazed by challenges, handling them with grace and poise.”

Her tip to keeping locks long and healthy: conditioner, good nutrition and hydration. “Eat fruits and don’t forget to drink lots of water.”

Rachelle Ann Go, the theater actress who transformed herself from the Little Mermaid to Kim (“Miss Saigon”) and now Fantine (“Les Misérables”), said: “‘Little Mermaid’ was my first musical; I didn’t even want to do it because I didn’t have the background and training, and the costume was just a bra!” she exclaimed. “But I went on and did ‘Tarzan,’ then ‘Miss Saigon,’ and ‘Les Misérables’ in London.”

She said working and living on her own in London was her ultimate transformation: “It was my first time to live alone in a new place, without my family and friends. I didn’t know how to cook. I did all the chores. I took care of myself when I got sick.”

London was a lesson in independence for Go. She didn’t have a manager, and talked to agents and producers herself. She did eight shows a week, and didn’t really party, unlike her castmates who would unwind every night. Even now, she’d rather stay home to rest and clean up.

“I also do my own makeup. I am the only Fantine with false eyelashes!” she said, laughing. “Sometimes I get called out for it, but I have to make my eyes look bigger because Fantine’s daughter, Cosette, has bright, wide eyes, and we have to look the same.”

Go said she takes Creamsilk Standout Straight with her to London to keep her hair healthy, since it’s formulated for Asian hair.

For Coleen Garcia, transformation happens every time she’s in front of the camera. She also considers herself a modern Filipino woman, “someone independent and strong-willed. She doesn’t let anybody dictate to her and she doesn’t step on other people’s toes, too.”

And for millennials who have yet to undergo their best transformation, Yassi Pressman said it’s nothing to worry about: “I know a lot of extremely intelligent and amazing people who are not as fierce or as loud as I am.”

Pressman started as a commercial model but eventually ventured into singing, acting and hosting. She said she was a “bibo” kid who joined mall kiddie contests—and won. But she also had awkward moments as a teen.

“Show biz forced me to be confident. Focus on your strength, because everyone has an edge,” she noted. “You don’t have to be the most confident or the best dressed to transform yourself.”