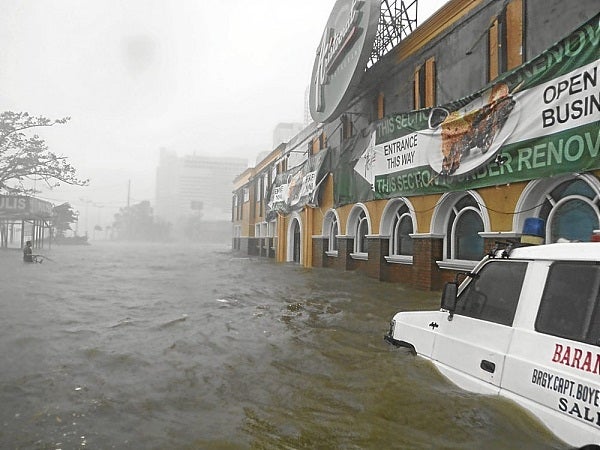 How people saved their beloved Aristocrat 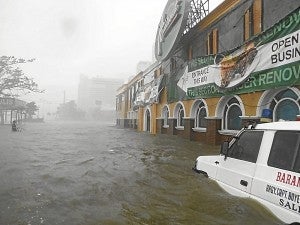 It was Security Commander Balambao’s day-off  when Typhoon “Pedring” hit Manila last Sept. 27, but an early morning call from one of his men prompted him to report for duty.

He braved the uncovered manholes of Malate, floating debris, strong winds and flood currents from the Manila Bay area to get to his destination: The Aristocrat Restaurant.

What greeted him was not the familiar sunny bayside restaurant, but a structure in waist-deep floodwater being battered by strong winds and enormous waves, some as high as the coconut trees lining the Roxas Boulevard.

His was just one of the countless stories of employees on the first time that Aristocrat was submerged in water in its 75-year history.

The restaurant’s dining areas were filled with saltwater, dirt and debris, and by 7 a.m., water had reached the kitchen area.

The whole restaurant was a mess, and employees could only look as their beloved Aristocrat was being inundated by two feet of floodwater. 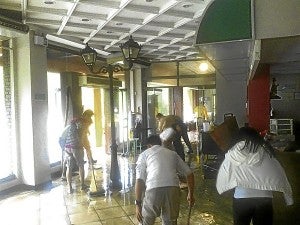 Paul Reyes, a member of the Reyes clan, recalled how shocked and saddened he was, and how he cried in despair upon seeing his family’s legacy literally sinking. Amid the confusion and loss, the Aristocrat family, headed by this writer (the Aristocrat president), turned to a power far greater than the typhoon; the power of faith in God.

The prayers were answered as soon as they were said, as the water started to recede by 12 noon and, finally, employees could start the cleanup.

Sylvia Reyes, another family member, joined in the effort to get the restaurant ready for operations at the soonest possible time—a zeal imparted by the late founder, Lola Asiang, who believed that Aristocrat Restaurant should always be there for the customers. 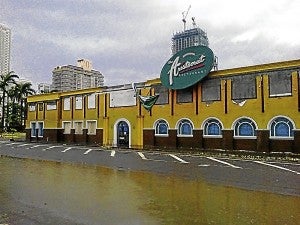 A sense of solidarity could be felt during the cleanup as employees, regardless of their position and department, pitched in to get the restaurant running again.

Against all odds and even if it was the most affected restaurant in the area, by 6:30 p.m., Aristocrat opened its doors, serving tired, wet and weary customers—a remarkable feat  not duplicated by other establishments in the area, and a true testament to the resiliency of the Filipino spirit.

The employees are regarded as members of the extended Reyes family, and each one showed faith, loyalty, love, devotion and dedication to the company in the face of disaster—something you can’t put a price on.

Sylvia Reyes shared this message after the typhoon:

“Upon arriving at Aristocrat yesterday at around 9:30 a.m. on my dad’s ever-reliable monster of a Safari, I witnessed what I thought was impossible. Aristocrat was surrounded by water. From our receiving area, to the kitchen, to the dining areas, water was everywhere. 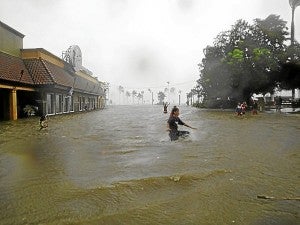 “I was greeted by our people, some of whom were stranded and had been there since the night shift, while the others braved the long walk in waist-deep, dirty salt water from Harrison Plaza or TM Kalaw.

“Seeing the waves hit the seawall, some higher than the coconut trees, made me feel like I was watching National Geographic—only I was in the middle of it all. There was no shoreline anymore to speak of. It’s as if we were in the middle of the ocean.  Growing up at Aristocrat never did I ever experience nor imagine such to happen. I was a witness to God’s manifestation of His power.

“But what made me feel His presence more was the presence of all those around me, the people who gave me hope and determination that we could make it and put things back in order. By 6:30 p.m., Aristocrat opened its doors once again to serve the hungry. With the strong love and devotion of our Aristocrat family, we worked together as one—as ONE ARISTOCRAT!

“This to me was the essence of what 75 years of Aristocrat is all about—people. Once again, we made history.”