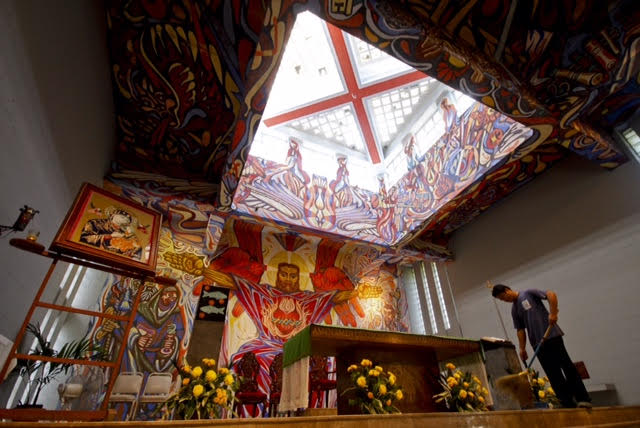 IN 1950, Philippine-born artist and dilettante Alfonso Ossorio returned to the Philippines and stayed for 10 months in the family sugar estate in Victorias, Negros Occidental, where he designed and executed a mural for the parish church that his family had built for its workers. Dedicated to Saint Joseph the Worker, the church itself was to a large extent the brainchild and handiwork of Ossorio, since he had advised the family the commissioning of international designers to erect the largely modern structure—the Raymond and Radon as principal architect, and Ade Bethune as interior decorator—and furnish it with unorthodox but very striking liturgical art.

But perhaps the most unorthodox and striking of the liturgical furnishing is Ossorio’s work himself—a portrayal of a fiery Christ that led Life Magazine to call the church “The Chapel of the Angry Christ.”

It is quite strange now how the mural has been christened such, since it is a depiction actually of the Holy Trinity, the Catholic dogma of the three-personhood of the one God. Painting on the flat wall and the apse, Ossorio used ethyl silicate as a painting medium (a difficult medium, it now turns out) and painted God the Father offering his son for the salvation of humanity. Meanwhile, God the Son occupies the central place in the altar and opens his arms to reveal his fiery heart, offering God the Holy Spirit, represented as a white dove, to the world.

The tableau basically offers Ossorio’s vision of the Last Judgment with the Holy Spirit and an army of angels dawning on the world in critical transition. All over balls of fire brim and issue like projectiles. Perhaps Ossorio caught the mood of the Cold-War world of his time—on the edge of its seat over the prospect of an atomic war between the United States and the Soviet Union—so that the Second Coming becomes the Apocalypse; hence a magazine ironically named Life gave it the grim, determined and deadly title of “The Angry Christ.”

Ossorio was never to return to the subject (perhaps)—and to the Philippines. We know that he later became a supporter and collaborator of Jackson Pollock and a pioneering figure of abstract expressionism. Heir to vast sugar holdings, British- and Harvard-educated, Osorio (born 1916) held court at his estate in the Hamptons and became something of a cultural (and because of a famous arboretum he put up, horticultural) impresario. Advised by Pollock to check out Jean Dubuffet in Paris, Ossorio did so, and his art shifted from abstract expressionism to something of the Art Brut for which Dubuffet was known. Curiously enough, Pollock and Dubuffet never met, but they found a bridge in Ossorio—the West meeting the West through the East, if there was one.

Ossorio died of a stroke in 1990, and his passing was noted by an obituary in the New York Times that called him “an artist and art patron who created an internationally known arboretum and sculpture garden.” There was mention of his paintings and drawings, which were linked to the “New York School” and Dubuffet’s.

Ossorio is now best known for his “assemblages,” works made from what he called “congregations” of objects found in nature and industry.

But an auction in the first decade of the 21st century might have renewed interest in Ossorio. The sale of Pollock’s painting, “No. 5, 1948,” for $140 million generated quite frantic buzz. The provenance of the painting: the Ossorio collection.

In 2013, the Phillips Collection in Washington and Parrish Art Museum in New York mounted an important exhibit of the meeting between the abstract expressionist movements of the New York School and the Art Brut in Paris, thereby focusing on the unique interaction between Pollock and Dubuffet in the life and art of Ossorio.

The title of the exhibit—“Angels, Demons, and Savages: Pollock, Ossorio, Dubuffet”—made Ossorio the pivot and of central importance in the meeting of two movements that were radically alike but also radically different in many ways. Critics said it was “surprising” to find how Ossorio occupied such an important place in the meeting of two great artists, which however did not take away from his own importance as an artist.

“The show finds some striking affinities between [Ossorio’s works of representation and repetition] and   Pollock’s ‘Black Pourings,’ a perplexing group of black-and-white screen prints and related drawings in which Pollock uses reproduction and repetition to undermine his signature ‘action-painting,’” the New York Times reported.

“The persistence of the figure, even in late works by Pollock, is another of the exhibition’s surprises. It suggests that Ossorio, who never had a problem reconciling abstraction and representation, exerted his own influence on Pollock. As Dubuffet observed: ‘In Ossorio’s eyes, the embodiment of things seems fortuitous, as inessential as the fact, for example, that a gas may assume a liquid state. Each body seems to him as a spirit occasionally passing into a field where human eyes can perceive it.’”

Now, Filipinos will be able to view for themselves representative pieces of Ossorio’s life-work without going to Victorias in Negros. To mark the 100th birth anniversary of Alfonso Angel Ossorio, León Gallery will mount the exhibit “Afflictions of Glory: A Representative Selection of His Work,” starting Feb. 5. It is the first-ever exhibit of Ossorio in the Philippines.

The exhibit is timely since it comes on the heels of the declaration by the National Museum of the Victorias church as “Important Cultural Property,” under the National Heritage Law. This means that, as the 2009 law says, the Negros Occidental church has “exceptional, artistic and historical significance.” This also means that it will be provided state protection and funding for its conservation.

To be included in the exhibit is “Study of Sanctuary Mural,” Ossorio’s study for his mural for the chapel in Victorias, done in encaustic and ink on paper, perhaps the missing link for art scholars trying to delve into the mystery of the making of the fiery mural in Negros Occidental.

The exhibit is being mounted by Jaime Ponce de León of León Gallery. A collaborator of the exhibit is Lilian Rejante Manahan, who wrote perhaps the most extensive summing-up in the Philippines of Ossorio life and work in the 2014 “Power Issue” of Rogue magazine (rogue.ph/the-king-of-the-creeks/). She’s also helping restore and conserve Ossorio’s mural and the Victorias chapel. With Lisa Guerrero Nakpil, she’s curating the important exhibit.

“The provenance is from someone very close to Alfonso Ossorio,” said Jaime Ponce de León.

“Alfonso Ossorio was a class all his own,” the León owner explained. “He started as a Surrealist before absorbing the spontaneity and experimental materials of Abstract Expressionism. Still, he may not be strictly classified as an Ab-Ex artist because of his obvious draughtsmanship. In his body of work, there is still a marked elegance and control and even a personal narrative.”

Ossorio for both Filipinos and Americans is a conundrum. Ponce de León would rather situate him in the modern art movement of the West.

“Ossorio was never really grounded in the Philippines, since he left [the country] as a child,” the León owner said. “Perhaps the Filipino nuances in his work are purely learned ones devoid of firsthand experience. The few works he had that used Philippine imagery were only as decorative elements, never anything experiential or personal. What is important to ask is what would be his role in American/International art history.”

“I think the Whitney Museum grounded him very specifically in their recent inaugural exhibit,” said Nakpil. “He is included in the segment of American art entitled ‘New York 1955,’ which refers to the extraordinary rise of abstract expressionism in the 1950s, and which moved the center of gravity from Europe to the United States for the very first time.”

“So Ossorio was a significant artist in a very specific and significant time for American art,” Nakpil added. “Ossorio, however, remained relevant after Ab-Eex was superseded by other movements. He continued to exhibit major works well into the 1980s.”

Manahan noted the searing spirituality of the art of Ossorio, evident not only in his Victorias chapel mural but also in his other works. To critics, this was borne out of Ossorio’s conflicted personality as having come from a very devout Catholic background and his homosexuality.

But Mahanan likewise mentioned Ossorio’s conflicted personality as a result of having a very strong mother; and asked whether Ossorio was influenced by the baroque Catholicism of the Philippines and psychological complexes, Manahan replied, “Freudian more than anything else.”

“Ossorio’s brand of spirituality, while deeply devout and learned, is in fact the source of his conflict, as his art is, in turn, fueled by this conflict,” Manahan explained.

And while Kandinsky wrote about “spirituality in art,” his conception was different from Ossorio’s.

“Herein lies the difference between Kandinsky and Ossorio,” she explained, “where Kandinsky references theosophical theory expressed in geometric concentrics, Ossorio’s spirituality is of an emotional and extremely personal variety.”

But whatever the “spiritual” sources of his art, Ossorio obviously has a pivotal role in the history of modern art.

“Ossorio, I think, has a place all his own in modern art,” said Manahan. “His techniques cross through surrealism, abstract expressionism with incredible draftsmanship.”