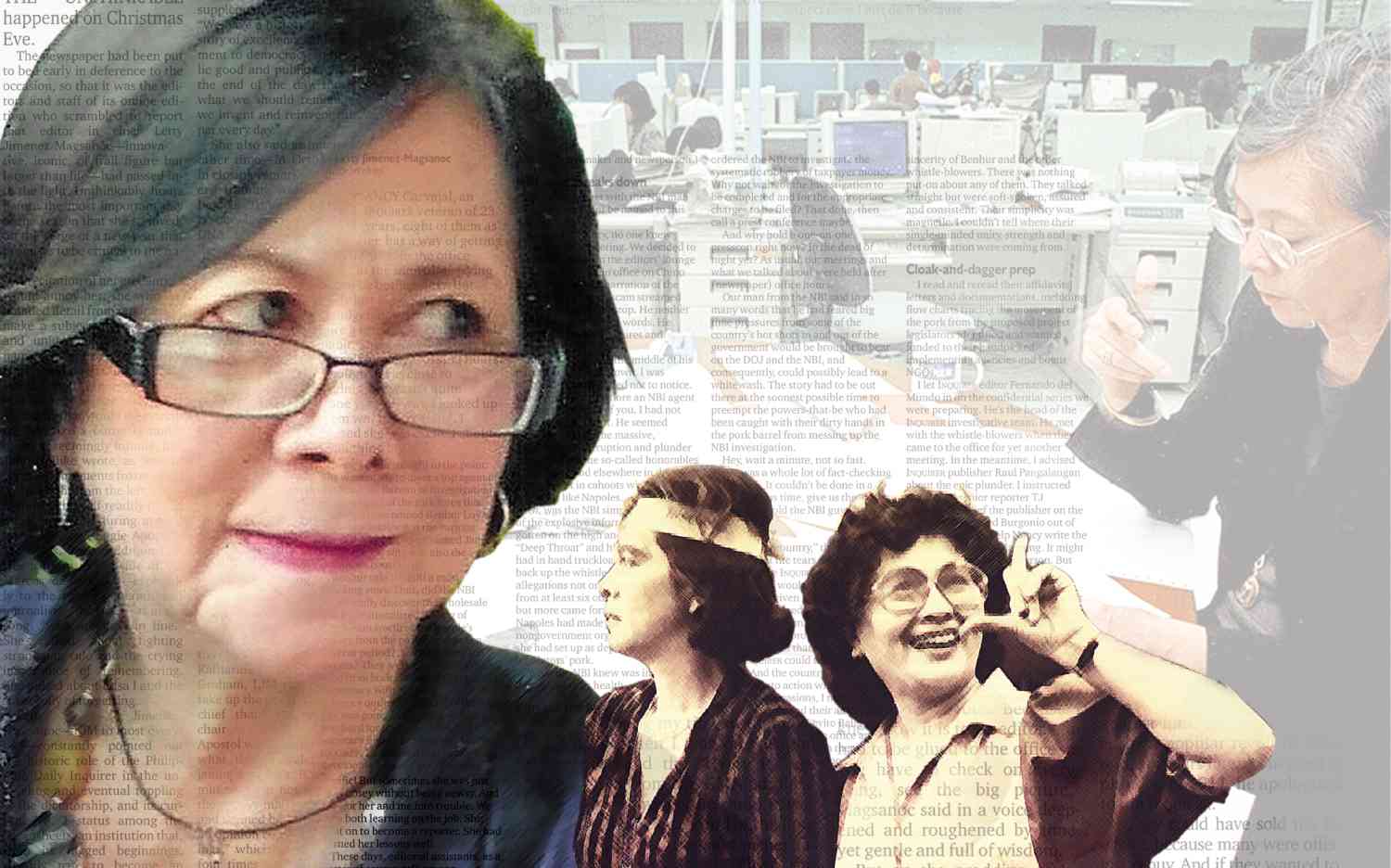 ‘The Filipino of the Year is not only for her and her memory, not only for the vigilant journalist, but also for every freedom-loving Filipino’

Letty Jimenez-Magsanoc: Keeping the faith in her country

Letty Jimenez-Magsanoc is the Inquirer’s 2015 Filipino of the Year, chosen in a poll conducted by the Inquirer among more than 50 editors from across its multimedia platforms.

The Filipino of the Year is an informal vote, cast in numbered sheets, held at the end of each year.

The selection of Magsanoc as the 2015 Filipino of the Year is an unprecedented move for the Inquirer that she herself would have vehemently opposed—had she lived.

However, her sudden death of heart attack last Christmas Eve gave her colleagues and peers the compelling opportunity to give her life, her work— indeed her sense of duty to country— the recognition she had tried to evade all her life. “We cover the news, we are not the news” had been her mantra to us.

In truth, Magsanoc was the news as much as the news she had covered or whose coverage she directed, only that nobody dared report on her or ferret her out of the foxhole, except for the predictable libel cases.

Through the tumult of recent Philippine history, she was an underlying force in the historic twists and turns, whose decisions and judgment calls helped turn the tide.

For instance, there wouldn’t have been a Janet Lim-Napoles —an antagonist in the country’s inconclusive fight against corruption—without a Magsanoc who patiently, assiduously and wisely guided the reporters in the drawn-out coverage, and in some instances, crafting the story herself.

It was her brave decision and direction of the news that gave birth to this investigative report series, which, in time, put some powers-that-be behind bars, and stopped the institutionalized abuse of the pork-barrel fund.

To set the news agenda was, and still is, the mission of the Inquirer which she lived by. And through it all, Magsanoc kept the faith—in the Inquirer as a media institution, in her profession, and more important, in her country.

By naming her 2015 Filipino of the Year, her colleagues in the Inquirer concede the fact that more than being their esteemed editor in chief and a journalist, Magsanoc was a courageous Filipino who chose to help make a difference in Philippine society.

It is our way of sharing a brave and nationalistic Filipino woman with the rest of the country, much of which perhaps didn’t even know her name.

We do this so that her story may live on to inspire our children and our grandchildren.

We do this so that the future generations of Filipinos will not forget that a great part of the freedom they enjoy, indeed part of the continuing struggle to right what is wrong, has been due, in no insignificant manner, to the quiet efforts of this woman.

Hers is a narrative that helped define recent Philippine history, from the Marcos dictatorship to the Aquino administration that anchored itself on “daang matuwid” (straight path).

In a tribute given by the Inquirer during her wake at Heritage Memorial Park last Dec. 28, the Inquirer chair announced the creation of a Letty Jimenez-Magsanoc Journalism Award in honor of its editor in chief.

Educated in an exclusive girls’ school and later in a university in the United States, born to a relatively prominent family, Magsanoc had a choice —to be a stay-at-home wife and mother, and to continue to lead a relatively comfortable and sheltered life, or to continue her passion as a journalist. (She actually didn’t need a job.)

In fact, she pursued both passions—for family, and for her profession—and nurtured lives in both worlds.

Successful and prominent as a journalist, she could have actually just rested on her laurels. She did not, but instead continued to test the limits of press freedom (vis-à-vis not only the government but also advertisers) in trying to right what was wrong in the country.

At the end of the day, it was love of country—the values the Filipino held dear—not only journalism, that fueled her: “… she did it as natural as breathing” was how her daughter Kara Magsanoc-Alikpala described her mother’s work and passion, in thanking the Senate on Jan. 18, after it passed resolutions paying tribute to Magsanoc’s contribution to journalism and the country.

In their nomination, the editors explained their choice of Magsanoc: “With quiet fortitude, LJM (as she was called in the office) had helped shape the country’s destiny, from the Marcos regime, the Edsa People Power Revolution, the corruption-plagued Estrada and Macapagal-Arroyo administrations to the anticorruption thrust of the Aquino administration. While she had fought for press freedom and a free and democratic Philippines, and lived the values dear to the Filipino, her work, indeed her life, had gone unheralded, which was how she wanted it. Her death, however, has compelled us to make people aware of her legacy, so that future generations may know, learn and be inspired by it.

“The Filipino of the Year nomination is not only for her and her memory, not only for the vigilant journalist, but also for every freedom-loving Filipino.”

The narrative that is Magsanoc took an exciting turn when Eugenia Duran-Apostol, or “Tita Eggie” to the generation of journalists she has nurtured, zeroed in on the Panorama magazine editor who had been fired.

This was in 1983. By then, Apostol had evolved from being a weekly women’s magazine editor who was known for issues that sold like hotcakes (her Woman’s Home Companion was known for scoops on the cover, such as an abs-baring Muhammad Ali with only a towel covering him from waist down) to a feisty editor testing the limits of censorship in the Marcos era.

Apostol had an editor’s killer instinct unparalleled in those years (witnessed by this writer who was her editorial assistant), unmatched except perhaps by that of the newly terminated Panorama editor.

Apostol was not only after telling the story that was being left untold by the controlled press, she also was in the pursuit of truth behind the assassination of Benigno Aquino Jr.

In a story she wrote in the Inquirer (“Present at creation: Hysterical, historical,” Nov. 22, 2010), the newspaper’s founding chair recalled the mammoth Ninoy Aquino funeral that was barely reported in the newspapers: “…This made me mad—and, gathering the Mr. & Ms. staff, I announced a special funeral issue the very next day… And the demonstrations continued. How to document all these? I ran to the house of Letty Jimenez-Magsanoc who was jobless since Hans Menzi fired her from the Bulletin because of an unsympathetic (to Marcos) story she wrote in Philippine Panorama two years earlier.

“I asked her to edit a Mr. & Ms. Special Edition to record the daily demonstrations. (‘But you can’t use my name,’ she admonished, or we ran the risk of being closed down.)

Thus began the partnership of two editors that would give birth to the Philippine Daily Inquirer (the name coined by Magsanoc) and would usher in an exciting era in Philippine journalism marked by fearless reporting, where the press, propelled by its newly won freedom, would help shape the country’s destiny, as much as the government, elected by the people, did.

The Apostol-Magsanoc partnership heralded the years of writing dangerously.

In 2006, Time magazine named them among Asia’s heroes of the past six decades, with former President Corazon Aquino and pool champion Efren “Bata” Reyes.

Putting the two editors in a section called “Inspirations” alongside the Dalai Lama of Tibet and Mother Teresa, Time wrote: “The Philippine press was terrified of covering a dictator’s regime—until this duo came along…”

The early years of Inquirer were as exciting, if not controversial, as the news it covered, with changes in ownership, and Apostol leaving the Inquirer ostensibly to prevent some of its shares from falling in the hands of other vested interests.

Through it all, Magsanoc continued the covenant of press freedom she had with Apostol, but this time with the mother-daughter team of Marixi Rufino-Prieto and Sandy Prieto-Romualdez strengthening the pact even more, the former as Inquirer chair and the latter as president and chief executive officer.

In 1999, in the call for advertisers’ boycott made by the beleaguered President Joseph Estrada, this covenant was put to the test. The Inquirer didn’t blink.

“The editorial group stuck to its guns,” Magsanoc wrote in the foreword of the coffee table book, “The Inquirer Story: 30 Years of Shaping History,” released in December last year.

“…MRP (Marixi Rufino-Prieto) backed the editorial team. (Behind her back, business associates said she was insane.) Her business (and not just the Inquirer) was hemorrhaging yet she was saying stuff like, ‘One of the core values we give at the Inquirer is trust. We trust the editorial group is performing its job professionally, so we leave them alone to do their job.’”

Magsanoc continued: “SPR (Sandy Prieto-Romualdez), as usual, expressed her ‘unwavering support for editorial,’ which springs from knowing that the editors had no hidden agenda…”

That was Magsanoc’s narrative of that tumultuous time. She wrote this foreword last November, when she hurried back to the office from the Asia-Pacific Economic Cooperation welcome reception dinner. It would be her last piece.

Many times, Magsanoc would put in context the editorial independence the Inquirer had become known for, and that was in the context of having owners and management that respected editorial independence. Her relationship with SPR had been likened to the dynamic of a marriage— with its ups and downs—each one knowing and sticking to her role, while respecting the other’s mandate. Come to think of it, that’s the formula of a lasting marriage.

Through the decades, Magsanoc stuck to her mission to use her profession to improve the lot of her fellowmen.

Nowhere was this more evident in the last two years than in the investigative series on the pork barrel scam in 2013. In her article, “How ‘the pork’ was lost” (Dec. 9, 2013), Magsanoc concluded:

“We had the documents, the testimonies, the wide-eyed sincerity, the sacrifices, the constancy of the whistle-blowers and that of their lawyer [Levito] Baligod, the relentless work of the Inquirerstaff and the scrutinous probing of the NBI (National Bureau of Investigation) and its incredible tenacity under the direction of the DOJ (Department of Justice). We had the respect and trust of Sandy. And there were, too, my gut feel and instincts that cried, ‘Go OMG!’

“Best of all, I prayed for guidance.”

Whenever Magsanoc prayed, it was apparent, she was invincible.

In naming her Filipino of the Year, we honor not only a year’s accomplishments, but the lifetime mission of this multiawarded journalist.

In egging us on to do our best, to push ourselves to the limits, Magsanoc would always tell us, “Surprise me! I love surprises.”

A showy salute to Letty Jimenez-Magsanoc that night