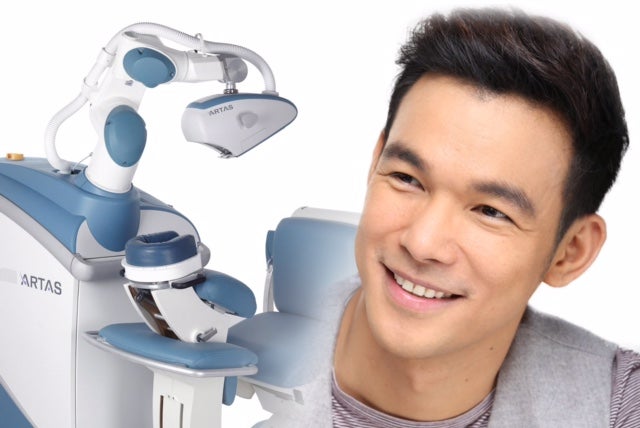 At 32, actor-singer-theater artist Mark Bautista has dodged every grown man’s greatest fear—or more precisely, he has kept balding at bay before any of his fans could notice.

Frequent hair fall was his warning sign. “I decided to do something about it,” he said. “I went to see Dr. Aivee Teo and the clinic’s hair specialist, Dr. Third Crisanto, to have a consultation.”

Since he was advised that prevention was better than cure, Bautista decided to try Artas Hair Robotics, the Aivee Group’s speedy answer to the hairline’s vanishing act.

Unlike the traditional method, the procedure—dubbed a robotic revolution—has minimal risk and no pain involved.

People have an irrational fear of injury from the hands of surgeons, but Artas’ image-guided robotic system should be cause for reassurance; it does the operation in a safer and more precise, reliable way.

During the process called follicular unit extraction (FUE), donor hair is extracted from the back and sides of the scalp using robotic control; the extracts are then implanted into the balding spots.

Treatment delivers permanent results with the least signs of wounding.

As Mark Bautista recalled, “I was just texting the entire time.”

In case the patient is anxious of the outcome, Artas software would create a 3D digitized model of his head, showing how the results would appear once he’d gone through the operation.

“Appearance is essential especially for people who work in front of the camera,” said Bautista. “People look at you for at least a few minutes on TV with close-ups and you want to present yourself in a pleasant way.”

“I think, more than anything, it’s the confidence that this treatment gives you,” Bautista said. “It’s for everyone who thinks that hair is their crowning glory.”