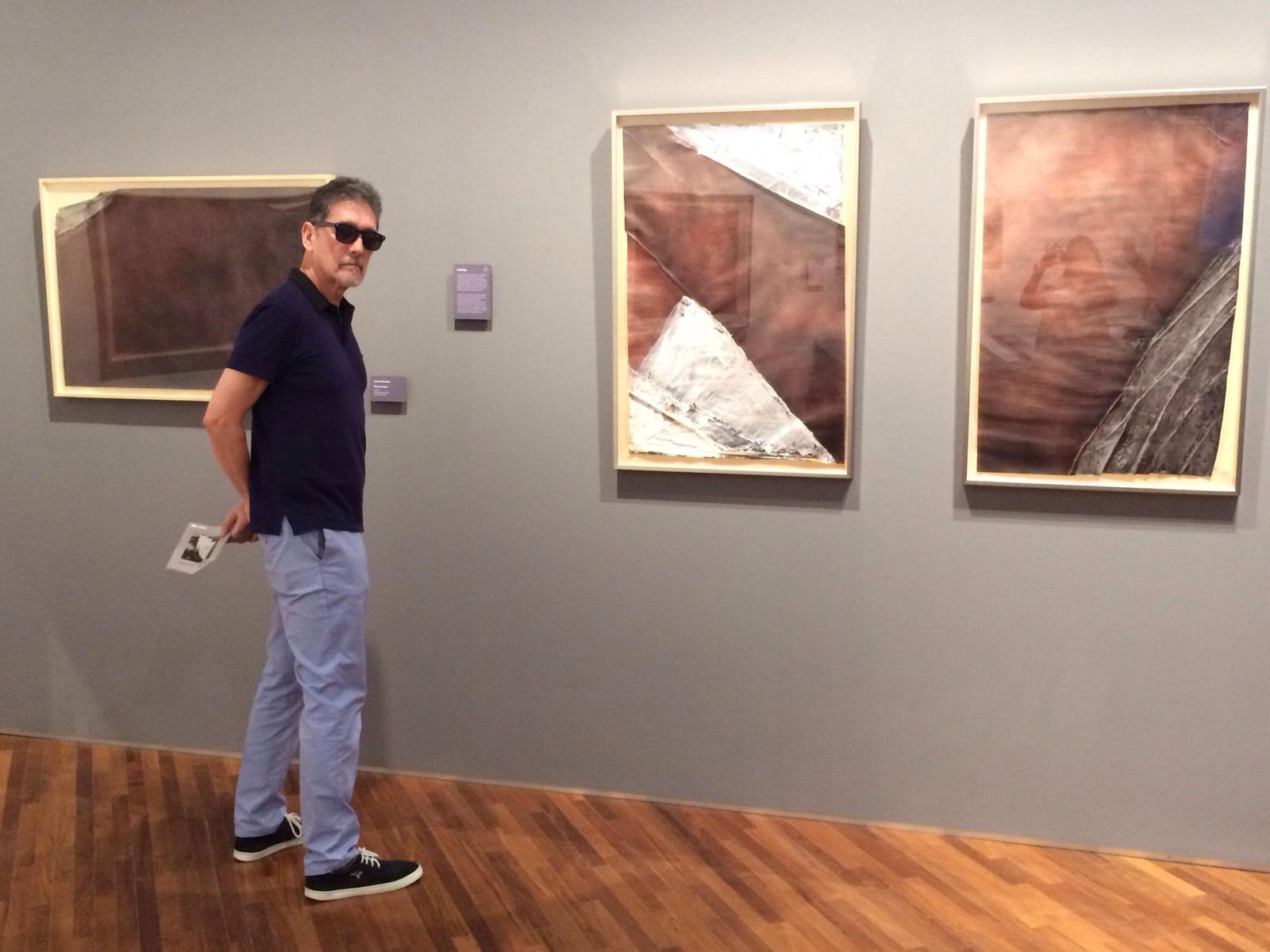 Primarily known for his pioneering and enduring contribution to Philippine television, Johnny Manahan, it turns out, is a pioneering visual-conceptual-video artist as well, one of the first in Asia.

In fact, he was one of the early recipients of the Thirteen Artists awards from the Cultural Center of the Philippines (CCP), and was among our five representatives to the Paris Art Biennale in 1982.

With him in the Thirteen Artists batch were Ray Albano, then director of the CCP art gallery; Nonon Padilla, who later pioneered theater productions at CCP; Dindo Angeles; and installation artist Junyee.

It was at the Paris Biennale where Manahan’s conceptual video work was given an honorable mention, the only Filipino to have been given this citation.

Manahan was also known for his large canvases, some measuring 12 ft x 6 ft, some of them unshaped. Although he had a number of exhibits between early ’70s -’80s, no list of buyers exits.

The only known canvases were those that hung at Makati Medical Center, of which Manahan’s father, prominent obstetrician Dr. Constantino Manahan, was cofounder and medical director until his passing in 1988.

The Singapore exhibit, “The Fact Has No Appearance: Beyond the Object,” features Manahan with two other Asian artists, Redza Piyadasa of Malaysia (deceased), and Tan Teng Kee, from Malaysia and Singapore.

The exhibit ” looks at the impact of new ideas on art in Southeast Asia during the 1970s through the case studies of these three artists,” as explained by the wall caption at the entrance of Concourse.

Most of Manahan’s conceptual photographic works were “resurrected” mostly from the family archives, including the original award-winning Umatic video tape sent to Paris in 1982. Surprisingly the video tape, shot in what was then considered broadcast quality, did not sustain damage typical of most recordings in this format owing to the airtight case in which it was stored.

Five works on paper from an exhibition in the ’80s were faithfully archived by Manahan’s brother, José Armando Eduque, and were loaned by Eduque for this exhibit. The photographs were diligently restored in Singapore, aided by Manila-based paper and photograph restorer Alexandra Botelho.

The collection include an invitation to Manahan’s first exhibit, a witty comic strip illustrated by Manny Soriano, then working at the first Design Center, with dialogue written by playwright Paul Dumol (“Paglilitis ni Mang Serapio”).

One of Manahan’s works highlights the wit and deadpan humor in his thought process, in a series of blank frames with sprockets, titled “Self-Portrait with Lens Cap On.”

Originally consisting of two series, one of 24 shots, the other 36 shots, the work delineates a particular time and place. Because of the changes in modern technology, the concept renders itself undoubtedly undoable. To this is added another concept, which at that time was not even considered.

The nature of Conceptual Art is transitory, it is based on the concept that art may exist solely as an idea and not in the physical realm. For conceptual artists the idea of an artwork matters more than its physical identity.

And because of the transient element of a concept-of-the-moment, many works of this nature are lost.

Documentation plays a vital role in preserving the idea-work. Photographs and notes on the preparation of Manahan’s “Blowing Smoke Under a Plastic Bag” or even Ray Albano’s Tokyo Biennale’s “Step on the Sand and Make Footprints,” are all of what is left. They were meant to be experienced and not collected as finished products. It about the message and not the messenger.

Because the exhibit was an event that was part of Singapore’s Art Stage, Manila-based gallery owners were present at the opening such as Evita Sarenas of Finale Art File, who at the time Manahan was active, exhibited some of his works; Silvana Ancelotti Diaz of Galleria Duemila, who also had known Manahan then; and Zaballero, who was among the artists of that period.

Isa Lorenzo and Rachel Rillo of Silverlens as they belonged to the younger generations and had not seen Manahan’s work, were enthusiastic about the exhibit and pronounced it “the real thing.”

They said Manahan paved the way for installation, digital, performance art, and, generally, art that could be experienced.