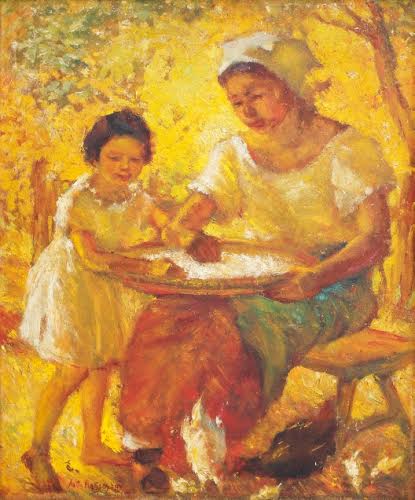 VINTAGE paintings, antiques, historical documents, sculptures, stylish furniture and other objets d’art will be up for grabs at the forthcoming art auction of León Gallery in Makati City, an annual event to raise funds for the Fellows of the Asian Art Council (AAC) Philippines.

This was announced at a recent press conference at Milky Way Restaurant in Makati. Among those present were Jaime L. Ponce de León of León Gallery and Malu A. Gamboa of ACC.

It is presumed that Manila’s art collectors will be awaiting the event with bated breath. Some of them are publicity shy, prefer to remain anonymous and just send representatives to bid for them.

Over 200 items will be up for bidding, including rare paintings, sculptures, antiques, santo, maps, photographs, furniture and historical documents. The latter include a letter from Leonora Lansing, a “lover” of Rizal, to his brother Paciano; a book dedicated by Juan Luna to his brother Antonio, the now famous “Heneral Luna”; and a rare copy of the so-called third novel by Rizal (“Makamisa”).

There are works by National Artist Ben Cabrera (BenCab), Roberto Chabet, Elmer Borlongan and Manny Garibay. Other vintage paintings include a portrait of the Araneta matriarch (Doña Carmen) by Vicente Manansala; and works by Anita Magsaysay-Ho (mother and child), National Artist Arturo Luz (circa 1950s); and a “very large” painting by Lee Aguinaldo. There’s a 14th-century bolo (bladed weapon).

There are now over 300 fellows, including national artists, who have received grants for cultural exchange programs in the United States and Asia. “We have to continue this tradition,” said Gamboa.

Auction will be on Feb 20, 2 p.m. Access catalogue at www.leon.gallery.com.

‘THE SUMMON of Emperor Fragile with the Green Yuki Girls,’ by Luis Lorenzana (b.1979)