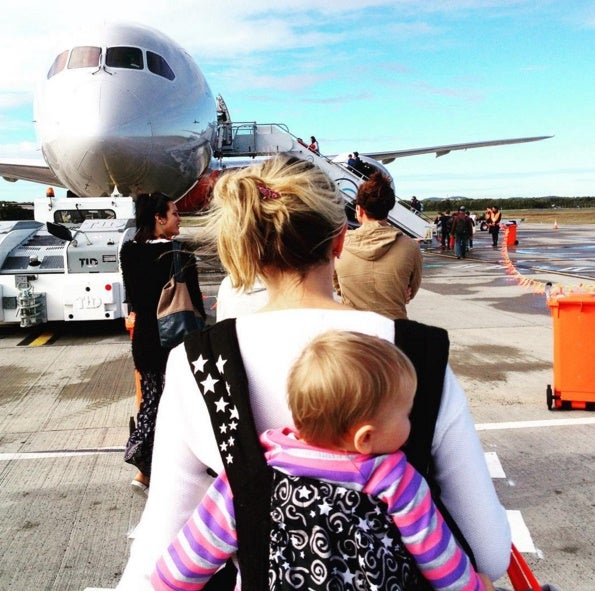 Most new mothers spend their maternity leave recuperating, but Karen Edwards is not your ordinary stay-at-home-mom.

After their baby daughter Esme was born in late 2014, Edwards and her partner Shaun Bayes – both avid backpackers – sold their car, put up their house in London for rent, and stored their belongings.

With Esme, who was barely 10 weeks old then, in tow, they fulfilled their wanderlust by embarking on a 10-month trip to explore the world. “Both Shaun and I were keen backpackers before I fell pregnant and everyone thought we were completely nuts when we said that we were going to take Esme when she arrived,” Edwards, who works as a nurse, told the Daily Mail in an interview. The couple toted a single backpack – and Esme – between them as they visited Ireland, Australia, Indonesia, Hong Kong, Malaysia, New Zealand, Taiwan and Vietnam.

So the day has arrived! The start of a 7 week adventure. One ten-month old baby, two adults, one backpack (supposedly), six countries and ten plane journeys.. I have had so many people ask why the hell bother getting everything into one backpack? Good question.. literally every time I have travelled I have brought clothes I never wore on the trip. The other issue is when you have a baby that decides to have a wobbly it’s not ideal to be tied up with several pieces of luggage. I for one, get myself into a tizzy. We are going to be moving around a lot so it needs to be comfortable and stress free. I would be lying if I told you it’s been easy to get everything for the three of us into one backpack. We have had to be extremely ruthless and a little resourceful. For those of you interested in how we did it: 1.We worked on the basis of 5-6 outfits and baby has about ten. 2. We used cloth draw string bags to section our respective belongings. Otherwise if you are looking for one item you will end up pulling the whole pack apart and that would be a right pain in the backside. 3. All products shampoo, SPF, moisturiser etc etc have been decanted into small reusable plastic pouches with a tap. We are considering all products unisex. I don’t mind smelling like a man for a few weeks! Haha.. This saved a heap of space. 4. I searched high and low for compact light weight comfortable baby paraphernalia. Keep an eye on travelmadmum.com for reviews of our teeny weeny cot, compact buggy that also holds the car seat, teeny feeding chair and baby carrier. 5. We have brought a vacuum bag. We haven’t actually used it yet but we will definitely vacuum pack our warmer clothes once we get to warmer temperatures. That will also give us a bit of space if we want to buy anything along the way. 6. I sabotaged my huge make-up bag by popping eyeshadow out of the larger boxes and making little protective pouches. We do have a couple of other miscellaneous pieces of hand luggage consisting of a bag of toys and a nappy bag. Please feel free to spread the word about this blog with those that might be interested by liking and sharing. #travel #travelmadmum #travelingwithababy #backpacking

Their epic journey included a short pit stop in Singapore, where a photo on Edwards’ Instagram account, on which she documents her travels, showed Bayes and Esme enjoying themselves at the Marina Bay Sands’ infinity pool.

While she admitted the going was tough sometimes as she had to endure cramped rooms, take turns doing activities like snorkeling and breastfeed Esme on the go, the experience was priceless.

Checking out all the stamps in her little passport. Just about to board flight 5 of 9 in 7 weeks! It has been raining most days her in Malaysia but at least it was warm. Really so excited for our next stop- Vietnam! We have 24 hours in Ho Chi Minh before we escape the city. Does anyone have any recommendations ? #travel #travelingwithababy #travelmadmum #adventure #backpacking #instagood #instatravel #picoftheday #instapassport #holiday #jetset #travelgram #wanderlust #familytravel #livingthedream #babywearing #baby #mumblogger #langkawi #malaysia #vietnam @ergobaby

“Esme has had so many new experiences. She’s very sociable. She really loves being outside,” Edwards added. Although, she also said that, “At times, I felt sad for her that she didn’t have other kids to play with.” Among some of the more iconic images of Esme included her taking an underwater family selfie in Langkawi, posing on the steps of the ancient city of Hoi An in Vietnam and trekking through Ubud’s famous Monkey Forest strapped to her mother’s back.

Edwards has also started a travel blog, where she hopes to inspire other parents and let them know that having a baby does not spell the end of their traveling days.

And after a brief hiatus since returning home in September last year, the trio are embarking on yet another adventure to Thailand, Cambodia and New Zealand, the Daily Mail reported.