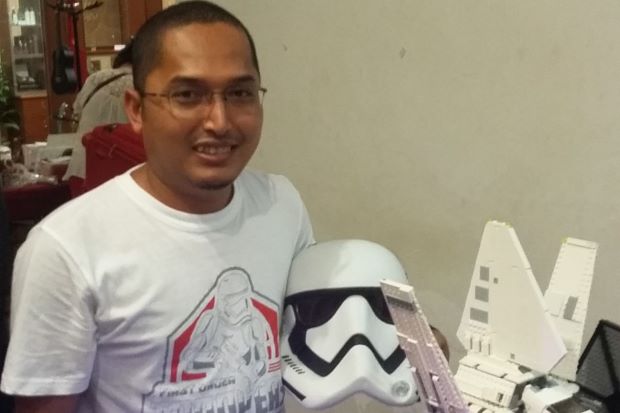 KUALA LUMPUR — Many people have hobbies. Some collect stamps, some collect coins and bank notes, and some collect Lego sets. For many, these collections become their prized possessions.

So it’s quite touching when someone does what Mohamad Shahril Sabari, better known as Victor Engku Shah, is doing: selling off his Star Wars Lego collection every Sunday at the Amcorp Mall flea market to raise funds for the cancer treatments of his wife, Noor Azra Kamaruddin.

I’d heard about Victor and his stall through LCMLUG, a Lego group I’m part of on Facebook. His love and sacrifice for Noor Azra is certainly admirable, respectable and definitely worth supporting.

I met up with him through Daniel Goh of Brick Sanctuary and learned why he comes up from Seremban to Petaling Jaya every Sunday to sell off his prized collection.

“I began collecting Star Wars Lego sets in 2010, and I married Noor Azra on April 24, 2015. Two weeks later, she noticed a bump on her neck and went to get it checked out at a clinic. The clinic referred her to a hospital for follow-up checks, and we went to KPJ Seremban where a CT scan was done.

“The CT scan found a lump in her neck and a follow-up biopsy determined that she had lymphoma,” said Victor.

He added that doctors advised Noor Azra to begin chemotherapy treatments, and with the treatments, more challenges were in store for the couple in July 2015.

“Noor Azra was two months pregnant. We were so happy, but our happiness was short-lived. Doctors advised Noor Azra to have an abortion prior to chemotherapy as the risks were too great for her and the child. She went through the abortion with a very heavy heart and then began her chemotherapy,” said Victor.

Victor ultimately had to leave his job as a finance officer in the private sector to help Noor Azra full-time with her cancer treatments, adding that this was when he began selling off his collection at Amcorp Mall.

“Thankfully, I have been able to work things out with the help from my friends in LBK Malaysia, Lego Auction Group MY and LCMLUG. They have helped out with contributions of financial support and even Lego items for me to auction off,” said Victor.

So, with Lego now being touted as a “better investment than gold,” why not help out Victor Engku Shah while buying a possibly profitable wallet-booster while you’re at it?

He can be found on Amcorp Mall’s second floor every Sunday, or contacted via his Facebook account, Victor Engku Shah.