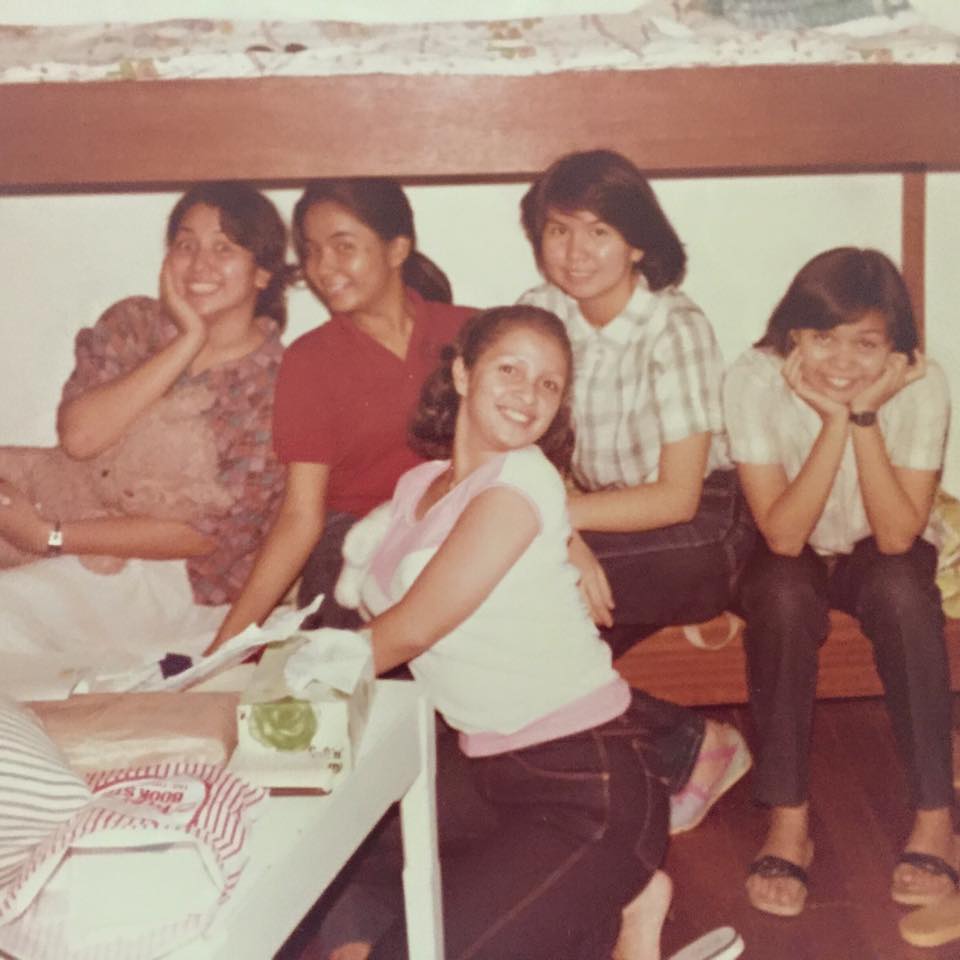 BLESSINGS. The author (leftmost) in senior high circa 1982, with some of her oldest, dearest friends

When No one Asked Me Out (NAMO) for Valentine’s

Remember when there were Ladies’ Nights in most bars in Manila? (Or are they still happening? I wouldn’t know anymore.)

I used to read about them—free drinks, special promotions, battlecries of girl power and all—and I’d think: Kids, you have nothing on us. My girls and I started that years ago. And we called a spade a spade.

In an exclusive girls’ high school, where the difference between the popular (read: with boyfriends and/or suitors) and not-so-popular girls was a daunting chasm, being alone at Valentine’s was an excruciating form of social death.

Classmates would swoon with envy if: a) you had a boyfriend; b) he actually had a car to take you out on dates; and c) he made sure to send flowers or chocolates to your school, where everybody saw them.

You knew when such a special delivery had been made, either professionally or through a friend and emissary, because the red-faced anointed one’s friends would be squealing like piglets.

I remember a classmate of mine who once got four dozen roses, from four different guys; she even made a big show (to the amusement of her posse) of trying to chuck a couple of the bouquets out the window.

I made my oldest, dearest friends in elementary and high school—yes, they remain my best friends on the planet—and ours was a solid, respected gang, thanks to a good mix of nutcases and nerds. Inevitably, the time would come when some of us would have Valentines, and some wouldn’t.

I think it was senior year, though, when most of us were unattached, with no viable objects of desire or suitors on the horizon. So, we decided to celebrate Valentine’s anyway, just us girls, even if it only meant dinner or hanging out in somebody’s house, dancing, eating spaghetti and smuggling in the booze.

We thought “girls’ night” was too generic and lame a name for the exercise. So, with feigned self-deprecation, we christened it NAMO Night—No one Asked Me Out.

At first, everyone thought it was cute, even the attached girls, who actually wanted to show up.

I think it was Feb. 16 or so, as the day itself fell on a school day, but it meant a lot of laughter, a lot of music and a lot of drinking. I vaguely recall being so intoxicated that a previous allergy to alcohol was completely obliterated.

NAMO Night was born. We carried it over to college, and I still remember the looks of disbelief on new friends’ faces when they learned what it meant.

Why not? we argued. Calling it a simple girls’ night-out sounded like a denial, an outright lie—like it was okay to be alone, like we really preferred to have fun this way, like we didn’t mind not having someone to kiss and hug at this point in our lives.

The fact was, in our late teens and 20s, we were dying, aching to be in love with the man of our dreams. We were talking about when we wanted to get married (24? 25?!), how many children we wanted, and what gender.

The important thing was, we weren’t afraid to admit it and didn’t hide behind some

cool facade—which was pretty revolutionary for sheltered young adults of our time. And somehow, that made us stronger and braver.

When one of us was in a relationship, we happily excused her to spend time with her guy (although “checking in” with the girls once in a while was mandatory), and we were there with beer, tears and reassurances of support when relationships failed, as they often did at this stage in our lives.

I remember a couple of us driving a friend to her boyfriend’s house in the boondocks. She broke up with him while we waited in the car, already starting on a bottle of tequila.

In college, close male friends joined the fun; when two friends became a couple, they had to drop out of the main happening, although they were still welcome on special occasions, like birthdays.

But NAMO Night was a bonafide social event.

When we started working, even as some relationships endured, conversely, the success rates of blind dates and set-ups plummeted. There were long stretches when no one would be asked out, by anyone, anywhere.

Later on, for those of us with badly beaten-up hearts from messy break-ups—I, for one, had to part ways with a fellow I thought I was about to marry and move away with— NAMO Nights became literal lifelines.

Those were the times that confirmed the fact that friends are truly among life’s biggest blessings, no matter what time of year.

(We still hadn’t realized, though, that you couldn’t drink the pain away. It was still there the next day, of course, along with a hangover bigger than our shoulder pads.)

Some of us got married, others moved abroad; I recall one NAMO Night when it was just two of us, my friend Maite and I, so sloshed that the bar’s friendly doorman Romy (we were on first-name basis, of course) had to help us to our car, one girl on each arm. (“Ma’am, sino magmamaneho ngayon?”)

Inevitably, it also happened: some Valentine’s Days, I would be the only one without a plan. A NAMO Night all by myself. That was the tough part, but that’s also when the biggest light bulb moments came.

I learned that I had to enjoy my own company first, and most. (Whitney was right about that greatest love business, after all.) That you can’t hold people too tightly, because they’ll suffocate, and they weren’t meant to live your life for you, anyway.

I learned that too much alcohol is bad for you. (No, really.) And that there is limited, finite love that doesn’t last—but there is also a love that lasts forever, because it was ours even before we existed.

For one thing, it no longer matters if someone asks me out or not, although in the spirit of the first NAMO, I must admit that, at age 51, I would still be tickled pink to get roses from Michael Fassbender, or from a good man who loves dogs and the ocean as much as I do. (That would be quite the icing on the cake, although the cake’s tasting pretty good as is.)

For another, I would also treasure flowers from relatives, friends, colleagues. I would even buy a big fat bouquet for myself if I felt like it—and I have.

This Valentine’s, I’ve got a little weekend planned for myself. Next year, maybe the girls (married, mothers, single mothers, separated, whoever’s available) and I will dress up and have dinner somewhere fancy, a couple of days after V-Day—traffic, you know.

This is my love letter to you, girls. But here’s the lesson of countless NAMO Nights: You don’t have to wait for somebody to ask you out. Life is out there; love is everywhere. Just go. But please make allowance for