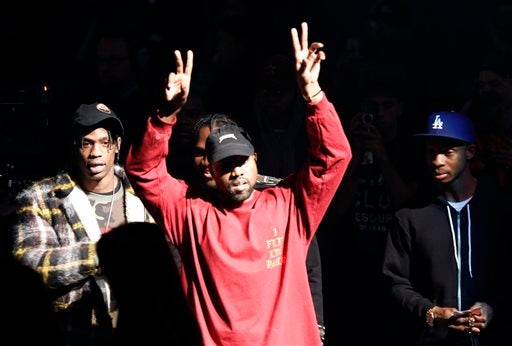 Kanye West gestures to the audience at the unveiling of the Yeezy collection and album release for his latest album, "The Life of Pablo," Thursday, Feb. 11, 2016 at Madison Square Garden in New York. AP PHOTO

West unveiled his new album and latest fashion collection before a packed crowd at the massive arena in the most hyped event of fashion week in the Big Apple.

The 38-year-old, self-styled modern renaissance man—dressed in a red sweat shirt and black hat—spent an hour singing from “The Life of Pablo,” while models showcased pieces from his Yeezy Season 3 line.

Standing or seated, some with naked torsos, his models did not move, nor smile nor look at anyone. The only flash of movement was a fleeting appearance from British supermodel Naomi Campbell.

“I feel so happy to be able to follow my dream and create as an artist,” West told the audience.

His reality star wife Kim was there with platinum blonde hair and dressed in fur. The couple’s daughter North and the rest of her family were also along for the ride, including Kim’s sisters Kourtney and Khloe Kardashian and supermodel half-sister Kendall Jenner.

“Tell me how you all feel about the clothes this season!” shouted the mercurial musician. “Make them cheaper!” shot back one spectator.

READ: Is Kanye West Going to Make His Next Shoe Collection Cheaper?

West offered sports-inspired apparel with large sweaters, military-style boots and jackets, each generally in one tone from a neutral palette of olive, beige, yellow, gray and white. West partners with Adidas for the collection.

The queue outside stretched more than 100 yards (meters) to see the boundary-pushing rapper, who has in the past compared himself to Michelangelo and floated an apparent bid for US president in 2020.

“Did I live up to my promise on that album?” he asked to cheers.

“This is really a gospel album,” he said. “I feel so happy.”

READ: Just How Many Artists Are in Kanye West’s ‘The Life of Pablo’?

“It’s really progressive,” enthused Nathan Neal, a teenager, when asked what he thought of the album. And the show? “It was excellent.”

West spoke of his happiness in straddling the fashion world, saying that his dream is to be creative director of French fashion house Hermes.

Members of the fashion pack have lauded the Chicago-born superstar with doing much to make interest in men’s fashion mainstream.

“A lot of people got into fashion because of him, because he made it cool,” said Ryan Sukram, a member of the audience in his 20s.

“I already bought a lot of his stuff, shoes and everything,” he said.

He also liked the album, saying: “It’s universal. Look at this line. There are black people, Asian people, white people, everything.”

Noah Zagor, the owner of Meyvn, a menswear store in Chicago, praised West for doing much for fashion.

“He opened up the minds of younger guys who may not necessarily be into fashion but care about what’s cool in lifestyle, in culture and he’s produced a line that represents that,” he told Agence France-Presse.

“I think what he does brilliantly is put together a spectacle. The show, the scene, the marketing, the concept, it’s amazing. He commands attention with what he does,” he added.

West’s show was broadcast in cinemas across the planet, busting out of the more traditional confines of a fashion audience as seen at Nicholas K and BCBG Max Azria on Thursday, the opening day of New York fashion week.

BCBG unveiled its fall/winter collection at Moynihan Station, which last season became the new fashion week headquarters, saying its muse was a performer with “individualistic style” and “artistic ingenuity.”

It unveiled a rich winter palette of light grey, cream and camel paired with merlot, ink blue and carbon. There was lots of layering, knits and denim, with color-blocked bags and shearling-trimmed footwear to emphasize the “whimsical carefree spirit” of the muse.

A total of 147 designers are on Fashion Week’s official roster this February, with 97 catwalk shows and 50 presentations. Still more designers will present their creations independently.