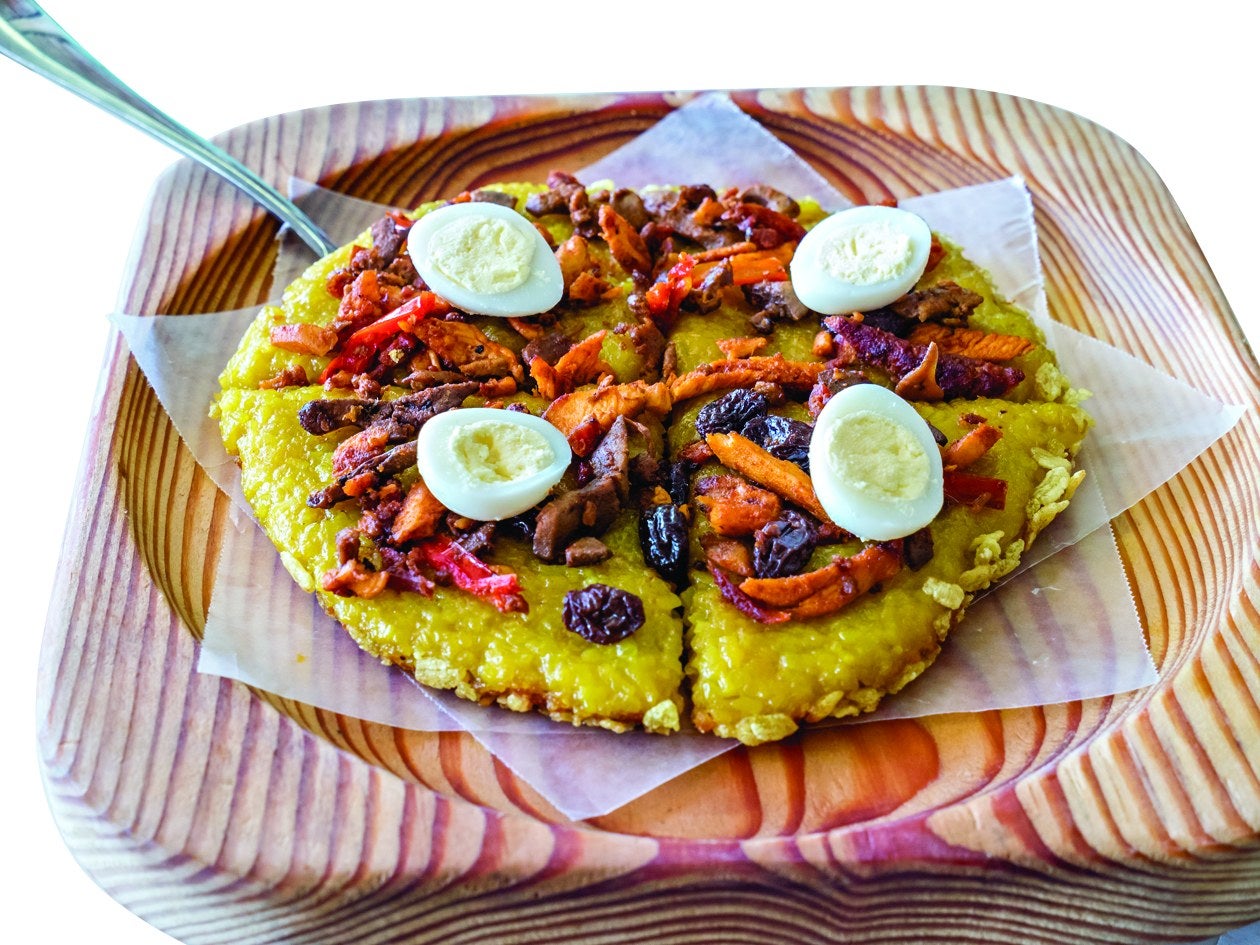 So, for that particular generation, Tayag has resurrected the diner in the 21st century.

As in the old days, the menu, called short order, is a series of photographs of the dishes pinned on the wall.

Tayag tweaks Filipino comfort food from his youth in Pampanga.

He remembers that the bringhe, said to be the Pampanga version of the Spanish paella, was traditionally cooked with glutinous rice in coconut milk, fish sauce, chicken broth and turmeric in a deep wok.

During fiestas, the bringhe is topped with meat and gizzard. The guests consumed the top part, naturally, leaving the tutong, or the rice at the bottom, that had been burnt to a crisp.

Tayag’s Bringhe na May Tutong is served like a flattened pizza, cut into wedges and smothered with quail eggs, chicken and chorizo. Every bite includes the signature tutong.

The Pork Belly Adobo Confit is a nod to the way the French cook meat in its own fat. The pork adobo is preserved with a souring agent and marinated overnight, then submerged in lard in slow fire for several hours.

The deep-frying makes the skin crunchy.

According to Tayag, the traditional adobo marinade was made of vinegar, garlic and fish sauce. The meat was aged to remove the sourness.

When lard was not available, the cook substituted soya oil and simmered the meat for a long time. In frying, the skin became crisp and its juices caramelized, thus producing a tasty sauce.

To balance the flavors and colors, Tayag’s pork belly adobo is served with mango salsa and salted egg on a bed of grilled eggplant. The chef says the old folk combined the sour and savory taste of adobo with the sweetness of mango and banana.

“The Filipino taste buds lean toward salty, sweet and sour,” he notes.

Tayag’s signature salads are a play of contrasts. Once used as animal feed, the lowly fiddlehead fern is elevated into the Ensalada Pako with a tarty mango-dalandan dressing made from dried mango, calamansi, honey, mustard, native orange and salted duck egg as a thickener.

This cold salad is a counterpoint to the warmth of fresh lumpia, a simple medley of grated green papaya, tofu and squash on romaine lettuce.

The Ice Lollies, creamy fruit salad on popsicle sticks, bring back memories of the PX days when Filipinos would hie off to Clark to lap up imported canned goods.

The canned fruit cocktail is no exception. The base is cream cooked in double boiler and mixed with Parmesan cheese for an indulgent dessert.

Carabao’s milk is one of the restaurant’s prime ingredients. It’s used for the tibok-tibok, a Kapampangan pudding; the pastillas; and the ube halaya used to thicken the halo-halo.

Tayag, who owns a collection of vintage ice shavers, points out that the halo-halo was introduced by the Japanese. Theirs was a shaved ice dessert with sweet aduki beans and milk.

This milk also enhances the coffee, a smooth blend of arabica and barako.

Meanwhile, Tayag has also built an extension of his private dining place in Bale Dutung (House of Wood).

Almazen is a pun on a popular children’s song. The extension is a place for his food memorabilia such as bottles, appliances and Coca-Cola merchandise.

The Sisig Terrine takes after the Kapampangan sizzling pig’s ears. It is served as a cold dish with its gelatinous but crunchy appetizer.

“The terrine is set with the collagen from the pig’s ears, which are seasoned with a tangy mix of calamansi and pineapple juice,” says Tayag.

Tayag loves how the chicharon (pork crackling) adds texture to a dish.

Just as Downtown Café has a combination of kinilaw (ceviche) and chicharon called Chinilaw, Almazen’s Fishcharon is a crisp-fried tilapia skin served with burong hipon (salt-fermented rice with shrimps) and fresh mustard leaves.

The Talangka Bringhe is like a mini rice pizza, a petite, savory, glutinous rice cake crowned with a fried crablet and smothered with Pampanga’s signature taba ng talangka (crab fat).

An inveterate traveler around the country, Tayag drew inspiration from the Tausugs in Jolo. The rice is cooked in sea-urchin shells.

Using his sculpting skills, he recreates the tuyom shell with glutinous rice flour dough, colors it in squid ink and coats it with crumbled, salted Chinese noodles. He then fills it with seaweed from Pangasinan and the Ilocano KBL dressing: kamatis (tomato), bagoong isda (anchovy paste) and lasuna (shallots).