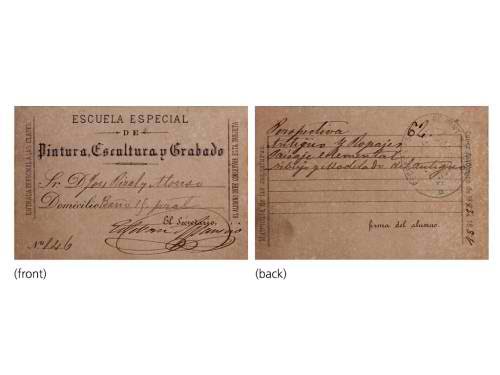 Student ID of Rizal, commission letter of ‘Heneral Luna’ up for auction

LEÓN Gallery will auction off artworks, antiques and objets d’art from distinguished provenances as part of its annual auction in behalf of Asian Art Council (ACC) Philippines.

Established in 1963, ACC awards grants to artists, scholars, and arts and humanities professionals, as well as US and Asian organizations and institutions for research, study and creative work.

León Gallery director Jaime Ponce de León notes the auction is different from the rest because “it sees the entry of ephemera, manuscripts and autographs for the first time.”

“We have the only known extant identification card of Jose Rizal from Escuela Especial de Pintura, Escultura y Grabado,” says Ponce de León. “We have two calling cards of Leonor Valenzuela, a letter from Dr. Ferdinand Blumentritt to Jose Rizal, a letter to Paciano Rizal from Leonor Lansing that references her as the third Leonor in the love life of Jose Rizal, a commission for a service rendered by a gentleman from General Antonio Luna, and some more.”

One of the most significant pieces is Fernando Amorsolo’s 1915 oil-on-canvas “Lavandera,” from the Brent International School Inc. collection. It has a starting price of P3 million. Amorsolo has 12 other works up for grabs on the auction.

“This piece, as of today, is the earliest painting by Amorsolo to be offered at auction,” Ponce de León says. “At first glance, it looks like a painting by his uncle Fabian de la Rosa, who was his first teacher. The work does not yet manifest the light effects that he was to learn a few years later from the Spanish master Joaquin Sorolla, he became very much known for.”

Another important piece is Ricarte Puruganan’s “Adobe Stone,” which won third place in the Art Association of the Philippines (Boys Town Carnival) in 1949. Starting price is P600,00. Puruganan was one of the “Thirteen Moderns.”

Joya’s 1961 untitled piece, rendered in oil on canvas, has a starting bid of P500,000. This is one of his works that eschew rigid geometry in favor of loosely delineated and relaxed shapes.

Another highlight is Botong’s watercolor-on-paper “Detail No. 1”—the study of one of two sections of the four-panel “Progress of Medicine,” one of his important murals of 1953. It has a starting price of P300,000.

BenCab’s 1967 “Espeleta,” rendered in acrylic or oil on wood, depicts the shanties in the Bambang, Manila, of his childhood. It has a starting bid of P300,000.

Chest of Drawers with Escritorio, circa 1850, is a noteworthy piece of furniture. It has a starting price of P500,000.

Social historian Martin Imperial Tinio Jr. says a chest of drawers with an escritorio or fall-front desk is not ordinary.

“Found only in houses whose owners were men of affairs, they were usually found in the cuarto mayor or master bedroom and thus served as the repository of important deeds or documents,” Tinio says. “Secret drawers concealed among the numerous compartments of the escritorio also safeguarded valuables and money.”

The Sheraton sideboard from the late 19th century has a starting bid of P200,000.

“This side table is a graceful example of a Sheraton-Style side table and, even if it is not a large piece, is made with elegant proportions and inlaid with strips of kamagong and germetrically shaped pieces of carabao bone,” Tinio says.

This sale is the second consecutive León is holding in partnership with ACC.

“We are privileged to be enjoined in this partnership with the noble task of raising funds to afford international opportunities for our artists, scholars and cultural organizations,” Ponce de León says.

“For decades, ACC has been responsible for sending worthy recipients to the art centers of the world, in Asia, America and Europe, on their journey not only to self-discovery but also discovery of the varied cultures and world masterpieces, and thus, upon returning to our country contributing to the enrichment of our arts. As a gallery owner and a lover of the arts, I feel that it is a humble undertaking to be of help for such enormous reach for the improvement of our cultural environment.”

Ponce de León says due diligence was conducted to ascertain the authenticity of the works.

“We have done extreme due diligence on every work we offer with the securing of the approval of the respective authorities of every artist—Don Rafael Perez Madero for Fernando Zobel, Silvia Amorsolo-Lazo for Fernando Amorsolo, Gisella Olmedo Araneta for works by Onib Olmedo, and so on,” he said.”