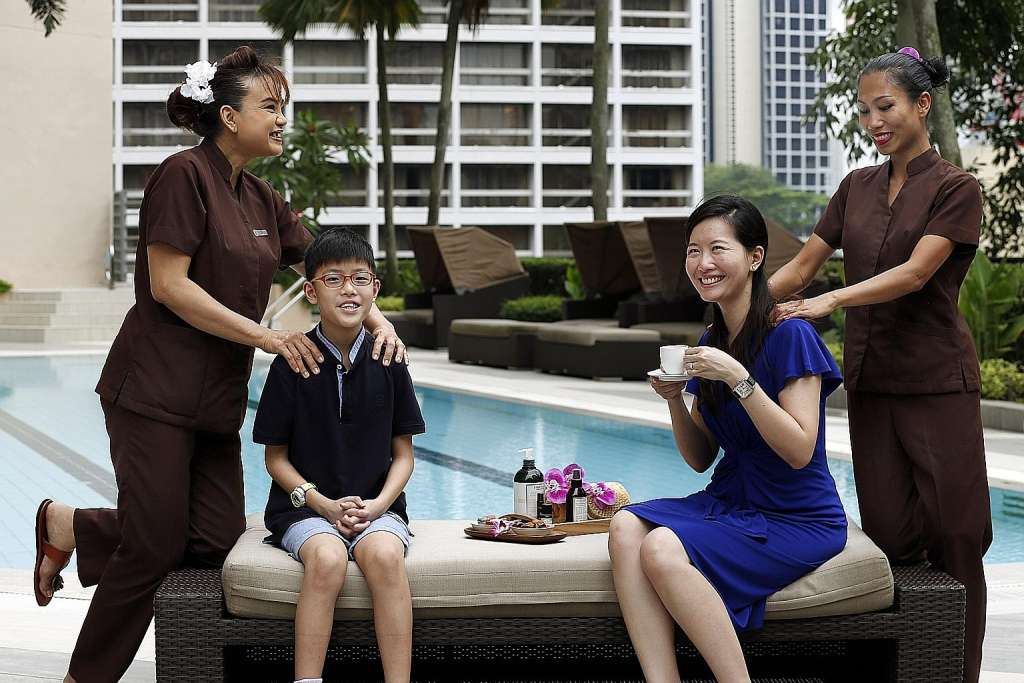 Housewife Miko Ong and her son Iain (both above), nine, having a massage at Four Seasons hotel. ST PHOTO: LAU FOOK KONG

SINGAPORE — When a father wants to bond with his son, they could go camping or cycling or – like restaurant group director Raymond Lim – enjoy spa sessions together.

Lim, 37, introduced his son Ryan to the spa when the boy was eight. A director at Les Amis Group Holdings, he travels often in his job and is used to having massages at the spas in the hotels he stays at.

During a family holiday in Bangkok two years ago, Ryan had a shoulder massage at their hotel. He is now in Primary 4.

“Rather than send him to hotel kids’ clubs, I wanted to expose him to something different, something I didn’t have as a child,” says Lim.

“It’s my interpretation of father and son bonding,” he says, adding that having massages together is more relaxing than their other shared pastimes, such as football.

A few times a year, the family of three enjoy a day out at the spa, getting body massages and swimming. Lim and his wife, senior paralegal Kim So Young, 39, may also get manicures and pedicures. Each session, which lasts several hours, costs at least $700 in total.

He is not the only parent who sees the spa as a family experience. While spas are predominantly an adult domain, some places are seeing more children, some as young as six, as well as more boys enjoying the facilities. Customers are also showing interest in children’s birthday parties centred on beauty treatments.

Parents pay for services such as manicures, pedicures, facials and massages for their young ones.

Tomoka Nguyen, director of Espa at Resorts World Sentosa, says: “There are more people asking for spa experiences they can share with their kids.”

This is one reason Espa will be launching spa packages targeted at family groups of three to six, starting next month. Priced at between $180++ and $330++ a person, whether child or adult, spa treatment options include having a hammam, or Turkish bath, together and going to the steam room.

One factor driving this demand is the desire to help kids destress.

Housewife Miko Ong, 35, sees the benefits of a relaxing time at the spa, which was why she introduced it to her nine-year-old son, Iain.

She started going for massages regularly about five years ago, to “unknot” muscles strained from doing computer work during more than 10 years in IT, an industry she left at the end of 2014.

Mother and son sometimes have massages together.

She says these include less stress from schoolwork and enrichment classes, better sleep and muscles that are soothed after Iain does sports such as rollerblading and taekwondo.

She says his massages, which cost between $150 and $200 each, complement the chiropractic sessions she takes him to, every six months, in a “holistic wellness package”. The chiropractor checks his growth development, such as spine alignment and posture.

Ong and her engineer husband, who is in his early 40s, let Iain, their only child, have a shoulder massage at the age of six.

Although he found massages ticklish at first, Iain says he now finds them relaxing and likes the “lavender-like” scent at the spa.

Ong says: “If he has extra training for taekwondo, he will tell me his legs ache.”

Auriga Spa at Capella Singapore hotel, which came up with a spa menu for teens and children in 2011, has seen more bookings for teen massages, which cost $95 each. “We frequently have parents wishing to relax with their children as a treat during stressful exam periods,” says its spa director Alsu Abdulina.

At the spa at Four Seasons Hotel Singapore, spa manager Eve Chiam regularly sees children coming for massages to relieve the stress in their shoulders from carrying heavy school bags. These aromatherapy massages cost between $160 and $230 each.

Without giving specific figures, she says: “In the past four years, there have been more boys coming in, but there are still slightly more girls than boys.”

Paediatrician Janice Wong from Thomson Paediatric Centre says: “Going to the spa usually does not present issues regarding the physical development of kids, but emotionally, they may develop the feeling of being spoilt by parents.”

Dr. Yang Chien-Hui, a senior lecturer at SIM University specialising in early childhood education, cautions: “If parents focus too much on looks, beauty and a luxury lifestyle, children may consider these as priorities in life rather than intelligence, interests, characters and relationships.”

But sociologist Paulin Straughan says what is important is how the parent “contextualises” a trip to the spa for the child. “We should not cast judgment, it’s a private decision within the family. We should focus on what the activity represents, such as drawing parents and child together.”

Sociologist Sam Han, who is writing a book on lifestyle and self- enhancement, says it is natural to see more men and boys going to spas in Singapore because “the very notion of spa has shifted”.

“Spas are not exactly a luxury anymore, it’s no longer as elite,” says Dr. Han, an assistant professor at the School of Humanities and Social Sciences at Nanyang Technological University.

“Spas used to have this notion of being very expensive but there are various tiers in the spa world. Spas are businesses and it makes sense to have greater participation from groups that were traditionally not the target audience.”

While the prices of spa treatments that some parents are willing to spend on their kids may seem extravagant to some, Dr. Straughan, an associate professor at National University of Singapore, says this is “possibly linked to the fact that there are more dual-income families and smaller nuclear families”.

Increased awareness has accompanied the rise of the wellness industry and led to younger spa clients.

Former actress Jazreel Low, chief executive of Asmara Lifestyle, a spa and lifestyle group, says she has encountered more mothers who are “willing to start their children earlier – some as early as 10 years old – on facials”.

“They want therapists to educate their children on how to take care of their skin,” says Low, whose group includes Aramsa The Garden Spa in Bishan Park II, which has a kid’s spa menu for youngsters aged four to 14. She says the youngest client has been a girl of “about five or six”.

Representatives of spas and salons interviewed say they are careful to use child-safe products and to observe protocols such as having parental supervision and trained masseuses for children.

Nail Candy, a nail spa and salon at I12 Katong, uses organic nail polishes in its “Princess” range of manicures and pedicures for children that are free of chemicals such as formaldehyde, which is found in some nail polishes.

“Children’s nails are not as hardy and are thinner than adults’. We buff them less and don’t do cuticle trimming which can be painful,” says Nail Candy manager Khim Lim, who adds that its nail spa parties are part of “a trend for parents looking for options for birthdays”.

“There are no concerns because spas for children use natural products that are free from parabens and chemicals, and have similar health policies for clients both young and old, which address health conditions such as muscle or nerve ailments and allergies.”

She adds that parents must do their homework and ensure that spa staff are appropriately trained and sheets and towels changed.

Sometimes kids ask for beauty treatments for the sheer girly fun of it.

About two years ago, she started taking Sarah, who has a younger brother, with her to the nail salon to do manicures and pedicures occasionally for “quiet mother- and-daughter time”.

When Sarah was very young and expressed interest in her mum’s make-up, Tan resisted it. She later felt that exploring make-up was a “natural process” for girls. Besides, Sarah got presents such as make-up sets as a preschooler.

“I realized that if she wants to try it out, I should get her proper makeup, rather than from a toy store.”

The spa that Pinatubo built