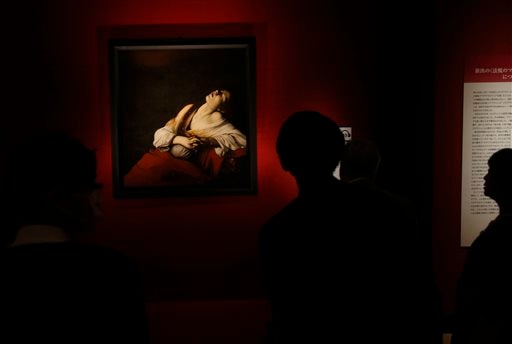 People look at "Maria Magdalene in Ecstasy" by Italian maestro Caravaggio during the media preview prior to the opening ceremony of the "Caravaggio and His Time: Friends Rivals and Enemies" exhibition in Tokyo, Monday, Feb. 29, 2016. The painting, which was discovered in 2014 by a leading Caravaggio scholar among his family heirlooms after being lost for more than 400 years, will be shown to the public for the first time in the world at the exhibition starting Tuesday, March 1 along with his 10 other paintings at the National Museum of Western Art in Tokyo. AP PHOTO

TOKYO— A long-lost painting by Italian master Caravaggio is being shown to the public for the first time at an exhibition in Tokyo.

“Mary Magdalene in Ecstasy” was found in a private collection in 2014 and identified as an original by Caravaggio specialist Mina Gregori, an Italian art historian. The 1606 work was previously known only through copies made by followers of the artist.

The painting is one of 11 Caravaggio works in the show, Caravaggio and His Time: Friends, Rivals and Enemies, which opened Tuesday at the National Museum of Western Art and runs through June 12. It also includes 40 paintings by other artists who were influenced by him.

Caravaggio, who died in 1610, was an innovative painter widely viewed as one of the founders of Baroque art. His work influenced many other 17th century artists.