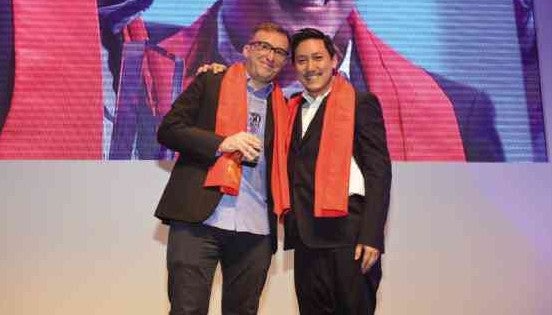 GALLERY Vask in Manila is awarded The Best Restaurant in the Philippines at Asia’s 50 Best Restaurants awards ceremony, sponsored by San Pellegrino and Acqua Panna.

Owned by chef J. Luis “Chele” Gonzalez, Gallery Vask was ranked No. 39 Monday by the annual awards sponsored by San Pellegrino and Acqua Panna. It honors the most outstanding restaurants in the region, handed out by William Reed Media, which also bestows the World’s Top 50 Restaurants awards.

Gonzalez is from Torrelavega, Spain, near the Basque region, but came to work in the Philippines by way of El Bulli, as well as Arzak and Mugariz, among other posts.

In a surprising move, he has changed the menu at Gallery Vask—from a Spanish-accented one, heavily influenced by molecular gastronomy, to something Filipino-influenced, enhanced by the refinement and precision of technique from his training.

At a dinner last year he described the menu as “completely Filipino… We’re working with local producers and sourcing from indigenous communities like the Aetas. All our seafood is now 100-percent local.”

He said the award is “not just for me but for the restaurant scene in the Philippines, especially fine dining. If the award can give it new energy, I will be very happy.”

His signature dishes include Binulo, a clear, subtly sour soup flavored with alibangbang leaves used by the Aetas in northern Philippines, who also cook food inside bamboo or bulo; and Tiradito, raw tuna loin enveloped in coconut gel and served with pickled seaweeds, which takes inspiration from kinilaw, the Filipino ceviche.

This year, Gonzalez had the privilege of being part of the Philippine team of chefs in Madrid Fusion 2016. He explained his restaurant’s philosophy of translating cultures, history, traditions and various inspirations into flavors.

He has been able to meet farmers and fishermen, growers, producers and artisans who have shared their valuable expertise, helping the chef create new dishes in the Gallery Vask kitchen.

At the awarding ceremonies, Gaggan in Bangkok claimed the top spot in Asia’s 50 Best Restaurants for a second consecutive year.

The 2016 list welcomed 10 new entries, including three from Japan.

China accounted for 13 restaurants on the list, while Singapore and Japan each had 10.

With 13 nations represented, the 2016 list included restaurants from more countries, showcasing a rich variety of dining experiences across Asia.

Host country Thailand is also represented by Nahm (No. 8); Issaya Siamese Club, which climbed 20 notches to No. 19; and Eat Me at No. 23.

Narisawa (No. 2) was named The Best Restaurant in Japan for a fourth successive year. Four of Japan’s remaining nine entries were in the top 20. Japan also welcomed three newcomers, namely La Maison De La Nature Goh (No. 31) in Fukuoka, as well as Tokyo-based Den (No. 37) and Kyoto’s Kikunoi (No. 42).

Rising two notches, chef André Chiang’s Restaurant André (No. 3) held the title of The Best Restaurant in Singapore for the fourth consecutive year.

Extending his influence in the region, Chiang also impressed diners with his Raw restaurant in Taipei, which entered the list at No. 46.

Amber (No. 4) in Hong Kong reclaimed the title of The Best Restaurant in China from last year’s winner Ultraviolet (No. 7). The list had nine Hong Kong restaurants, including first-time entry Ta Vie (No. 48).

Entering the list at No. 15, Mingles in Seoul not only claimed the Highest New Entry Award but also the title of The Best Restaurant in Korea.

Another new entry, Locavore in Bali, debuted at No. 49 and was named The Best Restaurant in Indonesia.

Indian Accent climbed 13 notches to No. 9 and was awarded The Best Restaurant in India for a second year.

One To Watch, sponsored by Peroni Nastro Azzurro: Florilège. The One To Watch Award honors a restaurant that is outside the Asia’s 50 Best Restaurants list but is identified as the rising star in the region. Florilège in Tokyo is dedicated to modern French cuisine presented with impeccable style. Chef-owner Hiroyasu Kawate reveals his creativity and mastery of French cooking through a multicourse tasting menu.

Asia’s Best Pastry Chef, sponsored by Cacao Barry: Cheryl Koh. Singapore-born Cheryl Koh honed her skills in Michelin-star restaurants in Paris, Dubai and Hong Kong before returning to her home city in 2013. Drawing on her experience as pastry chef at Les Amis, she launched Tarte by Cheryl Koh in April 2015, a retail concept in Singapore’s city center that is part of the Les Amis Group. Using inspiration from her travels, Koh creates delicate desserts that showcase her classical training and creative instincts.

Highest Climber Award: Quintessence. A Tokyo favorite since 2006, Quintessence (No. 20) earned the Highest Climber Award, moving up 29 notches from last year. Chef Shuzo Kishida perfected his skills at three-Michelin-star L’Astrance in Paris, and his modern French cuisine continues to impress discerning diners with its exquisite presentation, innovative use of fresh ingredients and attention to detail.

Other honorees included chef David Thompson of Nahm in Bangkok and Long Chim in Singapore, who is this year’s recipient of The Diners Club Lifetime Achievement Award.

William Drew, group editor of Asia’s 50 Best Restaurants, said: “Now in its fourth year, these awards reflect the growth and diversity of Asia’s dining scene. The 2016 list includes 10 new restaurants and showcases the best dining experiences in 13 countries, more than ever before. Asia’s 50 Best Restaurants strives to reward creativity as well as culinary excellence, and all 50 restaurants on the list, as well as the individual award-winners, exemplify these qualities.”

The divisions are designed to represent the Asian restaurant scene as fairly as possible at the current time and are agreed with the Academy chairs.

Each region has its own panel of 53 members, including a chairperson. The panel is composed of food writers and critics, chefs, restaurateurs and highly regarded “foodies.”

Each panelist has seven restaurant votes. Of the seven votes, at least three must be used to recognize restaurants outside of the voter’s home country.