In the throes of Passion Pit | Lifestyle.INQ ❮ ❯ 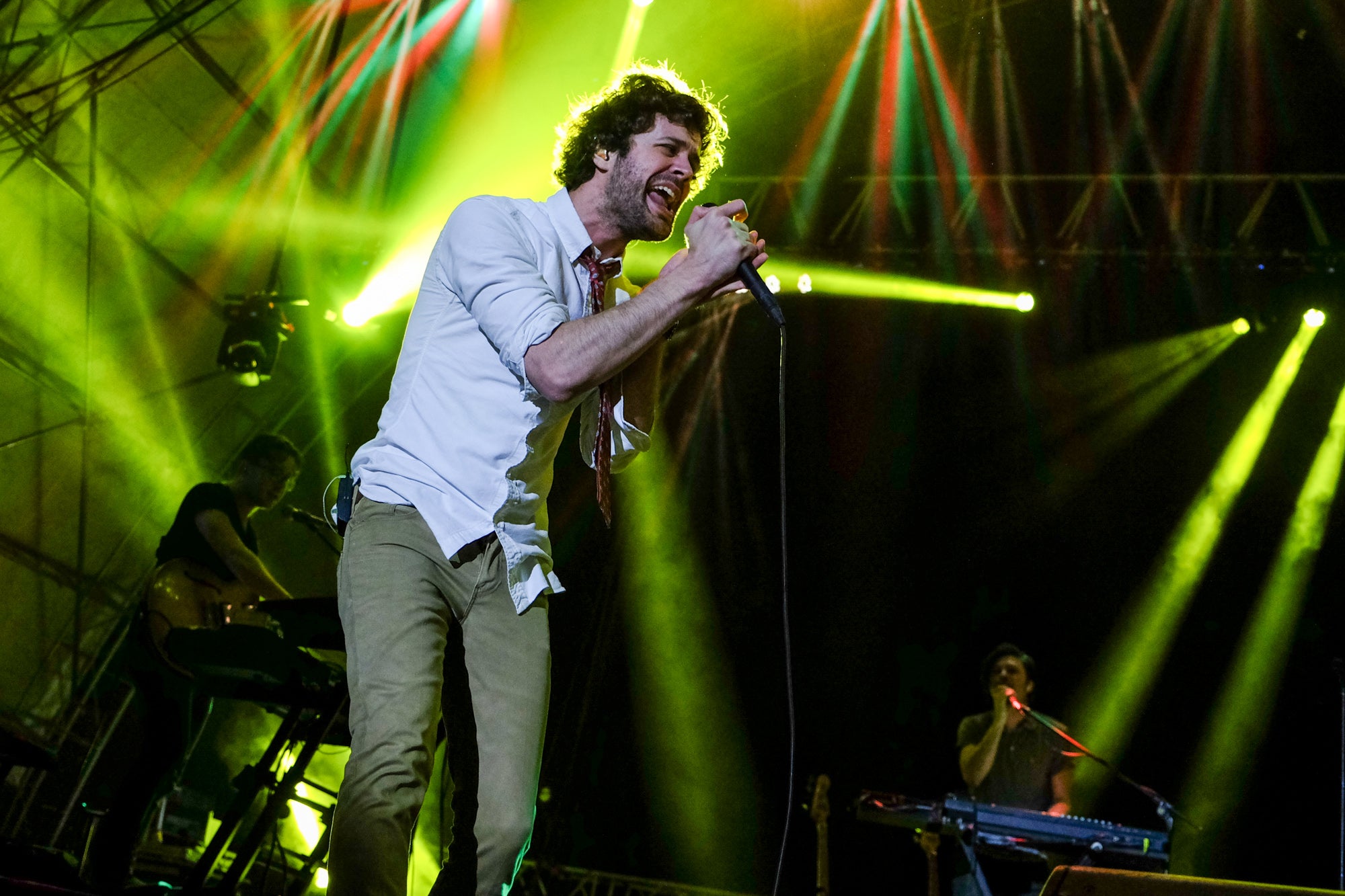 In the throes of Passion Pit

If there’s one thing on Michael Angelakos’ mind at the time of this interview, it’s anxiety. Sitting in a small makeshift room, the frontman of indietronica project Passion Pit shared his thoughts on being part of a music festival.

“These walls are really freaking me out because they keep moving. The walls are moving,” Angelakos told Inquirer Super, hours before Passion Pit went onstage for the final set of the music fest. “I kind of get anxious backstage… I can’t control this kind of anxiety. It’s like there’s so many people walking around and you just want to hang out and be a sociable person, but you’re like, ‘I’m really nervous about playing my show… I’m not nervous about playing my show.’

“It’s like a crazy ongoing inner dialogue where you play with the person you want to be, which I think we all have… And you’re waiting in line for the bathroom and everyone’s staring at you. So it’s a funny, weird thing.”

Along with fellow indie hitmakers Stars, Chvrches and Oh Wonder, Passion Pit was in town for the recently concluded GoodVybes Fest, held at the Aseana City Open Grounds. While Angelakos wrestled with performance jitters and jet lag backstage, avid fans were happy to again see Passion Pit perform in what seemed to be its first show in months.

The band was set to play Manila last year, but the show was canceled along with several other tour stops, reportedly due to Angelakos’ bout with pneumonia.

Illness aside, 2015 had certainly been eventful for the 28-year-old singer-songwriter-

producer. After Passion Pit’s third studio album “Kindred” was released in April, Angelakos and his wife quietly announced their divorce in August. Then, in November, he admitted being gay.

Angelakos talked about these things with candor: “When you’re just being yourself, I think it’s kind of hard to deny that. In the end, you win out no matter what anyone says, because you’re just going to live your life… Honestly, I was just tired of holding it in.”

Angelakos is no stranger to shocking revelations, as well as the backlash that comes with it. Known for quirky, high-pitched vocals and sunny synthpop tunes, Passion Pit’s hits actually have sad stories to tell. Since 2012, Angelakos has been open about his personal struggles in various interviews.

While mainstream fans were starting to get hooked on the infectious beats in “Take A Walk” and “Carried Away,” Angelakos had to cancel tours to seek treatment for bipolar disorder. He even shared his experiences in a public-service announcement for Bring Change 2 Mind, a nonprofit organization founded by actress Glenn Close that aims to end the stigma of mental illness.

Critics had accused Angelakos of using his condition as a twisted marketing ploy for his second studio album “Gossamer.”

His recent coming out, on the other hand, was virtually without fanfare; the revelation was picked up by media only after Angelakos casually revealed it in a podcast interview with Bret Easton Ellis.

As “Kindred” was released the same year, was he also accused of pulling the same publicity stunt?

“No,” he clarified. “I wouldn’t normally talk about these things if I wasn’t in the position to do it. What happens is I do it for the career first because I’m scared, and then I realize that it’s incredibly empowering to talk about it. You think it’s a publicity stunt… but if you’re being honest, it doesn’t read that way. If you’re telling the truth, most people can tell.”

It’s been a pretty wild ride for Passion Pit, and Angelakos admits that he’s learned a lot in the past five or six years. For him, change starts with honesty. “When you come clean, you have less anxiety about your career in general; you make things better, and you live your life better. All these things start becoming much more logical and easy. Everything else improves,” he explained.

“The voices of dissent die out because they lose interest,” Angelakos continued, “because why they’re interested is probably because they dislike you for some reason or another. They stop disliking because they don’t care anymore. People who like you, who believe in you, keep believing in you.”

Angelakos has also gradually learned to take criticism in stride, and consider other people’s opinion. It’s understandable that, even now, listeners might still be having a hard time digesting that his lyrics mostly come from a dark place. While this doesn’t exactly diminish the maximum electropop euphoria that is Passion Pit’s repertoire, it does put things in perspective.

“I used to be terrible, and that was also part of what made so much stuff really good, because I was just obnoxiously self-assured,” he said. “Sometimes other people’s opinions are really right and I realize, oh my God, how many great opportunities I’m missing out on because I didn’t take that really good idea that was just being given to me. And because I was too proud or something, I missed out on a hit, possibly. So, you know, it’s just getting older, I think.”

Granted, he’s come a long way from the bright-eyed romantic who writes songs about the women in his life, or the tortured soul who transforms his mental health issues into potential radio hits. As for the project’s next album, Angelakos predicts that Passion Pit’s perennially sunny disposition might finally change.

“It’s not a happy one. And I think that’s okay,” he said. “This has been a record I’ve kind of been meaning to make for a while. I’m actually really excited about it.”