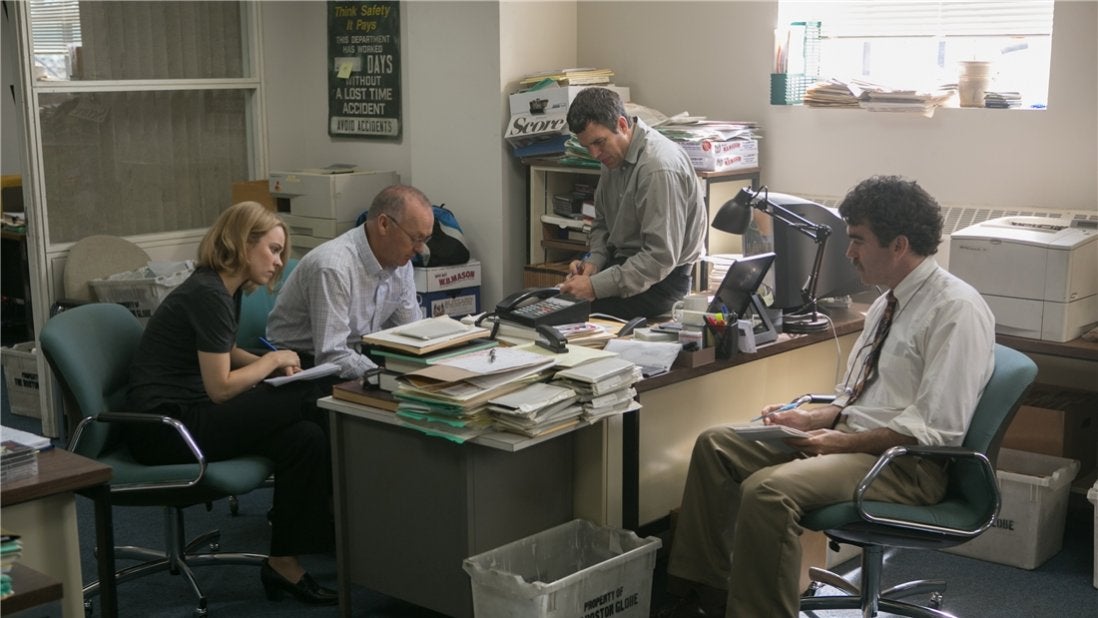 A JOURNALIST’S work, carried out onscreen by Rachel McAdams, Michael Keaton, Mark Ruffalo and Brian D’Arcy James, may not be the stuff great films are made of, but “Spotlight” begs to disagree.

‘Spotlight’: An ode to old-fashioned journalism

We fell hard for “Spotlight,” director-screenwriter McCarthy’s so-called “love letter to investigative journalism.” Days after the 88th Academy Awards telecast, we are still jubilant at its twin victories as Best Film and Best Original Screenplay.

At this writing, we’ve watched “Spotlight” six times. The film depicts the exposé on child sex abuse cases involving Catholic priests in Boston. Uncovering it all was Spotlight, the four-member investigative crew of the broadsheet The Boston Globe, which published over 600 related articles in 2002.

Each viewing has made us feel proud about being a newspaper employee in the age of fast news and listicles. The digital age has dubbed investigative journalists—or journalism in general—“old-fashioned,” “inflexible” and “stubborn,” yet these are the people who provide, to borrow the words of Boston Globe editor in chief Marty Baron in the film, “essential reading.”

Another way of interpreting old-fashioned is thoroughness; inflexibility as strict adherence to a journalist’s code of ethics; and bullheadedness as perseverance.

“Spotlight” has also strengthened the belief that one need not be in any specific profession or industry to be a good citizen, to be attentive and vigilant in addressing or participating in issues that beset the community, because it is just as easy to be apathetic and turn a deaf ear.

“Spotlight” is a great film because it is devoid of the theatrics of a commercial movie or a contrived indie drama.

The screenplay, cowritten by Josh Singer and McCarthy, makes you pay attention to what would otherwise be boring, mundane tasks. Reporters do a lot of walking, waiting, reading, note-taking, transcription, data analysis, not to mention running after unwilling subjects—stuff that don’t easily translate onscreen as interesting.

Considering the weight of the subject matter, there’s barely any melodrama. What the film has in abundance is a refreshing subtlety.

One particularly powerful scene involves the reporter Sacha Pfeiffer (Rachel McAdams), who has just ambush-interviewed a priest offender in his home. Shooed by the cleric’s sister off their porch, Sacha leaves in haste but stops short upon hearing children’s voices. Turning her head in the direction of the noise, she discovers that there’s a school only a few steps from the home of a child molester.

Setting the tone, literally, is two-time Oscar winner Howard Shore’s original film score. Shore, who worked on the music for “The Lord of the Rings” trilogy and another Oscar-nominated film, “The Aviator,” has created the perfect score for “Spotlight.”

The piano-heavy melody sets the tempo for the montages, including those of the research and investigation which would have otherwise looked dull and uninteresting. The music expresses depth and climax, minus the swelling and bravado often employed by dramas.

The most general description of “Spotlight” is that it is a fine piece of traditional filmmaking.