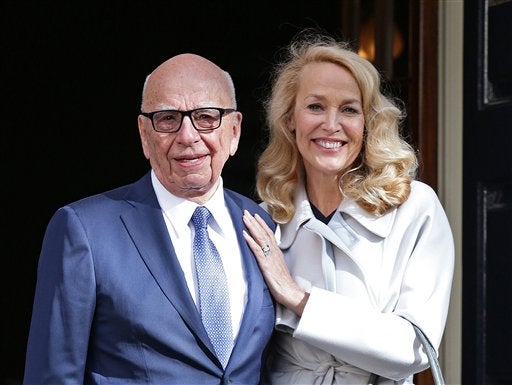 They were photographed emerging with smiles Friday from Spencer House, which was built in the 18th century by ancestors of the late Princess Diana. The 84-year-old groom wore a business suit; the bride, 59, was in a navy skirt and a trench coat.

Murdoch’s News U.K. confirmed Murdoch and Hall, who announced their engagement in January, had married.

Murdoch — a prolific tweeter on topics including British and American politics — tweeted: “No more tweets for ten days or ever! Feel like the luckiest AND happiest man in world.”

It is the fourth marriage for Murdoch, who owns Fox News Channel, movie studio Twenty-First Century Fox, publisher HarperCollins and newspapers in Britain and the United States. Murdoch has six children from his three previous marriages.

It is the first marriage for Texas-born Hall, a former supermodel and long-term partner of Rolling Stones singer Mick Jagger. She and Jagger, who have four children together, had an unofficial private Hindu marriage ceremony in Bali, Indonesia, in 1990. During divorce proceedings in 1999 a British court declared the marriage invalid.

Murdoch and Hall are due to hold a celebration ceremony Saturday at St. Bride’s, the “journalists’ church” in London’s Fleet Street.

Britain’s newspapers were based in Fleet Street until Murdoch moved his printing presses to east London in 1986 to escape the grip of the powerful printers’ unions. The rest of the print media soon followed, but the area remains the spiritual home of British journalism. TVJ

Rupert Murdoch gets the urge to merge (again)