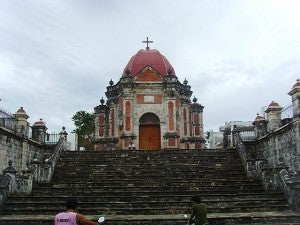 THE SPANISH-ERA Catholic cemetery of San Joaquin town in Iloilo, declared a National Cultural Treasure by the National Museum only last December, is again at the center of controversy after it was discovered treasure hunters had dug up a portion of the mortuary chapel with the permission of the parish priest.

Charges against Fr. Nelson Silvela and the diggers for violation of the National Heritage Law of 2009 will be filed, said the National Museum.
A statement from the office of Jaro Archbishop Angel Lagdameo said Father Silvela had taken an “indefinite leave of absence.”
Lagdameo has reportedly appointed Fr. Joenick Territorio, chancellor of the archdiocese, as parish administrator.

“Legal issues related to this unfortunate event shall be addressed in a proper forum and according to the demands of justice by those concerned,” the archdiocesan statement said.

The Jaro Church said it was committed to managing properly its cultural heritage.

“With due consideration to Republic Act 10066 (heritage law), the Office of the Archbishop, through the Archdiocesan Committee on Cultural Heritage, will continue to open its lines of communications with the National Museum and National Historical Institute (National Historical Commission of the Philippines) and to work with them in projects which have been authorized already by the bishop,” the statement said.

Last May, the cemetery figured in the national limelight when it was reported the road-widening project of the Department of Public Works and Highways threatened to destroy its perimeter wall. The wall was spared from demolition after local officials appealed to DPWH.

“It breaks my heart to see the illegal diggings inside the capilla (chapel) of the Campo Santo,” said Selibio. 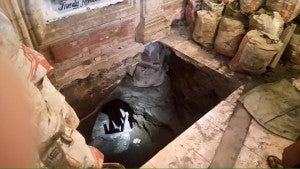 Selibio, who works at the National Commission for Culture and the Arts (NCCA), said he hoped those arrested would not be “treated as sacrificial lambs, and the brains behind the diggings shall surface and face the consequences of his actions in relation to Republic Act 10066 or the National Cultural Heritage Act of 2009.”

National Museum (NM) inspected the site last week and officials said the illegal excavation had damaged the chapel and destroyed the foundation of the north wall.

NCCA and NM will lead in the rehabilitation, he said.

Bautista, who heads NM’s cultural properties division, said the diggings were the “the worst incident” to have happened for a site or structure declared an NCT. He explained the structural integrity of the chapel had been “badly compromised.”

The camposanto, constructed in the 1880s, is the best-
preserved among Spanish-era cemeteries in Iloilo.
On December, the cemetery was declared by NM and NCT along with other Iloilo sites as Important Cultural Properties: Avanceña House or Camiña Balay nga Bato in Arevalo; Lizares-Gamboa Mansion (now the Angelicum School of the Dominican fathers) in Jaro; and Sornito house in Santa Barbara.