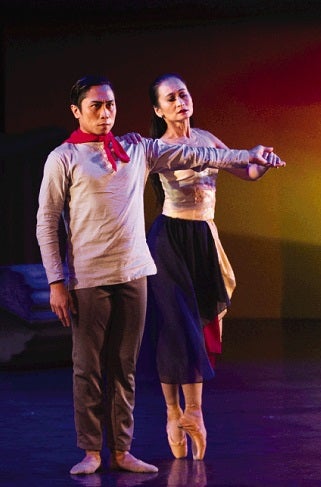 A BALLET about a gladiator combating an oppressive Roman ruler may seem arcane to Filipinos unless they follow “Spartacus,” the TV series. But British choreographer Martin Lawrence gave the ballet a modern Filipino spin, with characters in politically color-coded costumes such as President Ferdinand Marcos (red and blue), Ninoy Aquino (neutral suit) and Cory (yellow).

Ballet Manila artistic director Lisa Macuja-Elizalde had always wanted to stage “Spartacus,” a ballet about an enslaved gladiator who died fighting for freedom. So “Rebel” was staged as a homage to the 30th anniversary of the Edsa Revolution.

Companies worldwide have staged their versions, but the original and most famous was choreographed by Yuri Grigorovich. In typical mid-century ballet, it was characterized by melodrama. Its appeal lay in the pyrotechnics and testosterone-driven dancing.

“I’m sticking with Lisa’s vision. She wanted a modern-day ‘Spartacus,’” said Lawrence. “This is not a history lesson. It has certain flavors leading to the Edsa Revolution.”

Spartacus piloted the slave uprising against the Roman republic, against tyrannical oligarchy. In “Rebel,” he was translated into Ninoy Aquino (Rudy de Dios), the leader of the opposition movement. The intelligent and ambitious Roman leader Crassus was the equivalent of Marcos (Gerardo Francisco). Aegina was Crassus’ power-hungy consort who was the modern-day Imelda (Tiffany Chiang-Janolo) while Spartacus’ lover Phyrigia became Cory (Katherine Barkman.)

Aegina’s monologue about lust for power became Imelda’s solo, set to her famous renditions of “Feelings” and “Dahil Sa Iyo.” Crassus’ palace became Malacañang, symbolized by the carved chair with plush upholstery.
The choreographer used elements from “Spartacus” that ran parallel with the country’s struggle against dictatorship. Roman leader Crassus and his soldiers waged a war with prisoner-slaves, including Spartacus. “Rebel” interpreted it as a war between Marcos’ cronies and the opposition.

The brawl between Crassus and Spartacus became the clash between Marcos and Ninoy. The battle between the forces of Spartacus and the Roman soliders turned into the Edsa revolt. As in “Spartacus,” the protagonist died for his convictions. Spartacus was impaled by the soldiers: Aquino, in a bid to talk to Marcos, was shot by a still-unknown assassin. Nevertheless, “Rebel” ended on a high note with a united crusade and Cory being thrust into the limelight.

The choreographer interpreted the famous pas de deux of Spartacus and Phrygia into a tender duet between Ninoy and Cory with Juan and Inang Bayan. It even included the signature one-hand overhead lift. “Inang Bayan wants him back, but his love for Cory is strong. He turns to Juan to ask for strength. It’s abstract,” said Lawrance.

Lawrance took liberties of Aram Khachaturian’s dramatic score and interspersed it with patriotic songs such as “Bayan Ko” and “Handog ng Pilipino sa Mundo,” sung by Joanna Ampil. The integration of patriotic Filipino music not only made an emotional counterpoint but it brought the audience closer to the dance.

Lawrance adapted his contemporary dance style to the classically trained dancers. The style seemed balletic but it was crisp, angular and dense with a bit of lyricism. There were unexpected movements that threw the body center, releasing the body from the formalities of theatrical dancing. The style was characterized by abrupt changes or surprising contrasts in movement. The cast interpreted with physical and emotional heat.

The semi-retired Elizalde rebooted her dance career as an introspective yet dramatic Inang Bayan. The principals and soloists competently played out their roles.
Michael Divinagracia was the standout as the emotionally charged Juan del Cruz.

“Michael is very imaginative,” said Lawrence. “He can take the dance to where it makes sense. He’s great in the classics, modern and hiphop. That for me is very exciting.”

“Rebel” was a perfect showcase for the strength and machismo of the male corps and for modern dancers such as Francisco, who played a cold, stoic dictator.

BM remained true to its DNA of classics by updating a Soviet-era ballet into a relevant contemporary Filipino setting.

For people who were unfamiliar with “Spartacus” or millennials who were clueless about the martial law and Edsa revolution, they could identify with the universal plot: Two opposing factions were settled by one tragically losing out.

BM was no longer found wanting in production design.

For this production, the company pulled in a seasoned production team. Mio Infante designed the monolithic set which was a reference to the Greco-Roman architecture and “Imelda’s Pantheon,” according to Aquino.

The walls doubled as projectors showing a clip of Marcos’ famous Martial Law speech and images of Ninoy’s assassination and the Edsa revolt.

A veteran in lighting dances productions, Jay Aranda lit the scenes properly. His lighting design was seamless and didn’t call attention itself.

The suavity of the ABS-CBN Orchestra playing under the baton of conductor Gerard Salonga created the rirght atmosphere. A hit in Philippine Fashion Week, Jeffrey Rogador produced clean costume designs.
“Rebel” not only celebrated People Power but also a more progressive Ballet Manila.