Why, after 40 years of togetherness, we still decided to get married | Inquirer Lifestyle ❮ ❯ 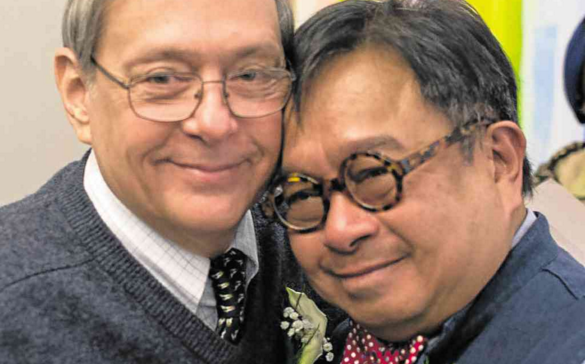 Why, after 40 years of togetherness, we still decided to get married

We were still jet-lagged from our 21-hour flight from tropical Manila to near-freezing New York, and it was now the morning we were to get married.

Jonathan was checking my bow-tie; I was still in a haze from lack of sleep. The prospect of getting married could make it hard to sleep.

We enjoyed a bachelor’s dinner with plenty of wine the night before in an intimate Italian restaurant near our Upper West Side hotel.

After nearly a lifetime together, we were still two bachelors celebrating their last night before getting hitched—to one another.

There was no rush; after all, it had been 40 years. Moments were now savored rather than hurried. We shared a sumptuous panna cotta.

I looked across the table and gazed at Jonathan and felt lucky that we were, in senior citizenship, still up and about, brains still functioning and, after such a lengthy engagement, had decided to take the plunge.

Notwithstanding our affection for each other, we decided to marry for the legal benefits that will now accrue, and, more importantly, for the respect and rights we will have under the laws in the US, Europe and elsewhere.

In the Philippines, the American embassy will recognize our marriage and, in the event that one of us winds up in a hospital or worse, the other will be recognized as closest next of kin and be privy to all major medical or financial decisions that may have to be made, an important factor at our age.

Years ago, I had a bitter family experience. A lesbian grand-aunt had a stroke and her sisters swooped into her life, took charge and transferred her to the province, never mind that she had a woman companion which the family knew had been her partner of 60 years.

The sisters hardly heeded the companion’s constant requests to see my grandaunt, and in the end, I believe, both died of broken hearts.

Sadly, their relationship was years ago, before there was even hope of a legally recognized gay marriage.

So it is with us. Though all our siblings love and respect our relationship, we just want iron-clad guarantees that one of us would be the guardian in a crisis.

The City Clerk we faced that morning was an older African-American woman. Having wedded countless people, she made sure that this ceremony, like all the others, was to be taken seriously.

There was an absence of sweetness in her voice; it was, instead, solemn and almost inquisitorial. It sounded like, “Do you really know what you’re getting into?”

American bureaucrats have figured it all out: To avoid awkward or sexist terminology for 21st-century weddings, they have reduced everything to the gender-free common denominator “spouse.” Following the order of our names on the marriage application, she looked me—Spouse A—in the eye first.

Scrutinizing me, the judge made some introductory remarks, but the tension of the moment completely erased any portent of her opening remarks.

A familiar refrain eventually arrived: Will you take Spouse B to love, cherish and care for until death do you part?

I couldn’t suppress a smile. My editorial vocation kicked in, thinking how all the things she had asked had been done, in the past tense, with some glitches, for the past four decades.

I answered feebly and then repeated it louder: I DO. I needed to hear my voice say the words, and for the witnesses and the judge to hear it. I had heard these words in many other weddings, not thinking that one day they would also be asked of me!

Jonathan (Spouse B) was the next, and he was more composed and answered ardently.

Rings were exchanged and the judge then asked us to hold hands and look each other in the eye for a good while, taking in what we had just vowed.

She then intoned, looking slightly to the ceiling, that with the power vested in her by the City and State of New York, we were now officially married and could kiss each other.

The simple room—called a chapel, though containing no religious images save for bound 19th-century marriage records displayed in glass cabinets—became blurry as tears flowed.

Jonathan was misty-eyed as well, and in the midst of this exhilarating joy I realized the marriage ritual’s significance. In front of witnesses, we declared a love and commitment—with society and the government affirming and legitimizing our right to love.

At that moment, there felt an emptiness in me, something I could not pinpoint until much later on in the day. It had to do with this wedding.

Though Jonathan and I thought it perfect to have it in New York where we first met and in City Hall where his own parents had married, we were actually being deprived of family and friends who would have eagerly attended.

But it wasn’t possible, given that same-sex marriage is not possible in the Philippines. Not yet.

The Philippine government, long beholden to the Catholic Church on most matters, finally took a defiant stand with much pushing from activists and passed a reproductive rights bill two years ago. This bodes well for legalizing domestic partnerships and eventually a same-sex marriage bill.

The Pew Research Report on global acceptance of homosexuality notes that an overwhelming number of Filipinos—73 percent—accepts homosexuality, in stark contrast to some neighboring countries which register single-digit acceptance, most prominently in Muslim-dominated countries.

It is worth noting that, despite being a Catholic country, the high acceptance figure places the Philippines in the category of secular and affluent states like the US, Australia and Japan that are accepting of homosexuals.

The polls show that even more young Filipinos accept homosexual relationships, a note of optimism for their future voting preferences.

Pope Francis’ explosive question about gays (“Who am I to judge?”) just several months after ascending the papacy was a jolt to the Catholic hierarchy. Although he faces a phalanx of conservative cardinals chosen by his predecessors, he will push for more inclusion of gays and women in the Church and reforms as far as he can gain consensus.

For now, gay marriage is not in the cards, along with female priests, divorce or communion for single parents—but changes are beginning.

In 2015 the American Supreme Court ruled same-sex marriage legal in all American states. The signal sent across the world was that the separation of Church and state was paramount.

Despite religious misgivings and doctrinal dictates, all officials are obligated to give each citizen equal protection under the law and the right to define their own “families” and live happily and honestly.

We were only five at our wedding “reception.” Three were our witnesses. Being right next door to New York’s Chinatown, we headed for the best Peking duck restaurant there.

We had a wonderful array of Chinese dishes and I was grateful to my witnesses for having taken time off from work to attend our important event.

But midway through the lunch, I thought of all my loved ones and friends in the Philippines who I wished were there, too.

I thought of my and Jonathan’s departed parents and relatives who would have joined us this day, and the two friends who introduced us way back in 1975.

Among them would have been my grandaunt who was separated from her partner because she was gay and could not marry.

Until we have voters, legislators and judges who will stand up to religious bullies who disregard the constitutional separation of Church and state, and until we have a president supportive of same-sex marriage, those of us fortunate enough to travel will continue to marry abroad, as many of our Filipino friends are now doing.

Hardworking gay Filipinos and their families need the full support and protection of their own government regarding issues of marriage, immigration and dual citizenship.

I’ve lived with Jonathan 40 wonderful years, while asserting, writing and marching for the rights of gay people to marry and live openly.

The struggle has not come to fruition here in the Philippines where I was born, but I’m confident this tolerant and naturally inclusive country will one day make marriage equality and equal protection under the law available to everyone.