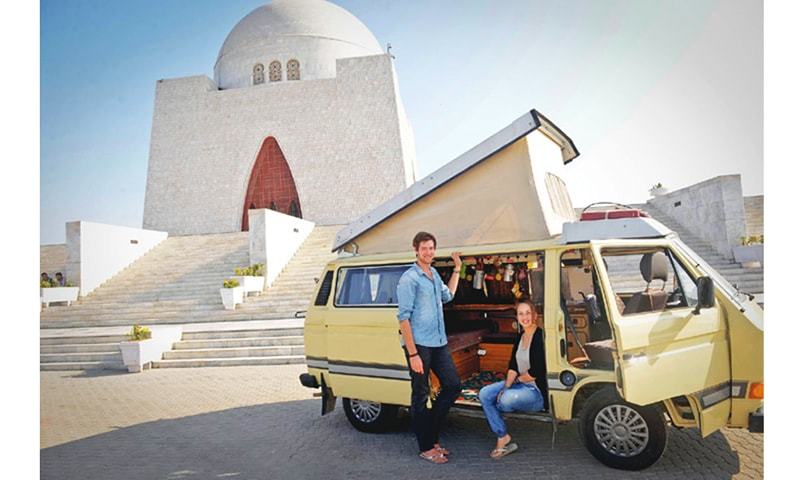 Christian Nieth and Elisabeth Hartmann, who have travelled thousands of kilometres from Germany in their Volkswagen camper, at the mausoleum of the Quaid-i-Azam in Karachi on Friday. Fahim Siddiqi / White Star

From Germany, with love

Borders may be well-defined, but once in a while we hear of epic journeys that help blur them just a little. The drive to Pakistan by German nationals Christian Nieth and Elisabeth Hartmann, over dusty, unpaved roads and through corrupt bureaucratic frameworks, is one tale worthy of mention in this regard.

They sold their apartment, leaving behind high-powered jobs and concerned family and friends to experience the world, the gritty and honest version of it. Taking the road, they decided, was the best way forward.

So they embarked on a road trip to countries including Russia and China. However, the weather had other plans and back to the drawing board they went. Iran seemed like a good option. Plans were made to ferry their prized possession — the Volkswagen T3 Camper 1981 Westfalia — all the way to India for the remaining part of the journey. Pakistan was to be bypassed completely. Instead, they decided to traverse neighboring countries that enjoy a more positive image internationally.

Two chance meetings changed their plans, though, and brought them here.

A hitchhiker they met in Turkey, a usual occurrence on the road, was among the few to have waxed lyrical about Pakistan. “He called it one of the most beautiful countries he had ever travelled through,” says Chris. “This greatly piqued our interest and we decided to add Pakistan to the list.”

Their decision was further cemented after a meeting with the Motor Club of Pakistan whose members had embarked on an international road trip across three states — from Pakistan, through Iran to Turkey and back.

“We were in Zahedan, Iran, when we first met the team. We had applied for a visa for Pakistan but getting it from a foreign country was becoming impossible as we needed to apply from our country of origin. But then Razi Nayyer, president of the Motor Club of Pakistan, took responsibility for completing our paperwork,” Chris explains.

Not that the job became any easier. The lack of efficiency in bureaucratic handling, and a discriminatory attitude towards foreigners, slowed down the process. It was only after the highest echelons of the military and the federal government were approached by Nayyer that success seemed possible.

Elisabeth recalls how “from the first day of us trying to get a visa on our own, to the day we physically had it in our hands, took around two and a half months.”

And finally the two could officially enter our paradoxical country.

When crossing the border into Pakistan from Iran, there seemed to be a paradigm shift in almost every facet, they say. “Everything from black and grey turned to pink and green,” muses Elisabeth. “Pakistan was more colourful. And not just that, the hospitality was overwhelming.”

But this epic journey was not just shared between the two. Who can forget the Volkswagen camper — their one steady companion, their home as well as their getaway car, the one constant in their lives as they crossed borders, walked among strangers, made friends and explored strange lands.

Humble in its visage on the outside, it is a treasure trove from within. It has running water, a small refrigerator, an electric point, a stove, and enough room to house four; the five-square-meter camper is the nucleus of Chris and Elisabeth’s lives.

Affectionately named ‘Bulli’, “ … the camper is like a hippy car,” says Chris, “like something out of Scooby-Doo.” So far, they have travelled about 15,000km in it, with thousands more to go.

Bahawalpur is their next destination, after which they will head to Islamabad to renew their visas. After spending a few weeks in the mountains, Chris and Elisabeth will then head back to Lahore and cross into India.

Speaking about the mechanics of living on the road, interesting anecdotes come up. The two offered their camper to couch surfers and so had a lot of travellers with them on the road. “It’s always interesting to meet new characters, hear new stories and make new friends,” observes Chris. Elisabeth adds that “one day when in Iran we finally decided to get away, we drove 20 miles into the desert, shut down the car and just spent time by ourselves.”

“Travelling together shows you every side of the person you are with,” muses Elisabeth. “This trip has taught me that putting yourself first is something very European; there is a need to throw that overboard, and put others first as it helps you work better as a community.”

“Owning less is fun,” pipes in Chris. “Having all our belongings in this car made me realise you don’t need much money or space. The most valuable things are time and freedom.”

Within the confines of the camper, among the many items that make up their home is a small postcard of a dejected figure under a thunderous cloud that does not cease its pouring. Beneath it in German is written Willkommen im Leben, which in translation roughly means ‘Welcome to life’. Both Chris and Elisabeth consider this a constant reminder that on the road, with the good moments come bad ones, but what matters is the journey.

The best people to travel with

Basic reminders when preparing for a long road trip