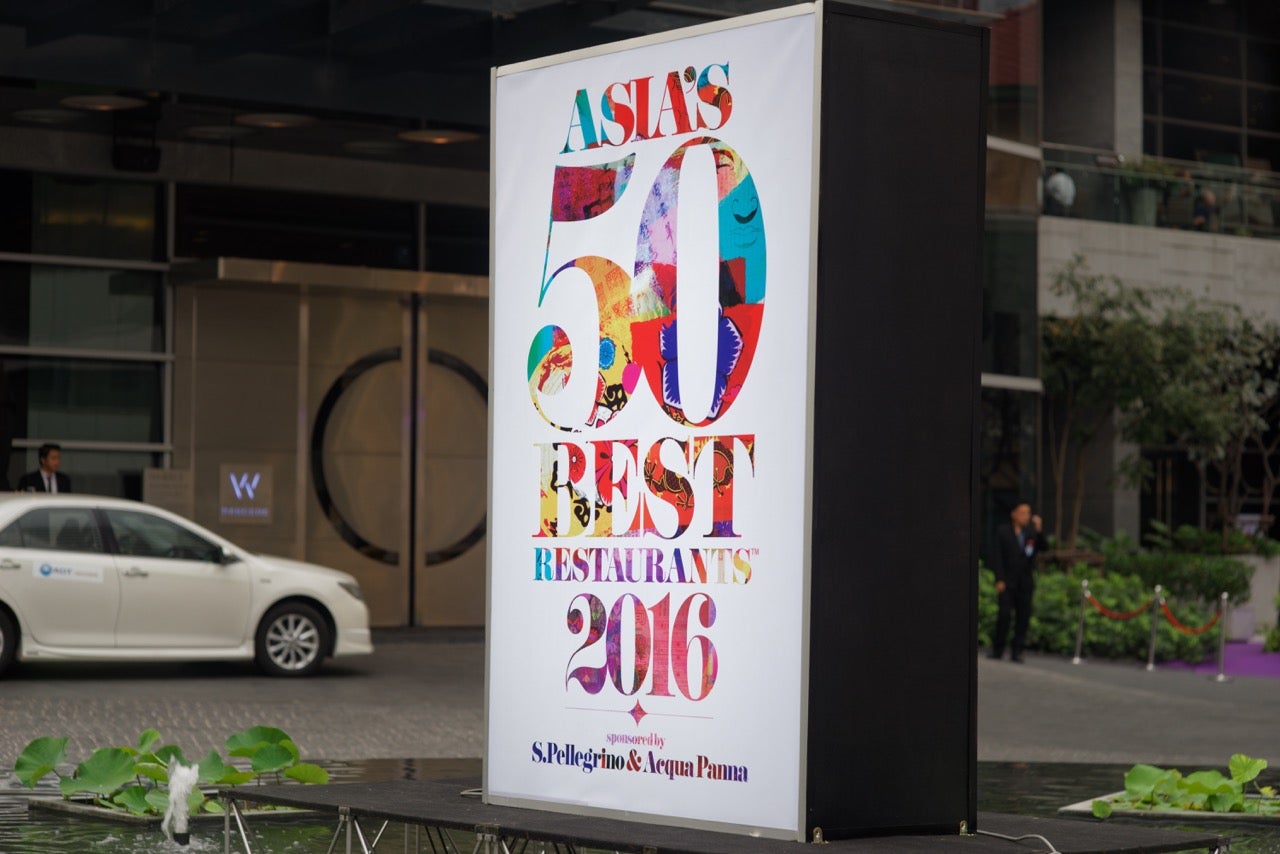 AWARDING night at the W Hotel

Superstars of the food world feted at annual awards

The awarding ceremony of Asia’s 50 Best Restaurants in Bangkok was full of snazz and razzmatazz.

Excitement had built up from a few days earlier, when the media started streaming into W Hotel with iPhones and cameras at the ready, and a few chefs skulking about.

Chefs tend to be barely recognizable outside of their kitchen whites, tending to be shy and reclusive.

Not us, says William Reed Media, the institution behind the World’s 50 Best Restaurants list.

The sponsors don’t have a say either, even as the term “World’s 50 Best” carries “sponsored by San Pellegrino and Acqua Panna.”

A body of about 300 judges votes for the restaurants; after their votes have been tallied under the watchful eye of Deloitte (a British auditing firm now based in New York), the Top 50 restaurants are declared winners.

And since no one knows the identities of the judges either (they must conceal their appointment), this leads to a kind of paranoid McCarthyism in the food community, in which we all suspect each other of secretly being a judge.

Like Deloitte or Sotheby’s or Carr’s table water biscuits, the 50 Best lists are a great British export. Originally part of a London-based trade magazine’s ranking, the list has long surpassed the Michelin Guides in its influence, especially in most parts of Asia and Latin America.

In theory, any Asian magazine could have assembled a supersecret list of judges to vote for the winners, but what William Reed Media is selling— and what San Pellegrino and the rest of the sponsors are buying, by providing financial support—are legitimacy and authority.

Critics might carp and whine about the incommensurate power wielded by the list, but as long as people believe in it (and I was surprised last weekend by the extent to which people did), its influence will continue to grow.

The list has been accused of being overly influenced by restaurants’ PR teams and by passing fads.

“It’s a snapshot each year of what’s going on in the gastronomic scene,” says William Drew, group editor of William Reed Business Media. “So, of course it’s going to change—it would be very boring if it didn’t. However, I don’t think it reflects short-term fads. But it does reflect medium- and long-term shifts in the industry, such as the casualization of dining … what used to be called ‘fine dining’ has fundamentally changed.”

‘Oscars’ of the food world

The other accusation regularly laid at the door of the World’s 50 Best (though this same charge has been leveled, for years, at Michelin) is that it’s mostly about celebrity rather than about food, and of hyping and glamorizing the restaurant scene.

“I don’t really see that as criticism,” says Drew. “I think most chefs and restaurateurs work extremely hard. And if one or two nights of the year they can have an exciting celebration, they deserve it. If people call us the Oscars of the food world, we’d be very happy about that … though it might not be as much of a red-carpet event.”

A casual observer might have been fooled. The arrival of each chef, as well as of the various dignitaries invited to the ceremony, was heralded by hordes of paparazzi snapping away as the guests of honor walked on a mauve to purplish carpet to a photo wall emblazoned with the names of the sponsors.

Apart from Asia’s Best Female Chef, which a Filipino, Margarita Forés, won, there is a growing number of awards, including those for “Highest New Entry,” “Highest Climber” and “The One to Watch.” Each of these had its respective sponsor.

At the afterparty, a DJ spun beats while perfectly aged cheeses and air-flown French oysters, including some transcendentally plump Tsarkaya, joined David Thompson’s crab curry and booths serving grilled wagyu and a seemingly endless flow of Robert Mondavi wines. As one who benefited from and enjoyed the hospitality, it seemed churlish to complain.

My personal opinion, however, is that the spin-off awards, sponsorships and commercialism have reached their peak. It’s OK at the moment, but add any more and the whole construct will crumble under the weight of its own baubles.

Fourteen years on, the 50 Best lists are immensely lucrative for William Reed Media and is no doubt a godsend for a 150-year-old trade publishing house in the current magazine environment. The event feeds off and creates the hype for celebrity chefs and new restaurants in a virtuous cycle, all part of the food-obsessed world of cooking shows, rankings and culinary tourism.

For the moment, especially in the developing world, it does more good than harm, even if it is not without its issues. The appetite for glamour in the food and restaurant scene shows no sign of abating, and if the outfit that runs the 50 Best Restaurants list doesn’t overplay its hand, it will—for better or for worse—continue to dominate that world.