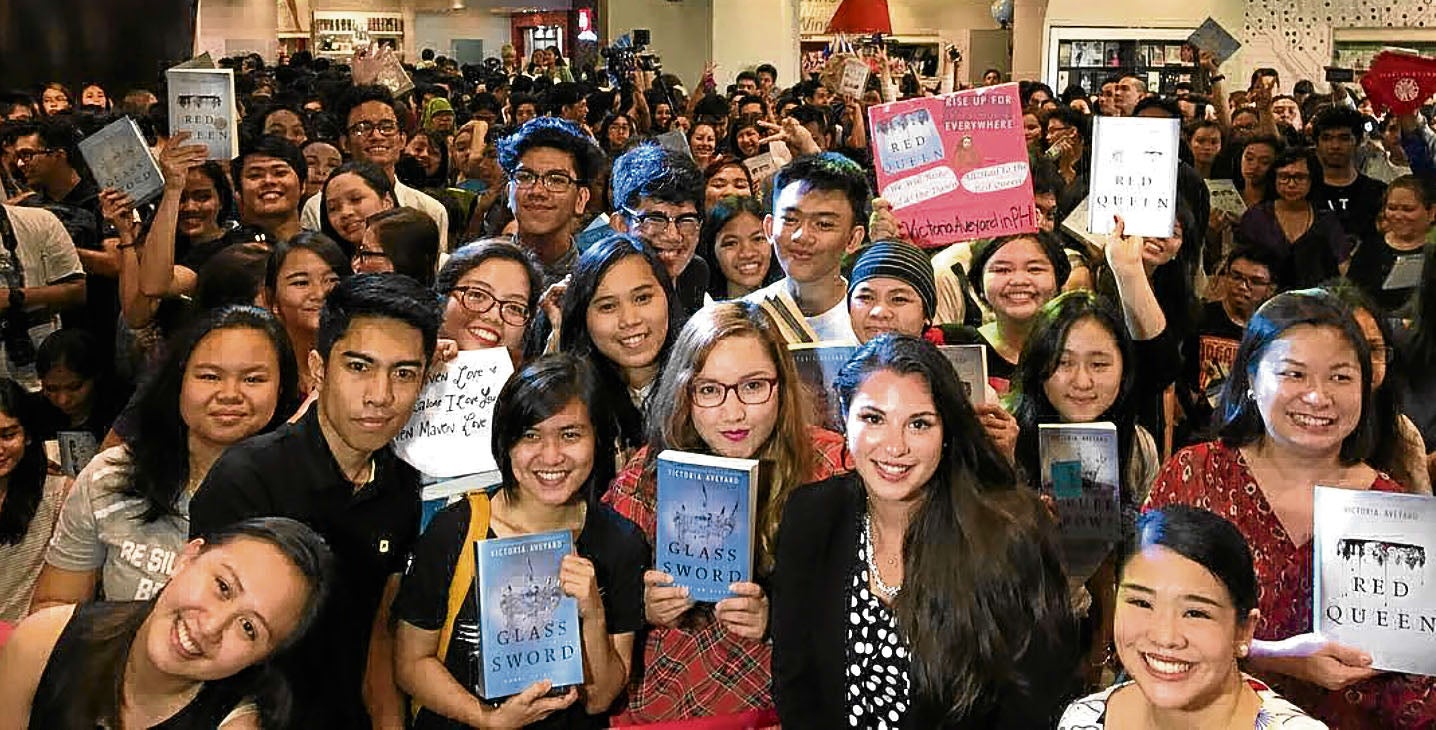 Why ‘Team Maven’ just ain’t happening, according to Victoria Aveyard 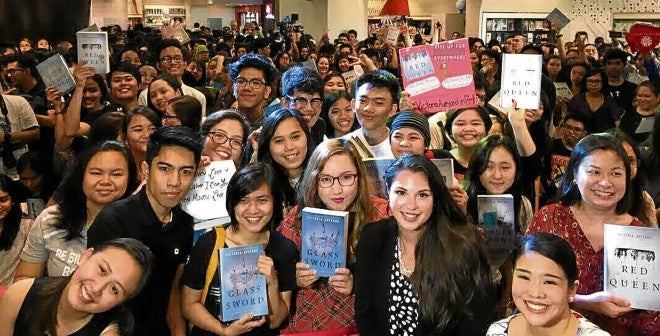 I just had a mango juice for breakfast, but I really want one again. I really shouldn’t,” says author Victoria Aveyard.

Victoria was flown in by National Book Store last weekend for a book signing event in Manila and Cebu. Her popularity rose with the release of her first novel, “Red Queen”—a young adult (YA) fantasy series about the struggle between the Silvers, an elite monarchy ruled by people with superhuman abilities, and the Reds, commoners with no abilities and therefore powerless to fight against slavery.

In the first book, a young Red named Mare Barrow finds herself in possession of a powerful superhuman ability never seen before. This discovery is the spark that inspires the oppressed to rebel against the Silvers.

The second book “Glass Sword” has just been released, and a film adaptation of “Red Queen” is underway with actor Elizabeth Banks as director.

We are a few minutes into our interview with Victoria when she pauses.

“Could I please get a mango juice?” she asks a passing waitress at Writer’s Bar in Raffles Makati. “It’s so good,” she says with a sheepish grin.

We totally understand the compulsion. After all, that was how we felt when we read “Red Queen.” It was so good that if the entire series was already out, we probably wouldn’t be heard from until we got to the very last page.

Upon learning that she was coming to Manila right after “Glass Sword,” we were super excited because it meant we could beg her for spoilers for the third book. But Victoria was as impenetrable as Silent Stone.

You sold the screenplay and the book deal almost simultaneously. How did that happen?

Hollywood has noticed that adaptations usually do very well because of the built-in audience. It’s always keeping an eye out in the publishing world.

In my experience, because I was coming from the film side, there was already a bit of attention; my team knew what they were looking for, so we were coordinating with Harper Collins, and at the same time shopping the manuscript to different studios.

You’re a screenwriter and a novelist. How are the two disciplines different?

In publishing, you’re with the book all the way until the end, and then even now when it’s out, you’re still going on tour for it and interacting with fans.

Once you write a screenplay, unless you are working very closely on it, it’s kind of, you get paid, you step away, just because there are so many pieces in a movie. I like writing big action movies, so those usually have a lot of moving pieces.

With novels, obviously you get so much more room and time with your characters and you can build so much more, I feel.

For a screenplay, you’re limited to about 120 pages. If you’re writing an original screenplay, you want to get the story done, you have to be very direct and concise in your language; your pacing must be phenomenal.

Then when I’m on the prose writing side, it’s really great to delve into your character’s head, which I miss when I write screenplays. But I also miss the fact that I can write a scene in just three sentences on a screenplay, but in a book it’s a whole chapter.

When I started “Red Queen,” it was hard because one of the things I did really badly in the book was describe characters, because when you’re writing screenplays, you’re not supposed to describe physical things too closely because you want a reader to imagine whatever actor they want.

How far is the “Red Queen” movie, production-wise?

We have a writer, director and studio that’s really excited, and the books are doing well, so for us, everything we need to be happening is happening.

They’re really excited to do justice to the book, which is more than I can ask for. They had me read the script, and they’re great at keeping me in the loop, letting me know when they want my opinion and all of us being collaborative.

I’ve met Elizabeth Banks; she knows exactly what she’s doing. I love that our main executive is a woman, and our writer is a woman: Jennifer Hutchinson, she’s done the first drafts so far, she used to write for “Breaking Bad,” she writes for “Better Call Saul” now. We have three power women in key creative roles, which is awesome. And very rare.

What’s it like working with Elizabeth Banks as director?

Elizabeth knows the YA atmosphere, understands what fans appreciate, and how to adapt something but also keep the spirit of the original.

Why did you choose not to write the screenplay for “Red Queen”?

I had only just finished “Red Queen,” and I would have been way too close to it to do it justice. I wouldn’t have been able to cut anything, combine characters or change scenes—we would’ve had a screenplay that’s way too long, it would’ve been bad. I’m glad I didn’t have to take first crack at it. 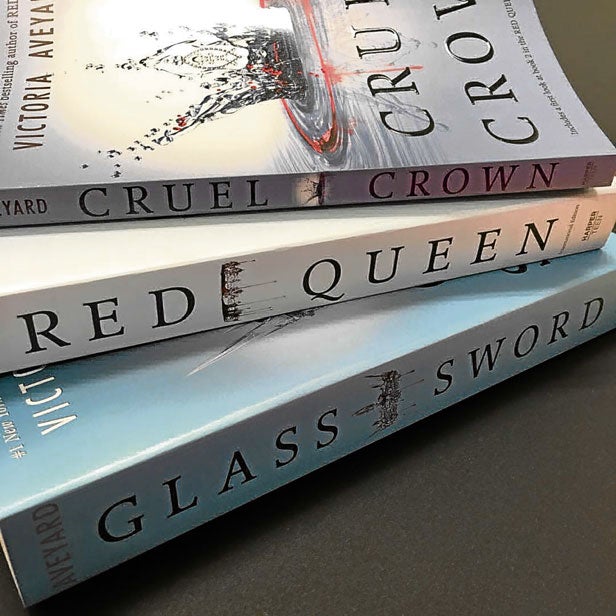 We’re dying to know what happens in the third book.

I’m still writing the third book. It picks up exactly where the second one leaves off; we start off with that scene. Obviously, one character who wasn’t in the second book that much is very much in the third book, and I’ve also added another point of view. It’s not just Mare, because clearly Mare has been removed from a lot of pieces of the story, so I needed another eye on what’s going on with the rest of the people.

We were surprised you killed off who we thought was going to be the main villain in the story.

Yes. It happened very quickly and that’s because we’re going to go back to it in the third book, so you get to see a little bit more of that.

Mare is my number one favorite. If she wasn’t, I wouldn’t have written the book from her perspective; I would be so annoyed by her! I really love her and feel really bad for her. Sometimes I go, like, “I’m sorry I’m doing this to you.”

My second favorite is definitely Maven, because he is so complex. I have to really work and understand where he’s coming from. We’re going to get a deeper look into his past.

But of course there’s no such thing as a Mare and Maven thing, right?

A lot of people are very “Team Maven” and love him, want him redeemed; they want Mare to fix him, and I was really taken aback by that reaction because it’s not at all something I support or want to see. But at the same time I don’t hate him. I understand why he is the way he is, and that’s why I want people to do that, too.

I would probably pick Queen Elara’s. I want to be a Whisper and control minds and listen to thoughts, just because I think that’s the best defensive one, although I’d get really annoyed having to listen to what everyone’s thinking. But if I had to pick any superpower, I would definitely go with time travel because I am a history nerd.

Will there be a time traveler in the series?

No. There’s actually an alternate ending to the first book that was released in a special edition. It’s cool, there was a time traveler, but we took it out because the ending was too weird. Even for “Red Queen,” it was one step too far, and my agent was dead-on when she said, “Can you change this?” She was so right, and I realized I don’t want to deal with time travel, it’s just too confusing.

What was your first splurge after learning about the book deal?

After the book deal you don’t get paid for a little while. They send you the offer and you have to wait for the contract to be drawn up, go through it and negotiate so there’s a little bit of back and forth. It takes a few weeks for everything to get released, so there were a couple of months when it was hilarious because I thought, “I have this big book deal and I’m broke.”

Luckily my parents were, “We know you’re good for the money, we’ll loan you some living money while you’re home.”

The first thing I bought was a car. There were three things I really wanted: a car; a nice desk, because I wrote the entirety of “Red Queen” hunched over a coffee table; and a new pair of glasses. I really dreamed big (laughs), and I got all those things, so I’m very happy.