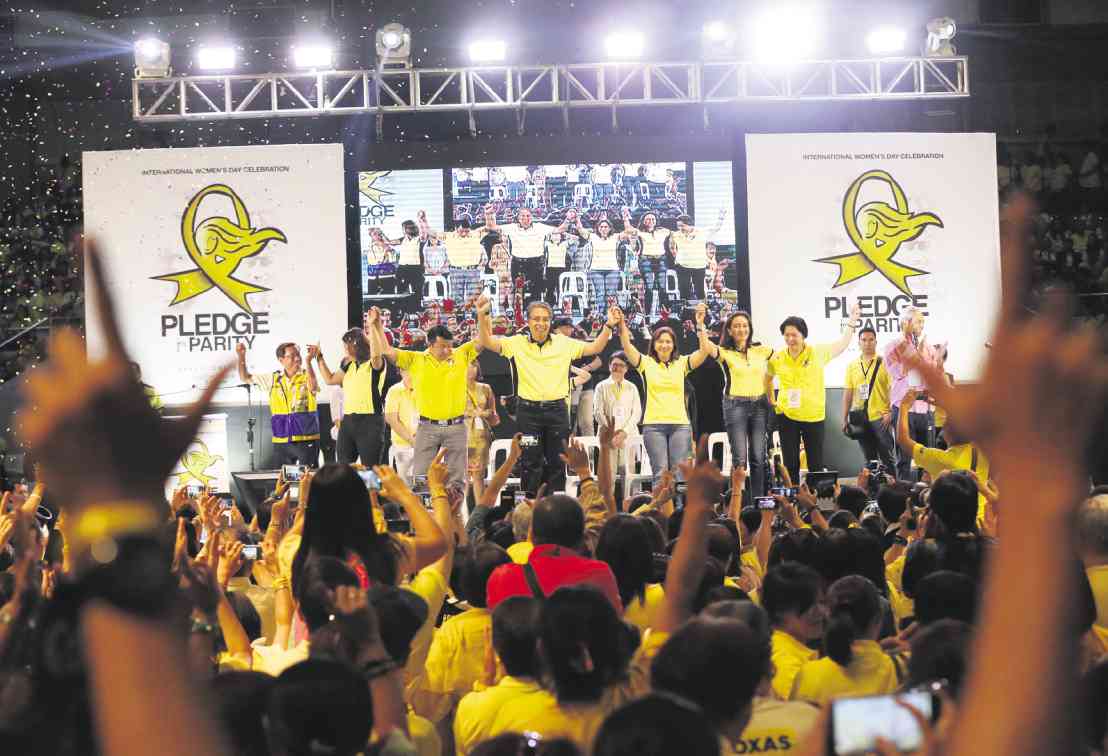 Who’s campaigning for whom?

As election day draws nearer, it gets more and more interesting to watch who is campaigning for whom.

In political campaigns, candidates can widen their spheres of influence and get votes through volunteers. These volunteers are motivated by either friendship or belief in a cause.

The volunteers for Grace Poe and Vice President Jejomar Binay are good examples of “relational marketing.”

Although Binay has a coterie of businessmen and lawyers, there are individuals and groups who support him because of their ties to his wife, Dra. Elenita “Ellen” Binay.

Former beauty queen Nenita “Nini” Licaros is a family friend and a wedding sponsor to the Binay children. A councilor from 1992 to ’95 during Binay’s term, she recalls how his constituents benefited from socialized services, such as the Ospital ng Makati and free education, and the affluence of the city.

As a former “Mare,” or member of Dra. Luisa Ejercito’s volunteer group, Licaros can’t help but compare the styles of the political spouses.

While Ejercito and the Mare followed a hectic schedule of activities during Joseph Estrada’s bid for the presidency and as Manila mayor, Dra. Binay keeps a low profile in her husband’s events. “She neither imposes on people nor asks for favors,” says Licaros. “She’s embarrassed to do so.”

Still, people close to Dra. Binay would attend the campaign sorties. There have been informal meetings on how to increase volunteer power and how to parry the blows when criticisms are hurled against the Vice President.

Licaros clarifies she is not always aware of the campaign schedules. “Ellen is considerate. She understands our priorities,” she says.

Licaros has organized a merienda to motivate friends to be on Binay’s side, and has tried to persuade her employees, household staffers and relatives.

“Let the professionals do the campaigning. We are basically Ellen’s friends who are there to help her,” says Licaros.

Team GP (Grace Poe) is composed of Poe’s schoolmates from Assumption San Lorenzo high school, University of the Philippines Manila, and colleagues from the Movie and Television Review and Classification Board. It has been giving her moral support since Poe’s senatorial bid.

Restaurateur Malu Gamboa was Poe’s classmate at Assumption. They kept their friendship while Poe studied at Boston College and Gamboa was enrolled at Boston University. Gamboa is also the godmother of Poe’s eldest, Brian Llamanzares.

“Through the years, we have seen Grace as intelligent, morally upright, respectful to her parents, and she has kept a solid family life. She’s not ambitious for power and wealth. She’s a doer and is secure in being a mother and a woman,” says Gamboa.

The 40-member Team GP has a structure. Kitty Jacinto, Joanna Duarte, Lia Lesaca, Manet Dayrit and Menchit Fajardo comprise the campaign materials committee which produces T-shirts, fans, caps and aprons that are distributed in the sorties.

“When we get together, we see what Grace needs and see how we can lighten things up for her,” says Gamboa.

For some volunteers, helping in a presidential campaign is a chance to help effect change in government.

Growing up in the martial law years, they were accustomed to a leader with a powerful personality. “We felt more secure then,” he recalls.

These friends create the Duterte buzz through their social media groups on Facetime, Viber and Facebook, and organize events such as a fundraising dinner.

Manalo maintains that his group’s involvement is not self-serving: “Our businesses will not benefit if Duterte gets elected.”

Having lived in France as a student at the Ecole de la Chambre Syndicale de la Couture Parisienne, Manalo was exposed to a socialist society. He believes that Duterte’s socialism would bridge the gap between the rich and poor.

“He’s the only candidate who has an egalitarian platform. Most of the governments we’ve had since 1986 were pro-rich. Duterte’s principles of socialism can help uplift the lives of the oppressed majority, while his federalism will distribute power in the provinces,” says Manalo.

Entrepreneur Frannie Aguinaldo Jacinto recalls the halcyon days of Davao in the mid-20th century, when the Aguinaldo family owned a pearl farm in Samal, as well as logging and piggery industries. The province’s economy took a downturn due to lack of peace and order.

“It was a killing fields then. Duterte cleaned it up when he became mayor. Davao is clean and orderly now. Duterte is not corrupt. You get your business papers within three days. He lives in a simple house to this day, unlike in Makati under Binay, where red tape was the name of the game,” says Jacinto.

Jacinto met Duterte during a campaign at Manila Polo Club and was impressed with his idealism.

Jacinto says many blue-collar workers are rooting for Duterte, hoping that his election would abolish crime and drug abuse. They were surprised that the elite was rooting for him as well.

“The rich and the poor like him,” she says.

With her background in both government and NGOs, Victoria Garchitorena makes a powerful activist. The league convenor of the Yes to Mar and Leni 2016 group has been going around the country, educating the public on Mar Roxas’ achievements.

“We’re a nonconventional group. It means that we’re not Liberal Party or any political structure. Most of us come from civil society—Karina David, Mariel Tolentino and Edsa babies,” says Garchitorena.

She first met Roxas when she was executive director of Ayala Foundation Inc. (AFI), the social development arm of Ayala Corp.

Roxas, then Trade Secretary, acquired 30,000 computers from Japan and distributed them to 2,000 public schools through AFI’s Gilas (Gearing Up Internet Literacy and Access for Students). His influence brought up a new generation of computer-literate children from the underprivileged group.

“People don’t know that Mar raised the standards in our shipping industry. He got our seafarers on the international shipping list,” she says.

“He’s the most qualified of all the candidates. In his 20 years of government service, there hasn’t been a whiff of corruption. He will continue the legacy of P-Noy, who brought tremendous economic reforms.”

Garchitorena was impressed with the humility of Rep. Leni Robredo, who worked very quietly in her hometown, Naga City.

One of the plans was to replicate the vision of Robredo’s late husband, Jesse, former Naga mayor and Interior Secretary. When he was mayor, Jesse promoted empowerment among his constituents. “We were thinking of replicating that in 13 municipalities,” says Garchitorena.