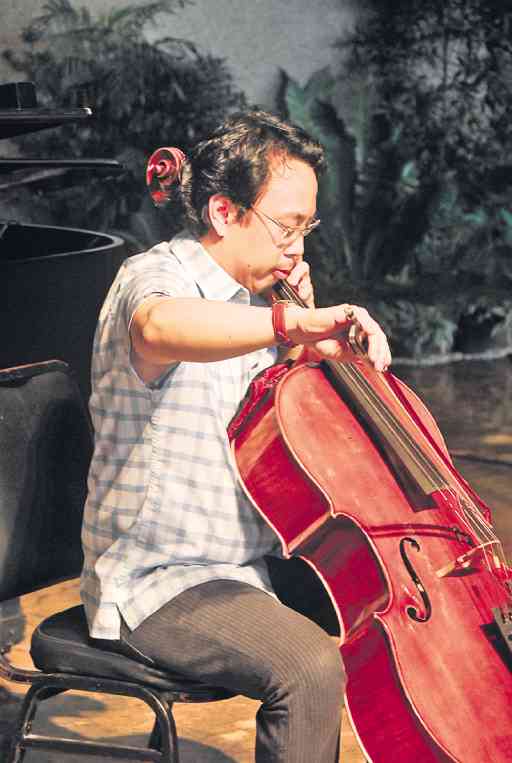 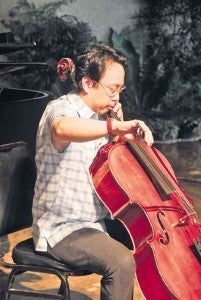 MANILA, Philippines—The most memorable thing about the press con announcing the opening season concert of the Manila Symphony Orchestra at the CCP main theater on June 4, 8 p.m., is the special number rendered by cellist Wilfredo C. Pasamba.

Playing Rachmaninoff’s “Vocalise” on a cello made in Chicago by renowned violinmaker Cison Bronek in 2001, Pasamba unearthed a wealth of sounds that were at once focused and gradually rich and impeccable as he went on. It did not matter that the pianist, Beah Bumarang, did not match those lines; his tone dominated everything in the CCP Main Theater lobby.

The cello is back, and a Filipino finalist at the Tchaikovsky Competition will once again render Haydn’s “Cello Concerto No. 2 in D Major” with the Manila Symphony under the baton of Arturo Molina.

Pasamba just came from Moscow where he had an invitation from the Moscow Conservatory, and where he studied some years back. It was the same school where pianist Rowena Arrieta made her mark in the 1980s and became the first Filipino laureate (5th place) of the Tchaikovsky Competition.

On top of performing, the Filipino cellist also gave master classes at the Moscow Conservatory, which he found a very challenging and fruitful experience.

“I taught and gave cello lessons, chamber-music and orchestral-studies repertoire. Russian student cellists are no doubt very serious music students, and they really excel in their instrument with their habit of daily long hours of practice.”

How he managed to handle a class of Russian student he summed up in one secret: One must have good communication skills in Russian language and, of course, proficiency in speaking.

Pasamba has performed three times in Moscow, the latest being at the Rachmaninoff Hall, where he did a program of Barber, Debussy and Shostakovich cello sonatas. Earlier, he performed at the Sviatoslav Richter Museum and at the Pushkin State Museum.

“Russia has always been a great place to study and make music. It has a very strong musical tradition with so many outstanding soloists, chamber music groups and symphonic orchestras.”

Hailed by the New York Times for his “audacity and brilliance,” Pasamba had the advantage of being schooled in Moscow and New York and getting the best from both.

Says he: “The Russian school gave me a good technical and musical foundation and the importance of daily practice. The American school enhanced my musicianship and freedom for musical expression.”

Pasamba’s latest performances include guest solo appearances at the Heidelberg New Music Festival, performing the music of George Crumb, and at the Olivier Messiaen Centennial in Missouri; a collaboration in the Arnold Schoenberg Retrospective at the University of Missouri-Kansas City; and a chamber-music appearance with the Omaha Chamber Music Society; and guest solo recitals in San Francisco, Moscow and St. Petersburg.

He cites the advantage of being soloist and chamber musician at the same time: “Playing chamber music helps me to be more sensitive to the sound of different instruments. It helps me create harmonious musical ideas and develop rapport with other musicians.”

Pasamba has lately served as a faculty member at Pittsburg State University and at the University of Missouri-Kansas City Conservatory.

He likes to think that teaching and performing complement one another. “I think teachers would be more effective if they are also performing. Explaining certain technical and musical problems and demonstrating it by performance contribute to a better understanding and even mastery of the subject.”

In the company of other good Filipino cellists like Renato Lucas and Victor Michael Coo, Pasamba says he remains in good shape as a cellist by doing the basic things.

“I make it a point to practice every day, have a good sleep, a regular intake of healthy food, and of course, daily exercise.”

He has played the Haydn “D Major Cello Concerto” a few times and its challenge remains the same to him.

“This concerto is considered one of the most difficult and challenging pieces in the entire cello repertoire. It is also a favorite of many cellists. I think the biggest challenge of this piece is that it needs to sound effortless without being too romantic.”

After his CCP engagement, Pasamba and pianist Mary Anne Espina will grace the Balay Kalinaw Intimate Concert Series on July 8.

The other artists in the series are pianist Oliver Salonga on June 18, and baritone Andrew Fernando and Christopher Oracion on July 22.