Mystery of Manoppello: The finding of the ‘Veil of Veronica’ | Inquirer Lifestyle ❮ ❯ 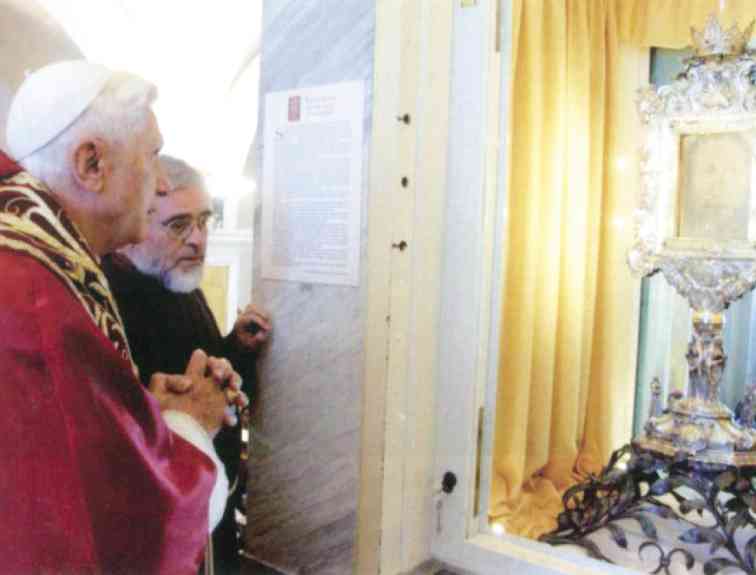 POPE Benedict XVI in September 2006 visiting Manoppello and praying before the Sudarium that holds the Volto Santo or Holy Face of Christ.

Mystery of Manoppello: The finding of the ‘Veil of Veronica’

Only a year into his pontificate and half into the first decade of the new century, Pope Benedict XVI made a pilgrimage of a little known church under the Franciscan Capuchins in the Apennine mountains, in the town of Manoppello in the Abruzzo region of central Italy, some 157 km from Rome.

There, on Sept. 1, 2006, he came face to face with the town’s most cherished relic—the “Volto Santo” or Holy Face—more popularly called, albeit erroneously, as the “Veil of Veronica.”

The papal visit was the culmination of a series of events since the Jubilee at the close of the second millennium when it was announced in 1999 that the Veil, suspected to have been long gone from the Vatican treasury, had been found.

But even experts on “acheiropoieta,” that is, “icons not made by human hands,” had frowned on the news, particularly sindonologists or experts on the Shroud of Turin.

A full century earlier, in 1898, lawyer Secondo Pio, an amateur photographer, had been asked by the Turin Cathedral to take photos of its most controversial possession. It was supposed to be a final documentation of the ancient fabric. Church authorities had decided to lock up this particular item of acheropoeita and remove it from public regard or veneration, since it apparently had no place in the dawning century of science and modern thinking.

It was the first time that electric lights were trained at the linen cloth. When Pio went to the darkroom to process the images, he was surprised to find the ghostly silhouette of a man, with marks of wounding in the feet and hands of a sordidly brutalized body.

Emerging more shockingly would be stark features of the face of a bearded man, dead, unmistakably showing particularly on the negatives. The visage of the dead man on the negatives has since been approved by the Catholic Church for contemplation by devotees to the Holy Face of Jesus.

Now at the dawn of the third millennium, another cloth has been found, initially alleged to be the cloth that “Veronica” used to wipe the bloody face of Jesus when he carried his cross to Golgotha, a very moving story except that it is apocryphal and not part of the Synoptic or Johannine gospels.

The “new” cloth is likewise claimed to be part of the burial clothes of Christ, but this one showing the eyes open. So does this contradict the Shroud of Turin? Which is the real burial cloth of Christ?

If German “Vaticanologist” and historian Paul Badde is to be believed—and he’s first-rate in investigative and historical spade work—both clothes came from the tomb of Christ.

Badde differentiated the Shroud of Turin as the burial shroud and the Veil of Manoppello as the facial cover of Christ.

There were two clothes in the tomb of Christ. According to the Easter account in the Gospel of John (chapter 20, verses 1-8), in the literal translation of the French Dominicans’ Jerusalem Bible, when the Apostles rushed to the tomb after Mary Magdalene frantically announced she had found the tomb “empty,” one apostle (traditionally believed to be John the Beloved or John the Evangelist, himself the “writer” of the Gospel) found the burial clothes; but Simon Peter following after found “the cloth that had covered Jesus’ head not with the burial clothes but rolled up in a separate place.” (Italics the reviewer’s)

As contrasted with the Shroud of Turin, the Veil of Manoppello therefore is the “burial veil” of Christ and corrollarily after he rose from the dead, in Badde’s words, “the face of the resurrected Christ.”

What is most remarkable, according to Badde, is that the images resemble one another. “When the image on the Veil of Manoppello is laid over the image of the face on the Shroud of Turin, the two images match perfectly. It is the same face.”

In his fascinating book, “The Face of God: The Rediscovery of the True Face of Jesus” (San Francisco: St. Ignatius Press, 2010; available on Amazon), Badde gives an account of the finding of the Veil of Manoppello, a rediscovery to which he himself has devoted so much time, effort and means often at the risk of ridicule and ostracism.

A former Jerusalem correspondent of Die Welt and the author of a celebrated book on the Guadalupe ikon, Badde led the German liberal daily to publishing the first astounding reports on the Veil of Manoppello. His book on the controversial cloth was originally published in Germany in 2006 (the book reviewed here is the English translation and US edition), and the book was praised by the rival Der Spiegel newspaper as “a gripping cultural thriller.”

Badde’s main contributions to the rediscovery are three:

First, he has established that the Veil is made of “byssus” or mussel-silk, a very ancient fabric that had been found in the graves of pharoahs and believed to be the material constituting the Golden Fleece in Attic mythology.

More relevantly, in the Bible, byssus is the prescribed fabric for the carpet of the Holy of Holies and for the “ephod,” the garment worn by the high priest. The fabric is like asbestos, resistant to fire, and more tellingly, resistant to dyes. Thus, the fabric cannot be painted on.

Second, Badde has been able to establish with convincing explanation that the Veil of Manoppello was the “Veil of Veronica” venerated from early Christianity up to the Middle Ages whose inexplicable image had come to be the model or chief template for the iconography of “The Christ”—from the Byzantine era (like the Vatican’s “Mandylion of Edessa,” said to be the oldest portrait of Christ), to the Middle Ages and even to the Renaissance era, as seen in the depictions of Christ in the art of Cimabue, Massacio, Raphael, the Flemish masters, and Durer.

And third, Badde has been able to establish that the cult of the Holy Face had all along been centered on the “Sudarium” or “burial veil” and the “Volto Santo” or “Holy Face,” and that the cloth disappeared in the 16th century in the flurry of construction of the new St. Peter’s Basilica, one of whose founding pillars had been planned in fact to house the Veil, and the chaos as a result of the sack of Rome in 1527.

Traces of the cult remain the frescoes and plentiful art in Rome. Yet the cult disappeared and its memory was retained merely in the apocryphal tale of the woman who wiped the bloodied face of the Christ with the intriguing name of “Veronica,” which is really a portmanteau of two Greek words meaning “True Ikon” or “True Image.” In fact one of the pillars of St. Peter’s has the inscription, “Sancta Veronica Ierosolymitana” (Holy True Face from Jerusalem).

Badde’s book accidentally portrays the rediscovery of the Veil as a Geman conspiracy. Which might not be remiss since at the outset of the Protestant revolution, it was the German Augustinian friar, Martin Luther, perhaps an iconoclast at heart, who inveighed against the superstition and traffic of indulgence and relics in Rome, ridiculing the Sudarium in particular. Since then, according to Badde, “A long tradition of decent silence (on the Veil) had at last been rewarded with indifference and oblivion.”

Badde doesn’t credit himself solely for the rediscovery of the Veil of Manoppello. His book in fact extensively discusses the work of German Jesuit Heinrich Pfeiffer of the Gregorian University, who announced in 1999 that the Sudarium had been rediscovered in Manoppello; and even before him, the Trappistine Sister Blandina Paschalis Schlomer, an artist and chemist who started her investigative work on the Veil as far back in 1979.

A contemplative nun of the Strict Observance branch of the Cistercian movement in Germany, Sister Blandina had taken a vow of silence, but, later dispensed by her superiors so she could do her research right in Manoppello, she, as Badde said, “has been talking ever since.”

And of course, there was Pope Benedict XVI who, by his extraordinary gesture of visiting Manoppello and praying before the Sudarium in 2006, not only gave credence to the rediscovery, but energized the Catholic devotion to the Holy Face of Christ. “Let us seek together to know the face of the Lord,” he urged the faithful, “and in the face of the Lord let us find this impetus of love and peace.”

Benedict likewise proclaimed 2006 as the Year of the Great Jubilee of Divine Countenance and elevated the Manoppello church into a basilica. In 2007, he signed the apostolic exhortation on the Holy Eucharist, “Sacramentum Caritatis,” which somehow echoed his message in Manoppello that devotion to the True Face must result in love and peace:

“The sacrament of charity, the Holy Eucharist is the gift that Jesus Christ makes of himself, thus revealing to us God’s infinite love for every man and woman.”

So is the finding of the Veil of Manoppello a German consiracy? Badde takes the matter with a grain of salt since its loss and rediscovery read like, as he writes, “a serialized novel about God’s humor.”

Postcript: Last September, Paul Badde came to the Philippines with his wife Ellen and Capuchin Fr. Carmine Cuccinelli, guardian of the relic and rector of the Basilica of Manoppello, to attend the first anniversary of the enshrinement of the Veil of Manoppello in the Parish Church of the Immaculate Conception in Nampicuan, Nueva Ecija. To date, the image in Nampicuan is the only official replica of the Veil outside of Manoppello. It is also a second-class relic since it was made to touch the original.