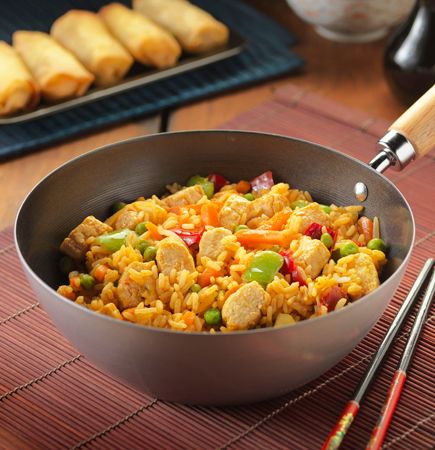 Before his interview could begin, Dr. Tim Finnigan, director of research and development of UK-based food brand Quorn, throws the first question.

“Have you not tried it yet?” the genial Finnigan asks. “We can talk about it for hours, but the best thing is to sample it, to let the food speak for itself.”

The fish fingers are soft and mildly flavored, the chicken nuggets tender and breaded to perfection. Beef and corn tartlets are so savory and filling, they become meals in themselves.

And subtly spiced Nuremburg sausages are presented two ways—enjoy them a la Pigs in a Blanket, or sliced and cooked with pasta in olive oil.

Here’s the catch: The meat in these tasty dishes isn’t the real thing; rather, it’s a meat substitute called mycoprotein.

Made from the fungus fusarium venenatum, mycoprotein is the main ingredient of Quorn’s wide range of products, from the fish fingers, chicken nuggets, sausages and mince to its spot-on replications of ham, turkey and even steak.

Available all over Europe, the US, Canada, Australia and New Zealand, Quorn was recently acquired by Monde Nissin Corp., one of the fast-moving consumer goods companies in the Philippines.

Beginning with the Food and Drug Administration-approved Mince, Quorn will be available in premium supermarkets soon.

Though it’s natural to assume Quorn was meant for vegetarians, its earliest iteration was actually intended for meat eaters.

In the 1960s, when it was predicted that the world would eventually run out of food, British industrialist J. Arthur Rank ordered a team from his Rank Hovis McDougall (RHM) Research Centre to look into the possibility of converting starch from cereal into protein-rich food.

Studies led the team to a garden in Marlow, Buckinghamshire, where fusarium venenatum grows. Following a decade-long evaluation of the fungus, mycoprotein became commercially available in 1985. Today, the brand is sold in 18 countries.

Produced through a fermentation process similar to bread, beer and yoghurt, then mixed with egg albumin (which works as binder), mycoprotein uses natural herbs and spices to achieve its savory flavor.

A freezing process, meanwhile, gives it a meat-like consistency that stumps even the staunchest carnivores.

Finnigan chuckles at the time a friend told his wife he was finally willing to try Quorn—only to find out she’d been feeding it to him for the past six months.

“We see that females have been smuggling Quorn into the household,” he says with a smile.

Another self-professed carnivore, accomplished chef and restaurateur Florabel Co-Yatco, admits she was hesitant when first approached to cook Quorn. Things changed after she sampled the chicken nuggets; Co-Yatco “couldn’t tell the difference” between the meat alternative and the real thing.

“The taste, texture and crunchiness were really very good,” she says. “My three-year-old daughter eats them. I could eat five of them!”

Impressed as well with how fast they can be prepared— popped in the oven, the nuggets were ready to eat in five minutes—Co-Yatco plans to create dishes made with Quorn and serve them in her restaurants. She already has a few ideas up—from an almondigas with misua and quesadilla to a pasta with Bolognese sauce and home-style tortang talong.

“The mince is very versatile,” she says.

Boasting 85 percent less saturated fat than lean beef and 200 fewer calories per meal, Quorn has zero cholesterol and is high in fiber, prompting “spectacular cases of weight loss over the years,” says Finnigan.

For a nonmeat product, Quorn is highly favored by meat eaters.

“In the UK, 70 percent of the people who buy our products are flexitarians,” says the R&D director, referring to those who consume vegetables and fruits but have not totally eliminated meat from their diet.

You don’t have to. “Meat is important economically, socially and culturally,” acknowledges Finnigan, who himself eats meat on occasion. “But awareness is growing globally: We also need to eat less meat because of its horrendous consequences to our health and the environment.”