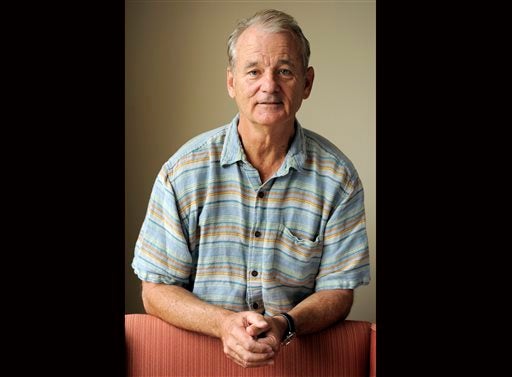 In this Sept. 9, 2012, file photo, Bill Murray poses for a portrait at the 2012 Toronto Film Festival, in Toronto. Murray will share some favorite poems in the April issue of O, The Oprah Magazine, which comes out Friday, March 25, 2016. (Photo by Chris Pizzello/Invision/AP, File)

A poet who knows it: Bill Murray shares some favorite verse

NEW YORK — Bill Murray has turned up everywhere from bachelor parties to baseball games, but his latest surprise has a more literary side: He shares some favorite poems in the April issue of O, The Oprah Magazine, which comes out Friday.

The “Ghostbusters” star is featured on a page dedicated to National Poetry Month, offering brief asides on works by Galway Kinnell, Lucille Clifton, Thomas Lux and Naomi Shihab Nye. For Clifton’s inspirational “what the mirror said,” Murray comments. “Everybody needs an ‘Attagirl!’ now and then.” Murray also includes Kinnell’s “Oatmeal,” with its reference to sharing a meal with the late John Keats.

“Alas, Kinnell, too, is now available for breakfast,” Murray adds, noting that the poet died in 2014.

The magazine’s books editor, Leigh Haber, had reason to believe Murray might agree to the project. He’s a longtime supporter of Poets House, a literary center based in Manhattan, and one year read works there by Emily Dickinson and others to a gathering of construction workers. Haber told The Associated Press during a recent interview that she contacted Murray through a mutual friend. Two months went by without a response. On deadline day, he called the magazine’s office and told Haber that he was in town and had some poems in mind. Because he didn’t use emails or fax machines, he suggested a meeting at his room in the Carlyle Hotel. Haber and an assistant headed right over.

“It was so funny,” Haber said. “He had scraps of paper on which he’d scribbled notes and Xeroxes of poems. His love of poetry was obvious from how much pleasure he took in reading the poems aloud to us.”

With business out of the way, Murray rolled out a glass cart and served martinis.

“An act of poetry all its own,” Haber calls it.

Murray’s other picks include Lux’s romantic ode “I Love You Sweatheart,” of which he said, “This poem vibrates the insides of my ribs, where the meat is most tender.” He also felt a personal connection to Nye’s “Famous” and its lines “I want to be famous in the way/ a pulley is famous/ or a buttonhole, not because it did/ anything spectacular/ but because it never forgot/what it could do.”