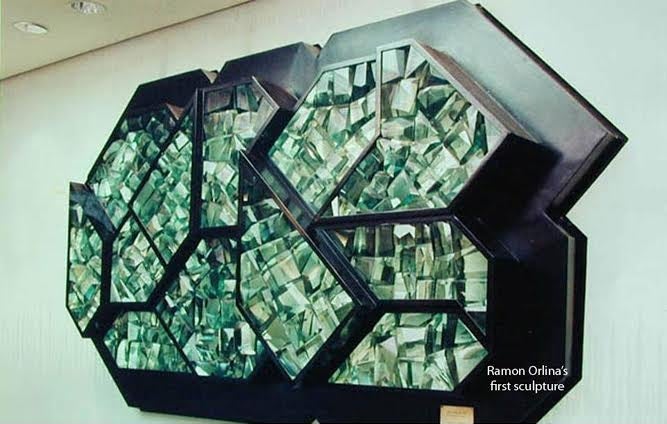 PERHAPS one of the biggest mysteries—a virtual arcanum— in Philippine art would be what made Ramon Orlina, a licensed architect with his own design and construction firm, turn to the difficult medium of glass in the 1970s, and pioneer and eventually stamp his identity on the very difficult medium, earning both local and international renown.

Blame it on martial law.

“When martial law was declared, I lost important clients of my architectural practice. That gave me time to explore more of my creative side,” Orlina told Lifestyle Inquirer’s Arts & Books. “So I decided to paint on glass as it was a different medium from traditional ones like canvas or paper.”

“It was my first salvo as an artist,” he recalled.

The choice of glass as medium betrayed his architectural temperament, always on the lookout for unorthodox building materials with which to realize his blueprints and visions.

His glass-painting technique was a novelty. “I was able to apply enamel-based paint on glass and make it adhere without baking,” he explained.

His artistic explorations of glass’ potentials were such that they caught the attention of Victor Lim, president of Republic Glass.

Orlina said Lim offered him a scholarship to study glass art anywhere abroad, “which I declined, not wanting to be beholden to the company.”

Orlina asked instead he be allowed to observe the operations of the glass factory.

“And they supported me by setting up a small studio within the factory, giving me free access to the equipment and knowledge of the engineers from whom I learned a great deal,” he added.

In 1976, because of the success of his glass-painting exhibit, Orlina was commissioned by Trinidad Enriquez of Silahis Hotel to create a glass painting for the lobby.

But Orlina said he proposed to architect-artist Lor Calma, who was designing the lobby, a mural in glass and metal instead.

Orlina explained his collaboration with Republic Glass had enabled him to develop a method of creating sculptures from residual glass, and the commission came at the right time.

“It was, indeed, timely as I was ready to produce my first sculpture work,” he said.

Perhaps prefiguring the fabulous liturgical works he would create for the Greenbelt Chapel and Edsa Shrine, the “Arcanum” series had deep mystical undertones.

“It was the first of the ‘Arcanum’ series, or the secret series, because of hidden symbols,” said Orlina. “I chose the number XIX because of the 19th alphabet, which is S, to mean the sun, as the sculpture glows with light.”

Orlina indicated he had taken into account that the sculpture would be strategically placed on the Silahis lobby.

“The sculpture faces Manila which is in the west,” he said. “Hence, the sculpture is the light from the east, which is why it is ‘Paradise Gained.’”

“Arcanum XIX” had 12 silver-coated bulbs in the interior of the sculpture to represent the 12 months of the year, said Orlina.

“Historically, glass-makers are called arcanists because each had [his] own secret formulas in making glass,” he explained.

Silahis has since closed down, and the sculpture is now on loan to the National Museum.

To mark his 40th anniversary as an alchemist-artist this 2016, Orlina will unveil a replica of “Arcanum XIX” on April 2 at Museo Orlina in Tagaytay City.

Orlina said the replica would be “two inches smaller all around as the metal frame is smaller but the area of the glass is the same.”

“The green hue of the glass is also different,” he said. “I wanted to place a replica in my museum to mark my 40 years as a sculptor.”

But unknown to many, the Silahis mural was not the first in the series. Orlina had done a glass-painting, “Major Arcanum II,” which was sold even before his “Reflections” show.

“It was sold prior to my ‘Reflections’ show as I needed funds,” the artist explained. “I left it in the gallery and in 10 minutes it was sold to a Dr. George Hodel, who has the honor of being my first art collector!”

“In fact, Doctor Hodel acquired four of my paintings in glass and afterwards also collected my glass sculptures.”

Because of the circumstances that attended the sale of “Arcanum II,” Orlina said the work was his favorite.

“The second piece I love is ‘Hibiscus,’ owned by Chito Madrigal Collantes,” he added. “The third is a colorful piece in the home of Peching and Evelyn Alcantara.”

Orlina said he continued to experiment with glass and combine the medium with other materials.

“There are still many potentials for working on glass,” he explained. “I am working only on the cold process. There are all the hot processes that I have not explored. I am also sourcing different colored glass to expand the range of colors and different ways of presenting it using new forms of lighting.”

In “QuattroMondial,” the monument he made to commemorate the 400th anniversary of his alma mater, University of Santo Tomas, he combined glass and brass.

“I have combined glass with other materials like wood, steel, stainless steel, cast bronze in many of my works. Or even worked solely on those mediums,” he added.

Lent and Easter have been useful for Orlina since the two Catholic seasons bring to the fore his fabulous works in sacred art.

His more recent works along that line are the “Stations of the Cross” in Kagami stained-glass for the Benedictine Abbey School (now San Beda College Alabang); and the 12-foot-high glass Cross in the Chapel of the Trinity University of Asia in Quezon City.

In Singapore, there’s the beautiful work “Quintessence” (4 x 2.5 m), in the chapel of St. Joseph’s School, now the auditorium of the Singapore Art Museum.

Orlina said he was now doing a commission for an outdoor sculpture from Bonifacio Global City.

“Glass is a difficult medium to work with for large outdoor works and very costly at that, which is one reason I have not done too many,” he explained.

He said his work in the visual arts had not dampened his enthusiasm for architecture.

“My plans are to build an architectural sculpture along the lines of Frank Gehry,” Orlina said. “I am waiting for such a project as I am a registered and trained architect to my benefit.”

“I feel a great sense of fulfillment and achievement,” he added, “for having created a significant body of works; for having elevated glass into a medium of fine art without a maestro, being self-taught, I developed the techniques and the art myself; and for having a private museum to share my art to anyone interested.”

Also to be formally opened at the Reflections Gallery of Museo Orlina on the same date is “Blue Shirt: Recent Works in Glass,” by Korean artist Dong-hoon Kwak.