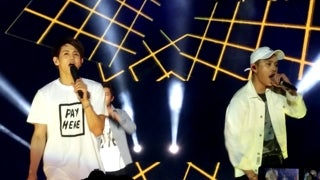 Despite sporting casual denim jackets and pants ripped in the knees, the youngest member of B2ST and adopted son of Sta. Rosa, Laguna, didn’t look shabby but godlike. He’s tall, dark and handsome. When fans screamed his unofficial Korean tag, “Son Namshin”—“Son the godlike”—they were merely repeating what many had known all along: that Son Dongwoon is a work of art.

Widely known for his baby-face looks and cute mannerisms that have earned him the tag “cutest guy on the planet,” the Beast main vocalist has taken to boxing to appear “manly.” He may have achieved that since fans now note that he’s become a hottie. But, sorry, Yoseob. Ordinary Fan Meeting (OFM) in Manila confirmed what many had thought all along: With your small face and well-chiseled looks (baby lips, high chin and brilliant eyes), you’re a doll, an eternal doll.

3. Yang Yoseob is a teddy bear.

Among the prizes for B2UTYs during the soccer-kick contest was a stuffed toy the Beast main vocalist promptly christened “Yoseob-edition Teddy Bear.” But Beast diehards would rather have the real thing—Yoseob himself—to cuddle.

If Son Dongwoon is handsome, Lee Kikwang, probably the most popular Beast member, is pretty. Filipino and international B2UTYs who came to the fan meet noted his kissable thick lips, his classically chiseled chin and jaw, and his famous “overdone eye-smile.”

Many Filipino B2UTYs became overnight worshippers of the rapper-composer who’s noted for his shyness and taciturnity, because, as one of those who came to OFM noted, he was “so handsome pala!”

In Korea, the Beast leader and oldest member, has often been chosen in surveys of women as their crush, so much so he has often been called “national boyfriend.” But include international fans as well: Dojoon’s looks are manly and cinematic—in the Oriental tradition of Toshiro Mifune, Tony Leung and Ken Watanabe. It also helps girls are impressed by his football prowess and overall athleticism.

Lead singer Jang Hyunseung might have been missed (his vocal parts were sung by Dongwoon, Kikwang or Dojoon), but by and large the Manila OFM underscored again that Beast was a vocal powerhouse. And in the ballads “Rainy Days” and “12:30,” Yoseob showed he possessed the best pipes in all of K-pop—a voice that could be both dramatic and lyrical, powerful and emotional, scorching and stirring. Beast is really the best.