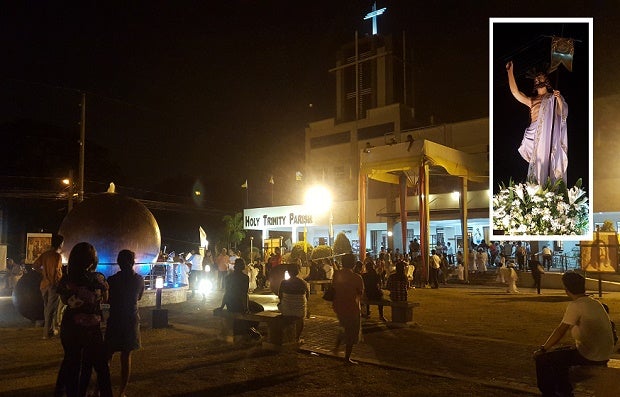 EASTER: Did Jesus really rise from the dead?

Many Catholics rose early this Sunday to join the traditional “Salubong” or the symbolic meeting of the Blessed Virgin Mary and her son, Jesus Christ.

On this day, Catholics, and many non-Catholic Christians alike, recall and celebrate the resurrection of Jesus — His rising back to life after suffering and dying on the cross, which were commemorated a few days earlier on Good Friday.

READ: GOOD FRIDAY: Why did God have to die on the cross? | After bleak week, Pope Francis offers Easter message

This remembrance is the most important of all Christian recollections and celebrations, even more than Christmas and all other religious holy days combined. That’s because the rising of Jesus back to life gives the assurance to every believer that they too will live again after they leave this world.

“But in fact Christ has been raised from the dead,” he continues in verse 20, and adds two verses later, “all will be made alive in Christ.”

Jesus Himself made this assurance: “I am the resurrection and the life. Those who believe in me, even though they die, will live, and everyone who lives and believes in me will never die.” (John 11:25-26)

But is Paul wrong? And did Jesus lie? Did Christ really rise from the dead? Or is it just a Roman Catholic invention to lure people into the Church?

Do Catholics and the Catholic Church have proof of this belief?

“The proof of the pudding is in the eating,” so a saying goes.

For Catholics, the proof is written in blood and in history—both written and oral, particularly in the Bible and the testimonies of witnesses.

Some might say that the Bible is itself “an invention” of the Catholic Church, which preserved, collected, collated and bound its many books, letters and documents into one volume.

They may criticize but they cannot deny that much of the Bible has been acknowledged as historic and that it can stand side-by-side with the accounts of many secular or non-religious historians.

It is within these Biblical accounts that the proof and the testimonies of those who witnessed Jesus die and rise from the dead are recorded.

One such proof was the empty tomb, where the body of Jesus was laid after His crucifixion—a gruesome death witnessed by a multitude in Jerusalem during His time.

Citing witness accounts, the Bible says that the body of Jesus was no longer at the tomb early on the “first day of the week,” or Sunday, the third day after Jesus died on the cross.

The tomb was empty.

Among those who saw the empty tomb were Mary Magdalene, Mary the mother of James and Salome. According to Mark 16:1 the three women brought spices to anoint the body of Jesus but He was no longer there.

The apostles Peter and John later also saw the empty tomb, according to John 20:3-8. The body of Jesus was no longer there and all they saw was the linen that wrapped the body of Jesus.

That tomb is now in the Church of the Holy Sepulchre in Jerusalem, a proof that it existed.

In modern forensics and law, the lack of a body could negate the claim that a person has died.

In this case, however, the “missing” body of Jesus is presented as proof that He had risen from the dead. There was no dead Jesus because He had resurrected back to life.

The proof of the empty tomb would subsequently be supported by the appearance of a risen Jesus to the disciples and the Apostles, who made up a big number of witnesses who would later testify that the Christ who died on the cross had indeed resurrected.

Numerous sightings and appearances of Jesus after His resurrection are recorded in the Gospels.

Jesus first appeared to Mary Magdalene, according to John 20:11-17. Later, He appeared to His Apostles (John 20:19-23). Jesus even showed them his hands and feet and let them touch Him to prove that He was real and not a ghost. (Luke 24:36-49) He even let the Apostle Thomas stick his fingers into the nail marks on his hands and the wound created by a spear on His side. (John 20:26-28)

Much later, Jesus showed Himself to His followers as He ascended or rose up to heaven. (Acts 1:9)

In all these, Jesus showed Himself to many people and witnesses to prove that He had indeed risen from the dead.

The testimony of one witness can be questioned. But it will be difficult to dismiss the testimonies of many witnesses.

The lives and deaths of many of these witnesses would later support their testimony about Jesus. For example, Apostles like Peter and Andrew allowed themselves to be crucified as a testimony to their belief. James, Thomas and Jude were reported to have been martyred because of their faith in Christ.

Many people base their beliefs on the mere claims of so-called “prophets” or “teachers.” Many say they rely on science or scientific hypotheses. Others base their convictions on mere ideas and suppositions.

For Catholics, their belief in the Resurrection and of Jesus rising from the dead is not only based on faith, but more solidly on the fact of an empty tomb, a “missing” body, and the testimonies of many witnesses who saw, heard, touched and encountered the risen Christ.

Later, many of these witnesses would willingly give up their own lives for this testimony, knowing and believing that if Jesus rose from the dead, they too, would rise again with Him to eternal life.

Bearing the same belief, many Catholics rose early on Easter Sunday as a sign of their conviction that as surely as the sun would rise in the morning, they would also rise with Christ in their own resurrection.