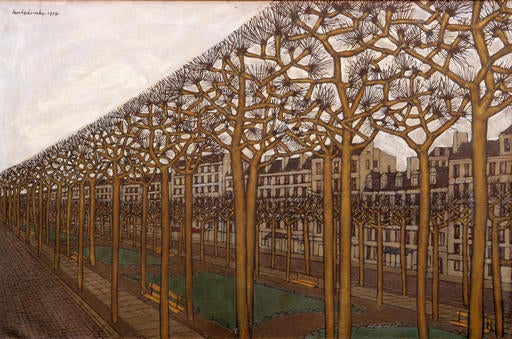 NEW YORK — A New York City exhibition explores the career of one of the foremost woodcut artists in America.

Ukrainian-American artist Jacques Hnizdovsky (hnihz-DOHV’-skee) was a master of intricate woodcuts of stylized flora, fauna — and also of paintings, including one that depicts a post-World War II refugee camp.

The exhibition at the Ukrainian Museum covers the breadth of his creative output, from 1944 until his death in 1985. It runs through Aug. 7.

Hnizdovsky’s works are in the permanent collections of many museums, including the Museum of Fine Arts, Boston; The Minneapolis Institute of Art; the Library of Congress; and the Philadelphia Museum of Art.

His graphic work and paintings display an immense clarity and intricacy of detail, whether it’s a singular tree, two rams locking horns or a hand-colored woodcut of string beans in a crate. TVJ