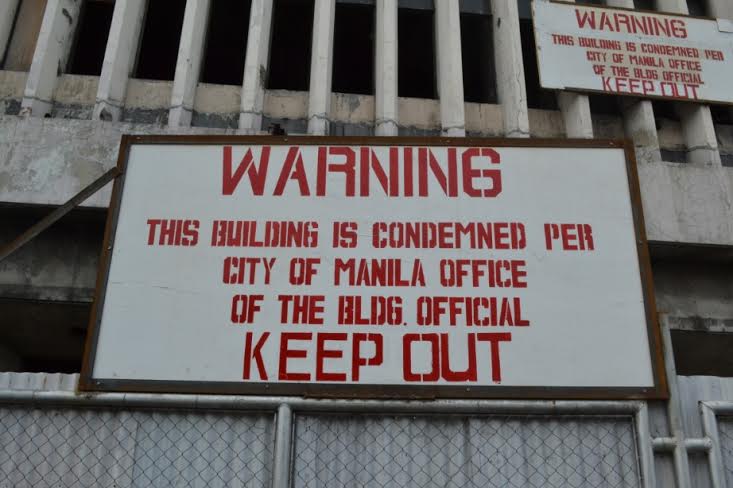 ANOTHER heritage structure is feared to follow the fate of other important buildings in Manila that have been torn down in recent years under the administration of Mayor Joséph Estrada.

In danger of being demolished is the iconic Philbanking Corporation building on Anda Circle in Port Area, Manila. (The edifice later became the Bureau of Internal Revenue building.)

The demolition became likely after a sign was posted around the building last week—“Warning. This building is condemned per City of Manila Office of the Building Official. Keep out.”

A source from the Building Office of City Hall, who said he could not provide an interview unless cleared by the City Mayor’s Office, said the warning sign was not a condemnation but an “assessment.”

He added the assessment was made on the request of the Philippine Ports Authority, which owns the building.

Despite the sign saying the building had been “condemned,” the official said it hadn’t been officially condemned as City Hall still had to conduct “a series of hearings and a final inspection.”

Zaragoza was posthumously declared National Artist for Architecture in 2014.

Philbanking is a presumed important cultural property under the National Heritage Act, since it is at least 50 years old and designed by a National Artist.

Heritage Conservation Society chair and former Manila Tourism and Cultural Affairs Bureau director Gemma Cruz Araneta urged that Philbanking be conserved. She explained the building was “handsome” with a unique design “suitable for a tropical climate like ours.”

“Why demolish? Why not repurpose and conserve?” said Araneta, the country’s first international beauty queen.

She also appealed to structural engineers, particularly those at the Manila City Hall, “not to be trigger-happy” with heritage structures.

Araneta said she was supporting the position of Dominic Galicia, International Council on Monuments and Sites (Icomos) Philippines president, to save the structure.

Galicia, a conservation architect, said the “building is a weapon against and a counterpoint to the abject mediocrity that often passes for architecture today.”

“What namby-pamby mutterings are being used to justify its condemnation?” Galicia asked.

According to the book “José María V. Zaragoza: Architecture for God, for Man,” by Ruben Defeo and Maria Lourdes Zaragoza Banson, the building’s original owner, Philbanking Corporation, vacated it for the National Power Corporation (NPC) in the early 1970s.

It was occupied by NPC until 1981 when it was sold to BIR, which abandoned it a couple of years ago.

The book describes the design of the building as along the International Style, undulating curves with brise soleil (sun baffles) which serve structural and decorative purposes.

“Standing majestically like two cubic forms in dramatic juxtaposition, it lords over Anda Circle in Intramuros,” the book notes.

An Inquirer article by conservation architect Augusto “Toti” Villalon in 2004 says Zaragoza was one of the guest architects invited to Brazil by legendary architect Oscar Niemeyer in 1960 to help design projects for the Latin American giant nation’s new capital, Brasilia.

Villalon notes the Philbanking building together with Meralco Center and the Commercial Bank and Trust Company building are his post-Brazil projects in the country, in which he incorporated touches of Brazilian architecture.

The buildings, he says, “insinuate the subtle flowing Latino lines of Brazilian architecture.”

The National Museum (NM) is set to declare the American-era Paco train station and other heritage railway stations in Luzon as Important Cultural Properties (ICPs).

The William Parsons-designed Paco station will also be restored by NM with the Department of Transportation and Communications and a number of architect organizations.