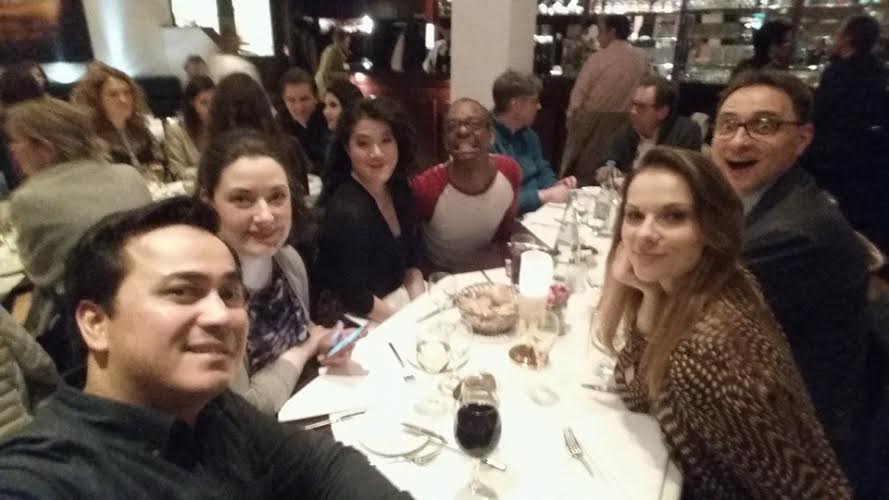 ARTHUR Espiritu (foreground) with colleagues in Frankfurt Opera’s third revival of “Il Trittico.” The Puccini triptych is an audience favorite.

FILIPINO tenor Arthur Espiritu made his auspicious debut in the new building of Frankfurt Opera recently in an evening of three Puccini operas that lasted a little over three hours.

Billed as “Il Trittico,” the operas were “Il Tabarro” (The Cloak), “Suor Angelica” and “Gianni Schicchi,” in which he sang the role of Rinuccio.

“The acoustics were great! I must say it is a very good theater to sing in. The audience loved all three pieces. Puccini really knows what he is doing in ‘Il Trittico,’”   Espiritu said. “The audience last night was very enthusiastic and I think Frankfurt audiences are so nice and receptive.”

He was all admiration for the Michele of Zeijko Lucic and the Suor Angelica of Elza van den Heever: “It was the two powerhouse singers of the evening that just carried the show.   Lucic was amazing. You can see his Rigoletto at the Met on high definition if you want to know him a bit more. And also Van den Heever as our Suor Angelica. What an amazing voice and talent.”

Although Rinuccio is not associated with any popular aria, Espiritu found his role musically challenging: “What I found challenging in Rinuccio is that, musically, it’s quite difficult. There are meter changes and you really have to count all the time. You can’t rely on what you hear in the orchestra. And also what the conductor cues you. You have to be right on time. As for the aria ‘Firenze Come un Albero Fiorito,’ it is written so weird that there is no punctuation at the end of the aria that one would feel like there has to be an applause cue, but no. Puccini wrote it in a place where Rinuccio introduces Gianni Schicchi. So, no tenor glory there. After singing high tessitura lines and all those difficult passages that ends in a held high B Flat, it continues on to the next scene. So, no glory for Rinuccio, sadly. But, I can honestly say that it was a fun role to do. I felt that I was in the story and part of the development. However, I’m on stage about 90 percent of the time.”

The Gianni Schicchi role is his second Puccini opera after singing Rodolfo in “La Boheme.”

“I love singing Rodolfo. I can truly relate to it and it has a special place in my heart. Not so much Rinuccio, because I don’t really relate to the character as much,” he said. “Beautiful music, but nothing about the role touches me. It is a vocal feat and a lot of fun to sing, but it is not substantive enough for me.”

Also, he finds it too short, though, very funny and entertaining. “It just speaks for itself. Greed is subject to karma. But I had a wonderful time with really great and professional colleagues. Everything worked well together on opening night. I’m glad I was a part of it.”

After Frankfurt Opera, Espiritu will have three performances of “La Boheme” in Magdeburg and another repeat of “La Sonnambula” in Munich, which, he sings Elvino.

The last Filipino tenor to sing at Frankfurt Opera was Iloilo-born Otoniel Gonzaga, who was soloist of the opera house for several seasons.