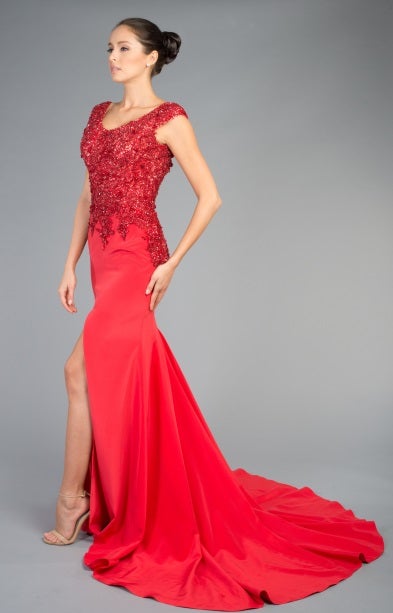 Have you told the press this story?” I asked fashion designer and friend Oliver Tolentino on a recent visit to his Makati boutique.

“No, it’s a personal story, and everyone was focused on the finals night,” said Oliver, who was referring to the night Pia Wurtzbach was crowned Miss Universe.

“It’s OK, because I was just happy to help Pia and the country, and I’m so happy she won,” he added.

I told Oliver I didn’t want to let this story slip by without sharing its message with the readers. So I asked Oliver permission to write about it.

By sharing this, I hope everyone will appreciate how special the moment was when Pia wore Oliver’s red “rescue gown” to the preliminaries, and how his is a beautiful story of serendipity and motherly love.

From the time Oliver was born, his doting mom Lydia instilled in him the values of generosity, humility and hard work. They shared a love of watching television programs together, including the Miss Universe pageants.

He would crawl into bed, snuggle with his mother and watch in their home in Orani, Bataan. He often boasted that one day he would dress a beauty queen, and she would win. Lydia would smile at her son, whom she always advised “to dream big, because it’s free to dream.”

Seeing that Oliver was interested in fashion at an early age, Lydia bought foreign fashion glossies for him on trips to Subic Bay so he could study the fashion of the Hollywood stars. Oliver’s schoolbooks quickly filled up with sketches.

Even if it was obvious to his mother that Oliver was destined to be a designer, Lydia nonetheless wanted him to get a college degree so he would have something to fall back on. Even though Lydia was Oliver’s No. 1 fan and inspiration, she worried about her son.

Her kindness to everyone and her love of nature inspired Oliver. Lydia continued to support his dreams until she died of complications from diabetes in 2000. It was on her deathbed that Lydia told her son, “Anak, all of your dreams will be fulfilled, including dressing a beauty queen who will win the crown for the Philippines.”

Fifteen years later, in mid-2015, Oliver thought of including a simple yet elegant red gown in his 2016 Spring/Summer collection. He decided on a sleeveless crepe de chine gown with Swarovski-encrusted bodice and thigh-high slit. It was the only red gown in the collection and, he admits, not the hardest to construct.

But for some reason or another, the gown went back and forth from design to production for changes, a total of four times.

First, it was the slit Oliver wanted to repair. Then it was the beadwork and, finally, the addition of a longer train. It is rare that a gown undergoes so many alterations, without a specific client for it. Oliver didn’t give up until he was satisfied.

Oliver was skiing down a mountain in Aspen, Colorado, last December when he felt his cell phone vibrate through his heavy jacket. Someone in Las Vegas, in a panic, was on the line asking for Oliver’s help; it was an emergency.

“I was on vacation when the call came in,” Oliver said. “They kept telling me that Pia didn’t have a proper gown for the following day. After my initial shock and confusion—how could this be happening the day before the preliminaries?—I agreed to do whatever I could to help our candidate.

“I called my Beverly Hills boutique and had them prepare nine gowns. I even included two cocktail dresses in case there was any other event Pia might not have a dress for,” said Oliver. “I also wanted to provide as many choices as possible because I knew there would be very little time for a fitting and I wasn’t going to be there, so I chose gowns over the phone quickly, from memory.

“Pia wasn’t going to get the gowns until that evening, and I knew how important it was to get the gown issue behind her so she could be well rested the night before the pageant,” Oliver noted.

Oliver said that Pia’s team initially had picked out the gowns from his website that they felt would suit her, but those gowns had already been sold. Pia’s side requested blue gowns. Oliver sent some but decided to include the red gown—the one he felt would work best.

Walking in the hotel lobby

The red gown was the second Pia tried on, and it fit perfectly. The cut and design did not overwhelm her face and figure, a must in any evening gown segment.   Pia reportedly didn’t want to take it off and immediately practiced walking in it in the hotel lobby.   There has been much debate over who wanted Pia to wear which gown but, ultimately, the decision was Pia’s. Sources say she wanted, and felt most comfortable in, the red Oliver Tolentino gown.

As they say, the rest is history. Pia was the only one in red in the preliminary grouping and advanced among the top contenders for the title, eventually winning one of the most memorable Miss Universe pageants ever.

Without Oliver’s last-minute gown, we have to wonder if Pia would have advanced to the finals.

While Pia’s own story deserves much attention, the story behind Oliver’s red gown is also a wonderful one. Oliver’s participation in Pia’s journey was not planned. It was fate that Oliver would fulfill his mom’s biggest dream, and in a happy moment in our nation’s history.

Pia herself must have understood the importance of what he did, because one of the first things she did after her win was to record a “thank you” video to Oliver, which I found on YouTube.

And just like in a fairy tale, the red gown, which was a disappointment in the beginning of our story, had a higher purpose, after all. The gown is a reminder not only of the great win for the Philippines, but also of what Oliver and his mother shared.

What a fitting tribute to the mom who brought up her son well. I’m sure she cried tears of joy in heaven that day, seeing a dream come true for her son.

Oliver became the first Filipino designer in years to have his gown worn in a Miss Universe pageant by the Philippine bet—a victory, in itself, for many diehard pageant fans.

And, as if by divine intervention, Pia Wurtzbach was crowned Miss Universe on Dec. 20, which was Dec. 21 in the Philippines—Lydia’s birthday!

Incidentally, Oliver marks his mom’s birthday annually by celebrating it with a hundred street children, and this year was made even more special with Pia’s win.

I hope this will remind all of us never to miss an opportunity to help others, no matter how big or small our contribution may be. We may not know that serendipity is helping us fulfill other people’s dreams, and perhaps even a promise to our mother or anyone else out there who encouraged us to dream big.