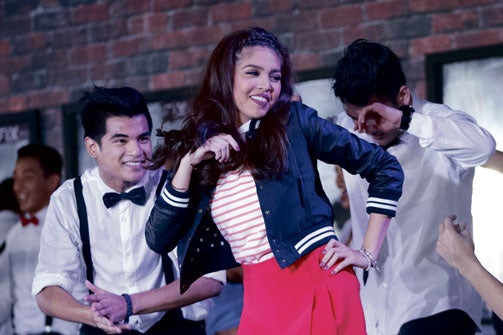 Trinoma mall was buzzing with activity on March 30 when Alden Richards and Maine Mendoza were introduced as the new brand ambassadors of Bench.

The energy in the mall was palpable. From the Activity Center at the ground floor all the way to the fifth floor, people were lining up trying to get a glimpse of the two celebrities who were there to launch a new fragrance line and endorse a hair product.

Collectively known as AlDub (a portmanteau of the names of the characters they play on television), Alden Richards and Maine Mendoza are a supercouple who star in a kalyeserye, an unscripted, improv soap-opera parody segment in the long running noontime show “Eat Bulaga!”

It was on the show that the two first met and tickled the fancy of lovestruck Filipinos everywhere.

Even during the product launch in TriNoma, it was evident that Mendoza’s appeal is rooted in her authenticity. During her dance numbers and while Richards was singing, she would make her signature funny faces and do the “pabebe wave,” but her smile was real.

Every time the two held hands, Mendoza had the aura of a young schoolgirl going out with her crush, beaming not only at Richards but at the crowd, as well. Even the attention and adulation seemed to surprise her. In that moment she looked exactly like who she was—a young woman coming out of obscurity and being put into the limelight.

In a way, Mendoza personifies every girl who dreams of becoming a celebrity overnight.

Looking at Richards, it’s easy to see why he was given the moniker “Pambansang BAE.” Boyish good looks, a manly physique and well-kept hair add up to that boy-next-door charm that would make any teenage girl, admittedly even ones well beyond puberty, fall for him.

It was only natural then for Ben Chan, owner of Bench, to tap Richards as the new face of Bench Fix Salon and product endorser for Clay Doh Lite, the salon’s most popular hair product. Richards, for his part, said that even before he was an endorser, he was already using the hair product.

They gamely answered little- known details about the two such as Mendoza’s favorite food—isaw, in case you were wondering—and her favorite color, pink.

Fans said that they had been in line to get in since 7 a.m. but they didn’t mind that the launch started at around 6 p.m. That’s almost 12 hours, no small feat on any day, but even more amazing, considering it was a Wednesday.

Some came all the way from Bacolod. This showed just how enamored people are not just with AlDub, but with Richards and Mendoza themselves.

While they may be playing characters in a soap-opera parody, they are also effectively playing themselves, which makes their tandem much more organic and only adds to their appeal and relatability.

Critics of the two have not stopped saying that AlDub is a fad, and that the people’s adoration will end sooner than later. However, the two are continuously proving the bashers wrong with all the products they currently endorse. 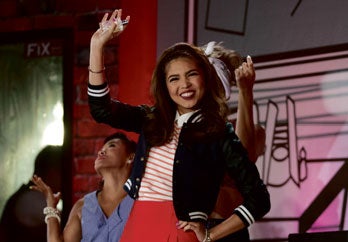 As a product endorser for Bench, Mendoza was given her own fragrance line, which was launched at the event. The line includes “Dab for Love,” an eau de toilette with hints of cherry, raspberry, marshmallow, vanilla, and coconut and body sprays with names like “Maine Girl,” a floral fragrance with notes of mandarin, raspberry, peony, and cedarwood; “Maine Forever,” a citrusy scent with hints of lemon blossom, wild rose, and musk; and “Maine Love,” a combination of apple, jasmine, and sandalwood.

Further proof of Mendoza’s popularity was that the TriNoMa branch of Bench sold out all of the scents only a few minutes after opening.

The packaging of the scents is inspired by Mendoza herself. Eclectic and clashing but pleasant colors, representing her quirkiness, with drawings of lipstick hearts and ribbons show that, in spite of her fame, she’s still a young girl at heart.