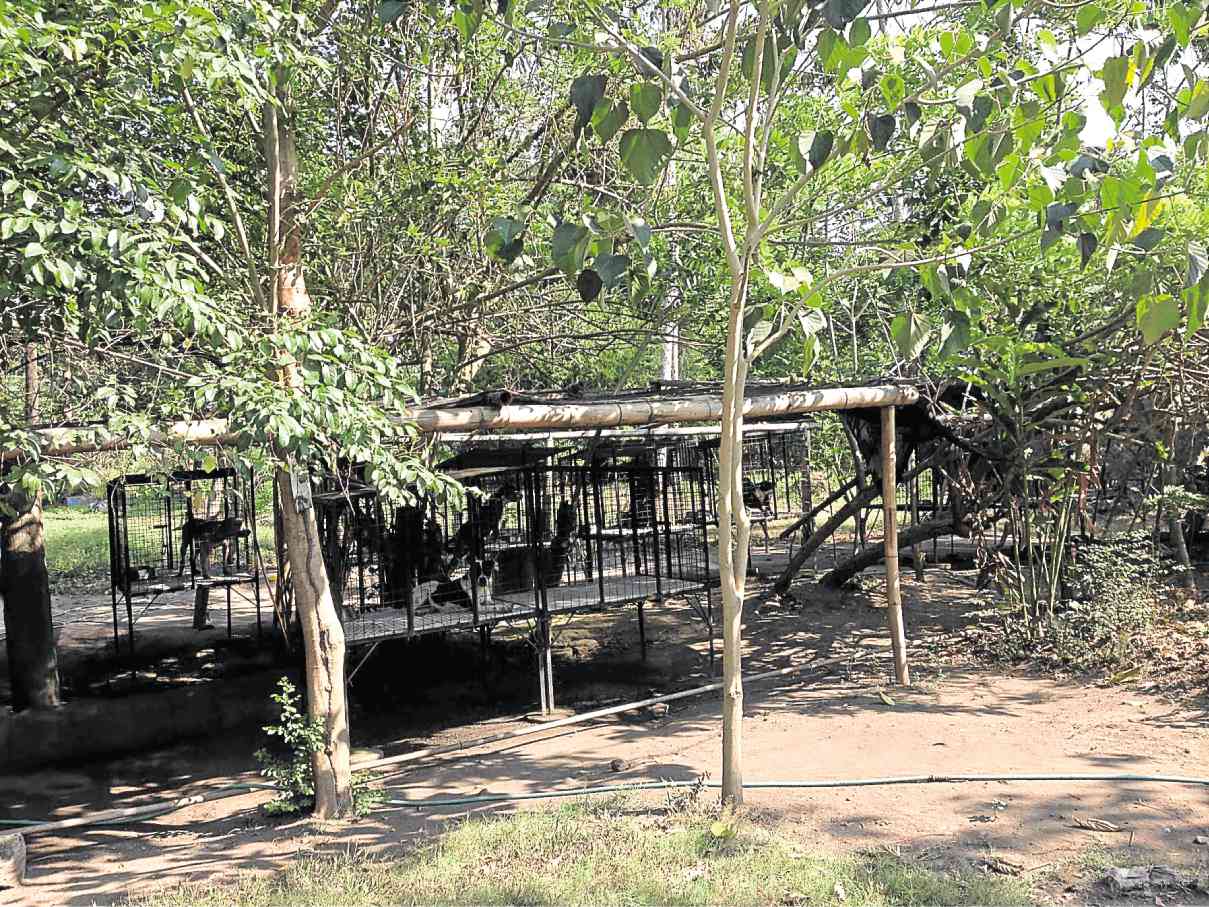 Finally, these ‘fighting dogs’ can just be dogs again

It was early on a Sunday morning when I met up with my friend Owen Santos, a writer and a volunteer with the animal welfare group Compassion and Responsibility for Animals (CARA) Welfare Philippines, for a road trip. I was beyond excited; after four years, I was going to see the Laguna pit bulls again.

It was 2011 when I had my first encounter with pit bulls brutalized by dog fighting. It was almost midnight, a few days before Christmas, and a first batch of animals rescued from a raid in Indang, Cavite, had just been transported to the Philippine Animal Welfare Society’s (PAWS) Animal Rehabilitation Center in Quezon City.

Many from that first batch wouldn’t survive their wounds and illnesses from lack of care by their abusers; first responders in Indang recounted seeing a deep pit full of dead dogs, thrown away like garbage after death in the ring.

Eventually, the Indang dogs were moved to the Island Rescue Organization (IRO) in Cebu, headed by Nena Hernandez, who has tirelessly cared for them (www.iroislandrescue.org).

Three months later, on March 30, 2012, another raid was conducted in Laguna, and the same Koreans behind Indang’s high-tech operation were caught; they were later found guilty of illegal gambling, animal abuse and sanitation violations, and served time in the Philippines before being deported.

CARA took on almost 300 dogs—some dying from wounds and injuries, some with liver problems from steroid injections used to numb them in preparation for fights. It was touch-and-go for a while, with a mad call for donations and volunteers.

CARA and their volunteers never gave up, however. The dogs were eventually transferred to their current sanctuary in Laguna.

The first time I visited the dogs on site with animal welfare activist Maria Parsons on Good Friday of 2012, my heart broke at the sight of the animals, chained to the hot, rusty cut-off steel drums that they lived in. In October 2012, when a few of us media people returned for an update, they were living in cages and being walked by caretakers, but much money was still needed for their upkeep.

When Owen and I arrived at the sanctuary in Laguna last April 3, the air was unmistakably different. I was still welcomed by howls and barking, but they were no longer the wails of wounded dogs. The erstwhile fighting machines had become shameless, enthusiastic cuddle whores, begging for attention, a walk, a treat.

“They are so very different now,” says CARA president Nancy Cu Unjieng. “They have put on much-needed weight, their skin looks healthy and shiny, and they have happy expressions on their faces.”

From almost 300 dogs in 2012, CARA is now caring for 120 survivors. Several have passed away, but there have also been 17 fairy-tale endings for lucky adopted ones.

There’s Tinkerbell, a cutie who now lives in Los Angeles, United States, and Owen’s own chunky princess, Ruby. A lovely black pit bull named Mama has gone home with volunteer Keith Salas, is spoiled rotten, and is even helping raise a new puppy.

“The past adoptions are only the tip of the iceberg, as there are so many more adoptable pitties at the center waiting for the right person and family to give them their forever homes,” Nancy says.

In the center today, in fact, there’s a section for the “adoptables,” dogs who have been socialized, fostered, brought to several CARA events, and are ready to be taken home. It can be a frustrating encounter; you wish you had the space, the time and the limitless resources to bring home two, or three.

Although many would be best as only dogs, because they still react to cats or other animals, some of the adopted dogs are actually living peacefully with new canine brothers and sisters.

The “adoptables” are absolutely gorgeous. There’s Pesto, so named because he was turning green from the leaves they were applying on his many wounds when he was first rescued; today, he’s fat, clean, and loves to assault people with wet kisses. Maria and I first saw Banana sitting in the shade of (what else) a banana tree; now, she’s frisky, trusting, and gets along grandly with her BFF, another beautiful girl named Ensay (for ensaymada, her favorite food).

Sarsi loves car rides, Cali stuck her head under my armpit when I was giving her a bath, and bright-eyed Bumpy, still a little timid (a bait dog, we assumed), is small enough to sit on your lap.

And then there’s my favorite, an enormous teddy bear of a dog named Miguelito, who looks like a fighter, but who willingly let me scratch his huge belly, walk and bathe him, and even examine his teeth and paws.

Although I still found myself praying that all the dogs find loving homes in their lifetimes—last March 30 marked four years since their rescue, and dogs don’t live very long—the atmosphere now is one of hope and love.

The dogs who used to cower in fear when approached now beg for treats and rush out of their spacious, clean cages to be walked or to play. Near noon, the dogs quiet down and nap in their pens under the trees—“My favorite time of day here,” Owen says.

Volunteer Melody de Jesus took promotional photographs of some dogs for today’s Waggin’ Tails event (2-6 p.m., Bonifacio High Street), dressing them in collars, necklaces and little hats. I squealed with delight because they were so darn cute, but also because, I realized, something beautiful has happened: The pit bulls have learned to trust and become carefree dogs again.

“There is really no such thing as an evil or vicious dog,” Nancy says. “I have been visiting every dog in every cage for four years, and not one shows any anger now. They are aware that no harm will ever come to them at the center. My being has been energized and touched by this forgiving and lovable breed.”

Of course, hurdles remain. There’s still that stigma attached to pit bulls; Owen talks about people hurriedly getting out of her way when she’s walking Ruby. While caution is always prudent, and every individual is different, the fact remains that pit bulls can indeed be as gentle as other breeds, and that generalization and discrimination are just different forms of cruelty.

Then there is the cost of running the sanctuary, upwards of P200,000 a month, most of which goes to dog food. The dogs consume three large sacks of food, mixed with vegetables and rice, every day. There are medicines, maintenance, salaries of five full-time caretakers and other expenses.

There are many ways to help other than adopting, though. One can sponsor one dog’s food and medical costs, or pledge monthly donations, through the Pit Bull Rehabilitation Project. As a nonprofit animal welfare organization, CARA also advocates humane education, and the spaying, neutering and adoption of rescued dogs and cats.

A delicious way to be of help is coming up on April 23, Saturday, at the Robinsons Magnolia Garden: the Bow & Wow Benefit Dinner for CARA. The all-natural pet store has partnered with CARA for a night featuring human food by Gaita Forés’ Cibo di M, no less, wine from Planet Grapes, and a pet buffet (!) by ALL4PETSParty; yes, you can bring your dog. (My asPin Kikay and I will see you there.)

Back in Laguna, as Miguelito leaned against me, memories of how much these babies have suffered came to mind. Then I looked into the face of this creature—content to live in the moment, roll in the dirt or munch on a cookie—and I remembered, oh yeah, these are dogs. And with dogs, love can always win.

Check out helpsavethepitbulls.com or the Save the Laguna Pit Bulls page on Facebook to find out how to volunteer, visit the center, donate or adopt. Please note that potential adopters are screened for the safety of the dogs.