‘People are hungry. Why not do something about it?’ | Inquirer Lifestyle ❮ ❯ 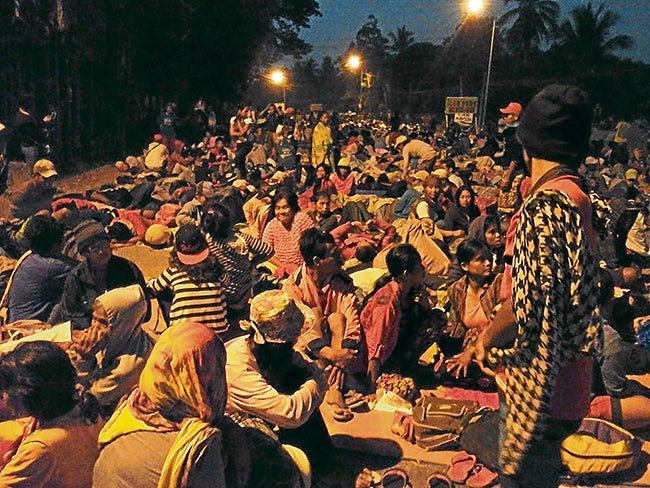 ‘People are hungry. Why not do something about it?’

Jerome Succor Aba was on the frontline of the brutal dispersal in Kidapawan on April 1. He survived almost unscathed, save for a leg injury caused by a rock. That he wasn’t hit by one of the bullets that rained upon the hungry farmers from seven municipalities and one city in North Cotabato was just pure luck. “’Yung katabi kong farmer na-head shot. Kung hindi ako nakadapa, ako ’yung tatamaan,” he told Inquirer Super.

Shahani Gania, also known as Super Starlet, stylist, artist and Madonna’s Unapologetic Bitch in Manila, was one of countless people who reacted on Facebook to news about the violent standoff and the plight of the El Niño-affected farmers.

“I was posting and posting about it and suddenly, naisip ko, why don’t we just do our own drive? People keep talking politics but wait, there’s a calamity. People are hungry. Let’s focus on that. Tulungan natin ’to, imbis na magturuan. I started tagging people, like Sharon Atillo of Today X Future.”

Sharon said yes to doing a fund-raising event at the popular bar, Shahani reconnected with his college best friend Amtares Bartolome who helped him find artists who would perform, and Shahani’s former orgmate in UP, Pamela Carbonell, who is a documentary filmmaker, also helped find artists to perform.

The event “Rice Up and Dance!” was born, featuring DJs OtherJoseph, Pam Carbonell, IbarrasVsnstock, and live performances from Joee & I, Los Indios Bravos and Alay Sining.

Jerome was also present to talk about what happened that bloody day.

But Shahani wasn’t happy with the turnout: “To be honest, I was sad about the event. People change their profiles in solidarity with Paris, but there’s a problem here and there’s someone who knows what happened and who can talk about it but they would rather look away. We had a chance to help the people in Cotabato, we had the chance to hear about it from someone who was there, why didn’t we take it? People really need help. May mga Pilipinong nagsa-suffer. They’re so hungry they were eating rats and coconut husks.”

Shahani decided that the P7,770 and sack of rice they collected in the event wasn’t enough. He said he needed to keep collecting more donations: “I am a very unhappy Filipino, reading everything on Facebook, saturated with everyone’s comments, fighting about their choice of president. I’m really, really tired of complaining, tired of hearing people complain. Why not do something about it?”

He decided to continue his campaign where the people are: on Facebook.

“I didn’t go out that weekend,” he said. “I edited the video of Jerome speaking in the event and I kept posting.”

Soon, more and more people contacted him to pledge their donations, like Paolo Ballesteros who was one of the first to donate, Front Row, model Bruce Venida who pledged his earnings from Manila Fashion Festival, someone who donated P60,000. “Masaya na ako ngayon, people have been messaging me, nakaktuwa. I’m very happy because I feel like it’s starting pa lang.”

Shahani has a message for people on social media: “You’re more than just Facebookers or Instagrammers or Snapchatters, you want to change the world, you know things. Nakaka-frustrate to live through a monitor. The problem is still there. Do something about it. Don’t be afraid to help just because they’re on another island. They have the same skin color we do. We sing the same national anthem. We pledge allegiance to the same flag. Don’t be afraid to help them. Huwag tayong dedma.”

If you want to help, find Shahani Gania on Facebook (www.facebook.com/gloriouspopstar). Cash is encouraged because donations of rice will have to be shipped, entailing additional costs that could otherwise be used for food. Documentary filmmaker Pamela Carbonell will head to Cotabato on Monday with Balay Mindanao to deliver the donations to the farmers.